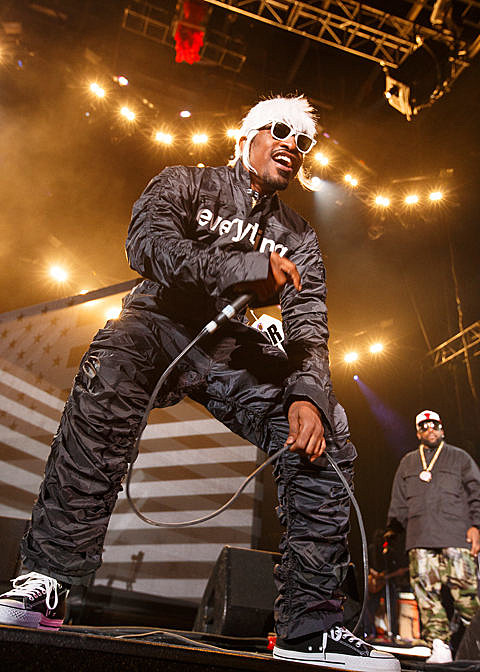 Governors Ball @ Randall's Island
NYC's Governors Ball continues to grow and rival the other major US festivals. It returns today for its first of three days with a ton of great artists including a long-awaited reunion set from Outkast (unfortunately at the same time as Blur/Gorillaz main man Damon Albarn), TV on the Radio, Grimes, Phoenix, Neko Case, La Roux, Jenny Lewis, Washed Out, Janelle Monae, Kurt Vile, and plenty more.

King Khan & The Shrines, Red Mass @ LPR
An excellent, all-Canadian garage-pysch-soul double bill with the wild and awesome King Khan & the Shrines, plus Montreal true believers Red Mass. This is their first of two NYC shows.

Diarrhea Planet, Music Band, Black Wine, GODS @ Asbury Lanes
Nashville garage rockers Diarrhea Planet are one of those bands you "have to see live" and from their raging stage show, it's clear why.

The Spook School, Heathers, Lost Gloves, Light Therapy @ Matchless
This show features two of the highlights of the just-passed NYC Popfest: Scotland's The Spook School make punky indie pop and feature a drummer who could probably host a TV show if rock n' roll doesn't work out; Heathers make scrappy indie rock a la The Wedding Present (who they just might cover).

Syd tha Kyd, White Sea @ Baby's All Right
Interesting double bill at Baby's tonight with a set from Odd Future's Syd tha Kyd and another from White Sea, aka Morgan Kibby's (of M83) other band.

Fucked Up, Big Ups, In School @ Bowery Ballroom
Fucked Up's got a new album out, Glass Boys, which may be their closest yet to a straightforward rock record. But none of that should matter tonight because whether or not Fucked Up are at their most ambitious or just playing it straight, their live shows are a big, sweaty mess of a party. Both openers are good too.

AlunaGeorge, Trippy Turtle @ Irving Plaza
AlunaGeorge may be best known for their contribution to Disclosure's "White Noise," but their Body Music LP has plenty of its own good material too.

James Blake (DJ set), 1-800-Dinosaur, Airhead, Dan Foat, Mr Assister @ Output
James Blake is now as much a singer/songwriter as he is an electronic producer or DJ, but it's worth remembering he's still very good at the latter.

Jucifer, cleanteeth, Mammal @ The Acheron
Sludge duo Jucifer may only have two people, but from the stacks of amps the guitarist packs the stage with, they can still create a massive wall of sound.

Majical Cloudz, Dutch E Germ @ The Studio at Webster Hall
Canadian duo Majical Cloudz are getting ready to go on tour with Lorde -- a strange double bill for anyone who's seen their intense live performances. Here's a chance to see them in a much smaller setting than in the fall.

Smokey Robinson @ Beacon Theatre
Singer of some of the best songs with "Tears" in the title -- among many other greats -- Smoky Robinson is a true legend.

Andrew Bird @ BAM
With a new album of Handsome Family covers out now, Andrew Bird plays tonight as part of BAM's RadioLoveFest. Of note, Tift Merritt (no slouch in her own right) is currently part of Bird's band.