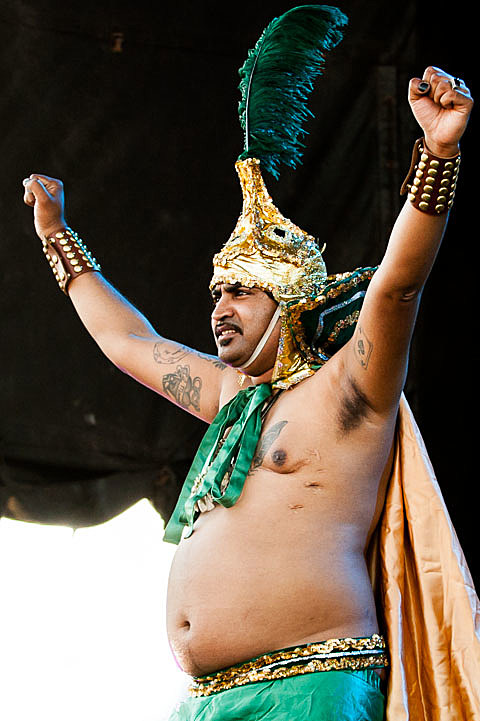 Governors Ball @ Randall's Island
NYC's Governors Ball continues to grow and rival the other major US festivals. It continues today for its second of three days with a ton of great artists including Jack White, Spoon, The Strokes, Disclosure, Broken Bells, Chance the Rapper, Classixx, Deafheaven, Diarrhea Planet, and plenty more.

This American Life: One Night Only @ BAM
Perhaps NPR's most popular program, Ira Glass' storytelling showcase does something it's never attempted before: an evening of journalism presented as radio drama. Featuring a mini-musical by Lin-Manuel Miranda, with stories from Mike Birbiglia, SNL's Sasheer Zamata, songs from Stephin Merritt, and more.

Classixx, BAIO @ Brooklyn Bowl
One of the official Governors Ball afterparties, it's a solid double-bill of pop-friendly dance acts.

Angel Haze, The Death Set, Bad Rabbits @ House of Vans
Rapper Angel Haze's debut album Dirty Gold is pretty good, but her live shows and freestyles are where it's at, so tonight should be a blast. Don't miss dancepunks The Death Set either.

Earlwolf (feat. Tyler, the Creator & Earl Sweatshirt), The Internet @ Irving Plaza
The Odd Future guys are still putting on memorable hip hop shows, and if you don't think their schtick is up yet, you should dig the craziness that is about to ensue.

Meyhem Lauren, Buckwild @ The Studio at Webster Hall
Meyehm Lauren & Buckwild just put out the killer Silk Pyramids LP which sounds straight out of the '90s and is hard as hell. It features some other local faves including Action Bronson, Heems and Troy Ave. Hopefully at least one of them shows up for this.

Summer Thunder w/ Pissed Jeans, Cold Fronts @ Union Pool
Summer Thunder is back at Union Pool for another sunny season of free outdoor daytime shows. This should be a wild one, as it's headlined by beer-flinging punks Pissed Jeans. The fun starts at 2 PM but don't expect bands to go on till later.

Concrete Mascara, Swallowing Bile, Aischrolatreia, Swollen Organs, Penchant, :M:, Vat, Nick Klein @ Trans-Pecos
Sonic masochists can get a fix of bloody eardrums with a night of noise and power electronics at Trans Pecos, with eight acts--six from NYC--and a DJ set going late into the night.