The Notwist at Webster Hall in 2008 (more by Tim Griffin) 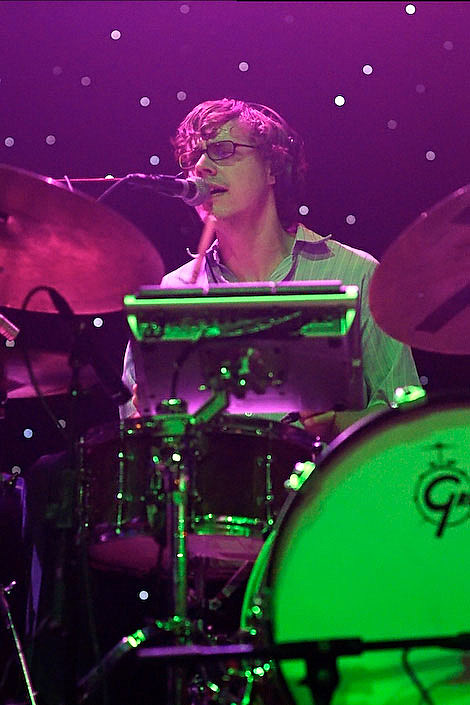 The Notwist, Jel (from Themselves/13 & God) @ Webster Hall
German band The Notwist released Closer to the Glass, their first album in five years, back in February which found them still melting glitchy electronics and krauty indie rock together with skill.

Turnip King, Kissing Is A Crime, Idiot Son, Bronko Lelich @ Baby's All Right
Baby's All Right hosts free shows on Mondays, and tonight's line-up is solid as an indie rock, with Sea Cliff, Long Island's Turnip King headlining. While we're on the subject of Baby's All Right, their delicious/deady Pink Baby frozen cocktails are only a buck during happy hour (5 - 8 PM) every day during June.

Peter Murphy, Ringo Deathstarr @ Irving Plaza
Peter Murphy just released his new album, Lion, which was produced by Youth of Killing Joke and, as the title might imply, is a little wilder than we've heard the former Bauhaus singer be in a while. Lion definitely roars. Tonight's show is opened by superior shoegaze trio Ringo Deathstarr who roar, too.

Life Size Maps, The Veda Rays, Council, How Sad, Aly Tadros @ Pianos
This show is part of the New Music Seminar (not that you noticed), featuring a nice array of local talent, including underappreciated synth-rock band Life Size Maps.

The Orwells @ Rough Trade
Chicago's The Orwells just released their second album, Disgraceland, and are celebrating that tonight. To get into the show you need to have bought the album at Rough Trade before the show. There's a TBA afterparty too.

Ed Askew, Abhay Singh @ Manhattan Inn (FREE)
Ed Askew is nothing short of a legend in folk music. His '60s material lives up today and lucky for us he is currently a very active musician. Any chance to see him is one worth taking.

Trickstar, Rivergazer, Benjamin Shepherd, Issac Gillespie & Ian Davis Duo @ Palisades
Rivergazer is the project of Kevin Farrant, who you may know as the guitarist in Porches, though this is a little poppier than that band. Show's at Palisades (906 Broadway in Brooklyn) and admission is $5 at the door. Stream a track below.

John Hodgman @ Union Hall
Erudite author, actor, Daily Show correspondent, comedian and general bon vivant John Hodgman hosts another of his Secret Society shows at Union Hall. Advance tickets are sold out, but there may be a few at the door if you get there early.