Ringo Deathstarr in Austin in 2012 (more by Tim Griffin) 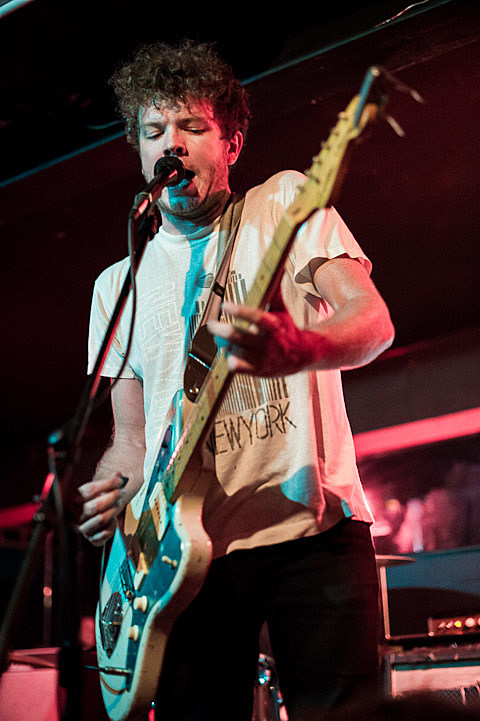 Ringo Deathstarr, Heaven, Harsh Vibes, Residual Kid @ Baby's All Right
A night off of their tour with Peter Murphy, noisy Austinites Ringo Deathstarr make time for a headlining show. These three do post-MBV shoegaze about as well as anyone, with a strong pop sense as well.

Honduras, Venetia Fair, Sharkmuffin, Desert Sharks @ Cake Shop
Honduras bring a lot of different influences to the table. A little garage, yes, but there's '80s/'90s British indie too. While it may not be anything you haven't exactly heard before, Honduras write very hooky songs and, as importantly, the bring a real energy to the performance.

Tyvek, Sleepies, Red Dawn II, Mr. Transylvania @ Death by Audio
Tightly wound Detroit noise unit Tyvek have been quiet of late -- something not usually associated with them -- as their most recently release was the Domestic Five cassette in 2013. Perhaps we'll find out what they've been up to

First Aid Kit @ Rough Trade
Swedish duo FIrst Aid Kit make more haunting folk pop on their new major label debut, Stay Gold, which comes out today. To get into this you have to be one of the first 300 people to purchase the album from the Rough Trade NYC store starting today at 11 AM.

Grim Reaper, Fantom Warrior, Iron Force @ Saint Vitus
Grim Reaper may have not gained the popularity of some of their other falsetto-streaked NWOBHM peers, but all three of their albums are rippers and they've deservedly earned some cult status. The band, led by vocalist Steve Grimmett (the solo original member) kick off a 2-night run at Brooklyn's Saint Vitus tonight. They're also promising a new album. Needless to say, these shows should get interesting.

Curtis Harding @ Mercury Lounge
Atlanta's Curtis Harding made a strong impression at SXSW where his "magnetism, pipes and chops were evident from note one." The guy's the real deal. Check out his debut album, Soul Power, which is out now on Burger. This is his first of two NYC shows.

Worlds Fair, Two-9, Cities Aviv, Aaron Cohen @ The Studio at Webster Hall
Queens rap crew World's Fair and Atlanta rap crew Two-9 are on tour together, and tonight they come to World's Fair's home city, for what should undoubtedly be a great double bill. Alt-rapper Cities Aviv and Golden Era worshipper Aaron Cohen (stream his album) are worth catching too.

And just a heads up, the NYC-area will be loaded with brown flip flops tonight, as Jack Johnson is playing Prospect Park and Dave Matthews will be at PNC Bank Arts Center.