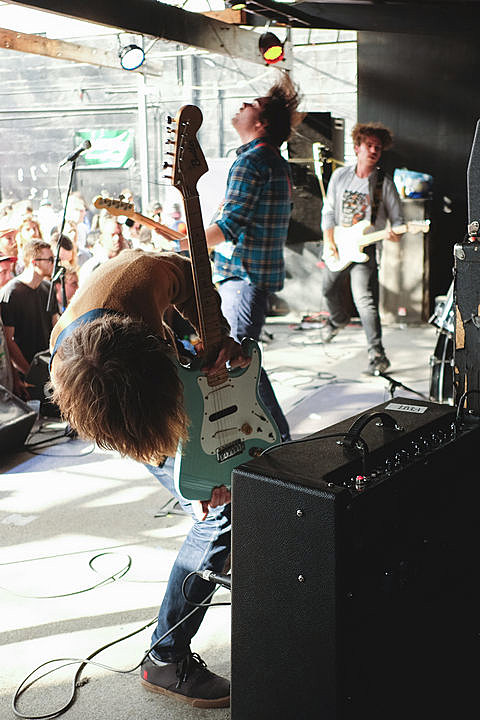 La Roux, Midnight Magic @ MHOW
Four years since her debut album, La Roux is finally back with a new record that, judging from the released tracks so far, is full of buoyant dance pop. "Uptight Downtown" could almost be a Bananarama song, making any cruel summer day a little cooler.

Grim Reaper @ Saint Vitus
Grim Reaper may have not gained the popularity of some of their other falsetto-streaked NWOBHM peers, but all three of their albums are rippers and they've deservedly earned some cult status. The band, led by vocalist Steve Grimmett (the solo original member), wrap up their 2-night run at Saint VItus tonight.

Curtis Harding, Darlings, Homeshake @ Glasslands
Atlanta's Curtis Harding made a strong impression at SXSW where his "magnetism, pipes and chops were evident from note one." The guy's the real deal. Check out his debut album, Soul Power, which is out now on Burger. This is his first of two NYC shows.

William Basinski, Cascade @ Issue Project Room
The great experimental composer William Basinski has been making excellent material for over a decade, having most recently released 2013's Nocturnes. Tonight's show is sold out.

HITS, Little Racer, The Fluids, Strange Pains @ Pianos
Brooklyn band Little Racer have been at it for a while now, making very catchy, UK-inspired guitar pop. Tonight's the second show of their June residency at Pianos.

Ben Watt @ Joe's Pub
The Everything But the Girl guitarist released Hendra, his first solo album in 30 years, earlier this year and plays his first-ever solo NYC tonight... with instrumental help from onetime Suede guitarist Bernard Butler. Sold out.

Talib Kweli (live w/ 9-piece band), Res, NIKO IS @ Brooklyn Bowl
NYC rap veteran Talib Kweli plays his hometown a lot but any chance to see him is a good one. Tonight and tomorrow's shows at Brooklyn Bowl are with a 9-piece band, so these should be especially interesting ones.

Ringo Starr & His All Starr Band @ Theatre at Westbury
Ringo Starr may not have the same epic stage show as the other surviving Beatle (he also hasn't written as many hits), but he'll still deliver plenty of the songs he sang lead for in that band. This is his first of a few NYC-area shows, including two at Beacon Theatre next week.

How to Dress Well @ The Slipper Room
How to Dress Well continues to progress from a hazy R&B artist to a real-deal songwriter, and his new album is shaping up to be a very good example of that. It's not out until June 24 but tonight's the release show so we'll likely hear a good amount of it here.

Sam Smith @ iHeartRadio Theatre
This free pre-release show will have the Disclosure collaborator playing material off his new album of mostly ballads, In The Lonely Hour. If you didn't get in through iHeartRadio's contest, you can still watch when it streams live on their site.