The War on Drugs @ Bowery Ballroom in March (more by PSquared) 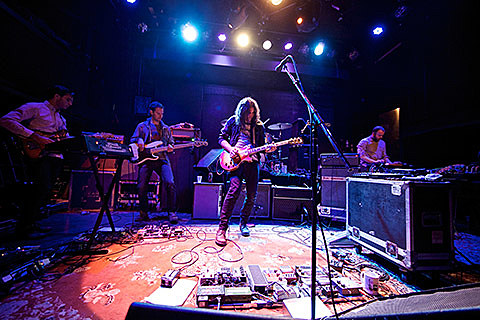 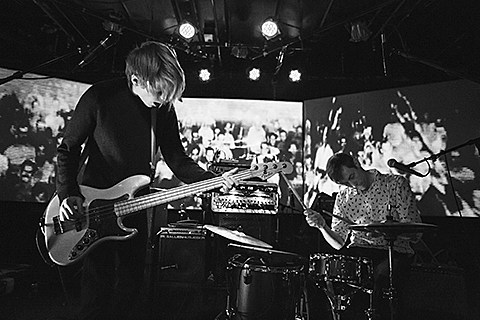 The Northside Festival
The Northside Festival's four-day takeover of North Brooklyn wraps up today with basically every venue in Williamsburg, Greenpoint and Bushwick involved. There are lots of shows, including a lot of free day shows, but we've highlighted our picks here -- noted by the "(Northside)" in the event name.

The War on Drugs, Woods, Juliana Barwick @ 50 Kent (Northside)
Postponed from the torrential downpours of Friday, The War on Drugs' spacious Petty-isms should go down well in this outdoor environment, as will Woods. Also: while some Northside shows might fill their badge quota quickly, that probably won't be a problem here given the size of the venue.

Pity Sex, Nothing, Teen Suicide, Crying @ Asbury Lanes
All of these bands have (or just had) NYC shows this month, but other than the Crying/Teen Suicide show at Shea on Thursday, this is your only chance in the area to catch them all together, so it might be worth the trip to Jersey.

Watain, Kosmodemonic, T.O.M.B. @ Brooklyn Night Bazaar (Northside Festival
Watain's black metal is the kind of thing that must be seen live, whether you're a fan or not. Opening is noise/black metal band T.O.M.B. and sludgy local band Kosmodemonic.

Thee Oh Sees, White Mystery, Mr. Elevator and the Brain Hotel, Hector's Pets @ Death by Audio
Death by Audio is probably the spiritual home for Thee Oh Sees in NYC, having played there on almost every tour. It's much different version of the band this time -- John Dwyer being the only constant -- but it will still be a madhouse. Sold out, natch.

Swearin', Radiator Hospital, Flesh Wounds, Bent Shapes @ Glasslands (Northside Festival)
Swearin' and Radiator Hospital (who share drummer Jeff Bolt) are both makers of excellent indie rock that throws a bit of pop punk and bedroom folk into the mix too. The Merge-signed Flesh Wounds make the kind of garage rock that any fans of Thee Oh Sees and Ty Segall will likely dig. And Boston's Bent Shapes make '90s-style indie pop which is a little harder around the edges than other bands in their realm.

CHVRCHES, The Range, Hunters @ McCarren Park (free)
CHVRCHES continue to get increasingly massive, so naturally RSVP for this free show filled up a long time ago.

Dinowalrus, Penicillin Baby, Johnny Aries, Comfy @ Muchmore's (Northside Festival)
This is a free afternoon show presented by Frenchkiss Records. Dinowalrus just released their quite good new LP (they play an official Record Release Party tonight at Mercury Lounge), and we're curious about Johnny Aries who plays guitar in The Drums but also had a band Two Wounded Birds who were good too.

Dan Croll, I Am Oak @ MHOW (Northside Festival)
UK singer-songwriter Dan Croll released his debut album, Sweet Dissaray, back in March which found him moving away from the Fleet Foxes-y folk of early singles into dancier territory.

Aretha Franklin @ Radio City Music Hall (Blue Note Jazz Festival)
The Queen of Soul returns to Radio City for what will surely be another excellent hits-filled show. Her second of two nights this week.

My Life With The Thrill Kill Kult @ Santos Party House
S&M industrial dance act MLWTTKK, who scored a minor hit in the '90s with "Sex on Wheels," always had over-the-top live shows your mom would disapprove of. We're curious what they're up to now (a new album, Spooky Tricks, came out in the spring).

Shilpa Ray, Starlight Girls, Juniper Rising, Spirit Plate, Everything Forever @ Shea Stadium (Northside Festival)
Shilpa Ray is Queen of Northside, having played a half dozen or so shows this week. Here's your last chance to catch her harmonium-fueled attack.

Friend Roulette, Sunflower Bean, ARMS, The Mystery Lights @ Spike Hill (Northside Festival)
Another free day show with a host of good local bands, including ARMS (Todd Goldstein who used to be in Harlem Shakes), the poppy Friend Roulette, and psych-pop newcomers Sunflower Bean who we've been meaning to catch. Maybe today's the day.

Mat Kerekes (of Citizen), Chris Kerekes, Somos @ The Studio at Webster Hall
We're most excited about Boston's Somos who open the show and deliver a killer mix of punk and indie rock. But if you're going, seeing Citizen singer Mat Kerekes and his brother Chris play shouldn't be too shabby either.

Fuck Buttons, Lichens, Odonis Odonis @ Warsaw (Northside Festival)
UK duo Fuck Buttons -- who are still noisy but have allowed some traditional pop structure on their new album -- will be debuting their new AV show on this tour, including this Northside show. Check out a video of their AV setup below. If you're going, do get there early to check out Toronto's Odonis Odonis who make superior goth/industrial rock.