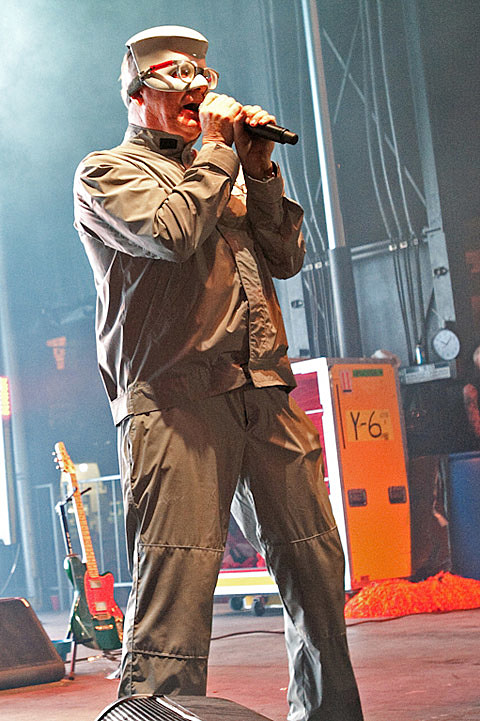 Devo @ Best Buy Theater
One of the most influential artists of the post-punk/new wave era (well beyond "Whip It"). Though we lost Bob Casale earlier this year, original members Gerald Casale, Mark Mothersbaugh, and Bob Mothersbaugh are still with them.

Young and Sick, Bent Denim @ Bowery Ballroom
Young and Sick have been getting some buzz this year for their take on the indie-R&B phenomenon (their style is probably closest to Rhye). Bent Denim, who have a bit of Youth Lagoon thing going on, open.

Thug Entrancer, Prism House, Octo Octa (DJ Set) @ Cameo Gallery
Thug Entrancer put out a record on Software earlier this year, and like a lot of thing son that label, it's minimal, ambient stuff. But he can get dancey too.

Maria Minerva, HIGHLIFE, Mind Dynamics @ Baby's All Right
Since moving to NYC, lo-fi pop singer Maria Minerva has become a regular on the scene, and is always worth catching, especially if you haven't done so yet.

STRFKR, Poolside, Chrome Sparks @ House of Vans
Speaking of dancepop, tonight's free House of Vans show is headlined by Portland's STRFKR make the kind of music some folks with MGMT still did.

Dead Kennedys, Reagan Youth @ Irving Plaza
Neither of these bands are currently with the lead singers that made them influential, but at least it's a good double bill to hear a ton of classic punk and hardcore in one night.

Asgeir, James Bay @ Mercury Lounge
Looking to stay cool in this heat? How about a trip to Iceland? Ok, how about an Icelandic band in an air-conditioned club? Asgeir have a similar vibe to Sigur Ros or Mew (in perhaps a slicker package).

Arkells, COIN @ Mercury Lounge
Canadian ban Arkells play the kind of heartland rock that was a radio staple in the '80s. They do it pretty well too.

The National, MS MR @ Prospect Park Bandshell
The National have a very impressive run of killer indie rock records, and despite their often-somber sounds, they're far from a boring live band. Final night of their three-night Celebrate Brooklyn! run.

Dead Stars, Sharkmuffin, Slothrust, Overlake @ Union Pool
If you like '90s style indie and alt-rock, you're probably going to be into this entire lineup, headlined by the crunchy Dead Stars. Really the whole night should be pretty good.

Hot Tuna, Leon Russell @ Capitol Theatre
Unlike the main members' other band, Jefferson Airplane, Hot Tuna have continued consistently for decades since their start as a band, and like fellow jam pioneers Phil Lesh or Allman Brothers, they've still got it.

Teen Suicide, Crying, Us & Us Only, Dungeon Kids @ Shea Stadium
Teen Suicide, the old band of Sam Ray (Julia Brown, Ricky Eat Acid) are back from the grave (sorry) and currently on a tour with the Run For Cover-signed chiptune band Crying.