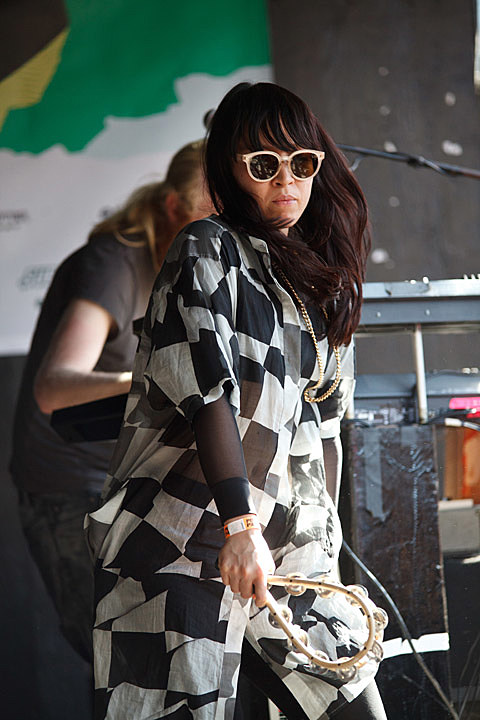 Jail Weddings, Earl Boykins @ Cake Shop
One of the biggest rock bands in Los Angeles (literally, there's nine of them), Jail Weddings make grandiose psych-rock in the tradition of Lee Hazlewood or Scott Walker. It will be interesting seeing them crammed into Cake Shop's tiny stage.

Ought, The Yum Dee Days, Savants, Tiger Dare @ Rough Trade
Canadian band Ought are surfing on a fair amount of buzz - and Talking Heads comparisons. See what the fuss is all about tonight.

All Eyes West, Broadcaster, Easy Creatures @ The Acheron
Chicago's All Eyes West are a newer band but love the '90s (they've played hometown shows with Knapsack and Braid, and were produced by Jawbox's J Robbins). They were in town last night for a show with Pilot to Gunner, and tonight they headline their own show at the Acherno.

Kaiser Chiefs, Streets of Laredo @ Webster Hall
Ten years since "I Predict a Riot" and "Oh My God" catapulted them the stardom, the Kaiser Chiefs soldier on.

John Doe @ The Bell House
The frontman for X does a solo show tonight at The Bell House, supporting his new best-of collection. He'll be back with X in August.

Hot Tuna, Leon Russell, Jorma Kaukonen @ Westbury
Unlike the main members' other band, Jefferson Airplane, Hot Tuna have continued consistently for decades since their start as a band, and like fellow jam pioneers Phil Lesh or Allman Brothers, they've still got it.

Biblical, VBA @ Mercury Lounge
Toronto's Biblical make throwback psychedelic rock and proto-metal, and though there's no lack of this kinda thing, they're one of the bands doing it exceptionally well.

Ivy, Tapehead, Chest Pain, Krallion @ Lulu's
NYC's Ivy make driving, attitude-filled punk as you can hear on their recent single for Katorga works, "Arch-Foe," which is streaming below. They're joined tonight by Rochester's Tapehead, Austin's Chest Pain and NYC's Krallion.