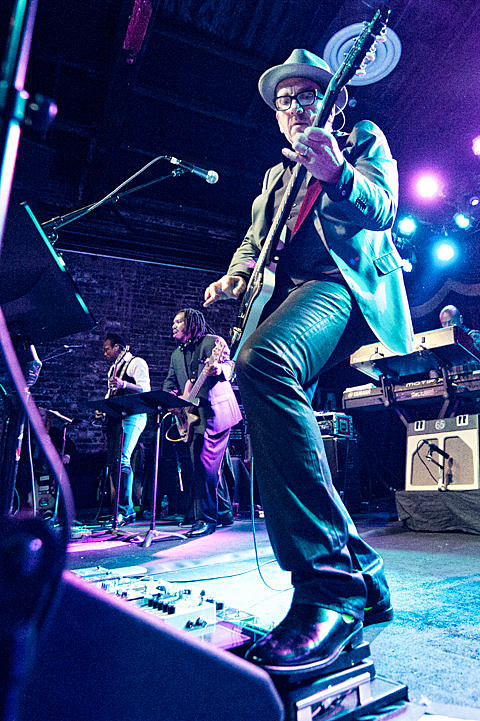 Stagnant Pools, Waltz, Phone Home @ Baby's All Right (FREE)
Stagnant Pools make a good mix of noisy post-punk, shoegaze and Strokes-y indie rock. They're currently on a tour opening for CYHSY which hits MHOW on Saturday, but first you can see them at this free show tonight.

Ethel, Kaki King @ Brookfield Place Winter Garden (FREE)
As part of the free River to River Festival, guitar great Kaki King teams up with string quartet Ethel for what should be an excellent collaboration of the indie/classical variety.

Elvis Costello @ Carnegie Hall
Elvis Costello is an amazing performer in whatever permutation/line-up he chooses to play, but perhaps none more than with just an acoustic guitar, where onstage stories are perhaps as entertaining as his amazing canon of songs.

John Doe @ City Winery (Hudson Square Music & Wine Festival)
The frontman for X does a solo show tonight, supporting his new best-of collection. He'll be back with X in August.

Tegan & Sara, My Midnight Heart, The Courtneys @ Hammerstein Ballroom
Tegan & Sara's new megapop sound may not hit as us hard on record as their earlier material, but it's super fun to see live. Vancouver trio The Courtneys, who make Flying Nun-style indie pop, are not to miss either.

July Talk @ Knitting Factory (FREE)
Toronto's dual-vocal indie rock band July Talk is somewhere between Man Man and Stars, and they do it well if you're looking for a newer band to take you back to the mid-2000s. Free too.

Mother Falcon, The Family Crest @ Littlefield
Speaking of bands that take us back to the mid-2000s, Austin's many-membered Mother Falcon make the kind of orchestral indie pop that recalls bands like Broken Social Scene, Arcade Fire and Beirut.

Primus @ Capitol Theatre
Get your bass face ready because four-string wizard Les Claypool and the rest of the Primus crew are back in town for two area shows, this being the first.