White Lung in Austin in 2013 (more by Tim Griffin) 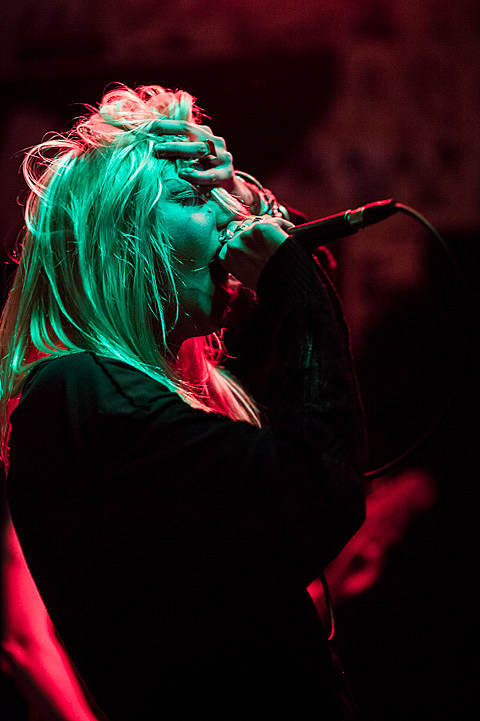 White Lung, Pop. 1280, Uniform @ Saint Vitus
White Lung's new record is more of the punishing aggression, inventive guitar playing, and powerhouse hooks and screams of 2012's Sorry, and yet another winner from one of the best punk bands around. Those songs will come to life tonight at Saint Vitus, their first of two NYC shows this week. Opening are local goths Pop. 1280 and noise duo Uniform, making for a good bill all around.

White Magic, Weyes Blood @ Union Pool
So you like bands with "White" in the name but prefer folk to punk? White Magic (aka Brooklyn's Mira Billotte) casts her spell tonight with the equally bewitching Weyes Blood as opener.

Nothing Changes w/ Merchandise @ Home Sweet Home
After two Brooklyn shows, Florida's Merchandise return to Home Sweet Home where their gothy guitar pop will be right at home. This show is late and don't be surprised if this ends up being an unofficial afterparty for the White Lung show.

Garlands, John Errol @ Baby's All Right
This is not the Swedish band The Garlands who recently played NYC Popfest but a local band Garlands (not "the") who also make really good indiepop. Stream two tracks below.

Elvis Costello @ Carnegie Hall
Elvis Costello is an amazing performer in whatever permutation/lineup he chooses to play, but maybe none more than with just an acoustic guitar, where onstage stories are perhaps as entertaining as his impressive canon of songs.

Schoolboy Q, Domo Genesis, Tinashe, BlackoutBoyz (A$AP Yams & A$AP Jscott) @ Central Park Summerstage
Of all the Black Hippy rappers, Schoolboy Q is the biggest party animal so needless to say, his shows are always a great time. And with three quality albums now, he's got plenty to pull from tonight.

Lionel Richie, Cee Lo Green @ Jones Beach
From his funky days in The Commodores through his '80s sweater-wearing days, Lionel Richie is truly a talent. Some may want this show with Cee Lo Green to go all night long.

Wreckless Eric, Dion Nania @ Mercury Lounge
One of the original artists signed to punk-era UK indie label Stiff, Wreckless Eric is best known for his hit "Whole Wide World," but there's a lot more to him than that. Go get acquainted tonight.

Evian Christ, Dutch E Germ, UNiiQU3, Gatekeeper, Will Fry @ Output
Evian Christ first deservedly earned some buzz for his wacked-out dark hip hop beats, but his profile seriously rose when Kanye included him on Yeezus. He's since begun putting out new stuff, and it's pretty noticeable from those tracks that he's been in a room with Kanye West.

Little Racer, Cosmonaut, Weekender, The Balconies @ Pianos
Brooklyn band Little Racer have been at it for a while now, making very catchy, UK-inspired guitar pop. Tonight's the final show of their June residency at Pianos.