Warpaint in Austin in April (more by Tim Griffin) 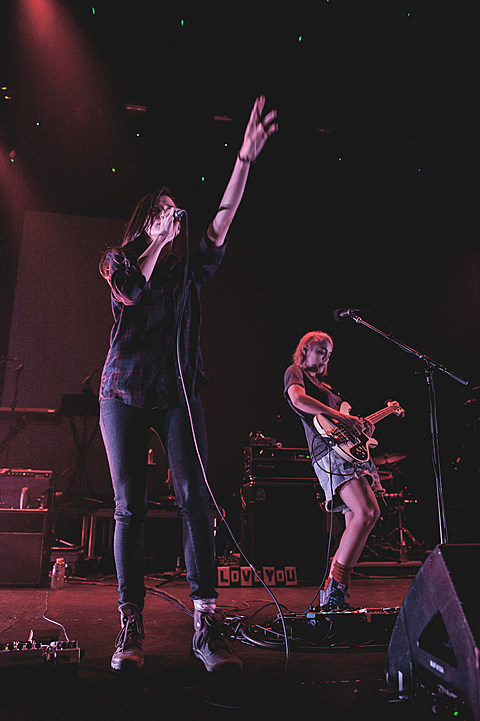 Warpaint, Yellowbirds @ Prospect Park Bandshell (FREE)
Warpaint's second album is a slow burn, more about vibe than obvious singles, but the record has many sultry charms. There are even more charms -- and serious chops -- with their live show. A free evening with Warpaint in the park sounds like a nice Thursday.

White Lung, Pop. 1280 @ Mercury Lounge
White Lung's new record is more of the punishing aggression, inventive guitar playing, and powerhouse hooks and screams of 2012's Sorry, and yet another winner from one of the best punk bands around. Those songs will come to life tonight at Mercury Lounge, their second of two NYC shows this week. Opening are local goths Pop. 1280, making for a good double bill.

Strand of Oaks, Lewis & Clarke @ Mercury Lounge
After the White Lung show, Merc hosts another great one with Strand of Oaks. His previous output was on the bare bones folk side, but this new record, HEAL (out this week), is a heavily arranged, full band folk rock affair. He'll have the band with him tonight too.

Iron and Wine, The Secret Sisters @ The Space at Westbury
Iron & Wine continued to shift from the bare bones bedroom folk songwriter he started out as to a band with a bigger, more layered sound on 2013's Ghost on Ghost. Tonight you can see those fuller sounds come to life, and hopefully we'll get to see Sam in solo format for a bit too.

The Juan Maclean (DJ set), Tim Sweeney @ Verboten
It's been five years since Juan and Nancy Whang put out a record as The Juan Maclean, but the duo are back in action for real with In A Dream out in September. Maybe they'll drop one of their new tracks tonight. Onetime DFA associate Tim Sweeney opens.

Oddisee (w/ live band Good Company), Louis Logic, E.M.S @ Glasslands
Oddisee makes indie rap that is not only more underground than say, Wiz Khalifa, but also pulls from indie music, with its re-workings of Bon Iver, Metronomy, and others.

Marvin Berry and The New Sound, Gloomy Ones, Nato Coles, The Blue Diamond Band @ The Acheron
Marvin Berry and The New Sound, besides having an excellent Back to the Future reference in their name, are one of Don Giovanni's newest signees and makers of quality garage rock.
The Budos Band, Spires @ Bowery Ballroom
If you like vintage grooves, the Daptone stable's Budos Band lay down seriously funky instrumentals. Spires are groovy in their own way, as well. Can you dig it?