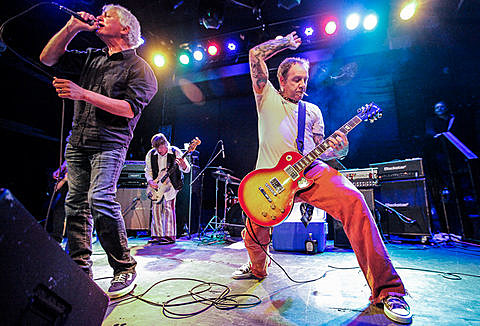 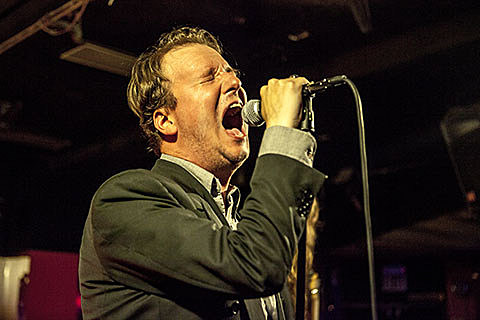 Guided By Voices, Crystal Stilts @ Irving Plaza
The ever-prolific Guided by Voices will play surely another marathon set tonight, boozy and riff-filled. Don't miss openers Crystal Stilts who are one of Brooklyn's better, if underrated at this point, bands.

Protomartyr, Alvvays @ South Street Seaport
The Seaport Music Fest, back with a robust eight-weeks and now on Fulton Street, kicks off its run tonight with Detroit's post-punky Protomartyr and Canadian indiepop band Alvvays. Bands start at 7 PM, not to be missed!

DIIV, LODRO, Regal Degal @ Music Hall of Williamsburg
DIIV are working out new material on the road, so expect a lot from their forthcoming second albuml tonight. Both LODRO and Regal Degal are worth catching too.

Crosby, Stills and Nash @ Beacon Theater
One of the most distinctive harmony styles in rock music, David Crosby, Stephen Stills and Graham Nash's music has endured for over 40 years. This is the third of three nights at the Beacon.

Juana Molina @ The Greene Space
Juana Molina released her highly-acclaimed Spanish-language folktronica album, Wed 21, last year and continues to support it. This is her first of two NYC shows of the week.

The Mentors, Mutilation Rites, Hexer, Maximum Oversatan, Bomb Scare, Trez Muertoz, Throaat, Goat Felch, Evil Army, Vermefug, Weird and pissed Off, Eat the Turnbuckle, DUTCHGUTS, Slaughter the Prophets, Mad Diesel, Esclavos @ The Paper Box
During The Mentors' initial run from 1977 to 1997 they made all kinds of offensive, heavy music. Though lead singer/drummer El Duce died in 1997, they regrouped without him in 2001 and continue on. Some good support names on that bill too like Mutilation Rites, Throaat and more.

Titus Andronicus, Beach Slang, Slothrust, Lost Boy? @ Brooklyn Night Bazaar
Titus Andronicus have been previewing a ton of new material at their shows lately, so it'd be pretty hard to getting an early taste of that new stuff for free tonight. Philly's Beach Slang (ex-Weston) are also more than worth showing up for. Their mix of Replacements/Goo Goo Dolls anthems with Jawbreaker gruffness and nostalgia-filled lyrics is a real winner.

Beyonce, Jay-Z @ Metlife Stadium
Beyonce and Jay Z may be at very different places in their careers -- Bey just put out her best album while Jay's best material is likely behind him -- but needless to say they've both got tons of A+ tracks (and many to collaborate on). This show will be quite the spectacle. Night 1 of 2. 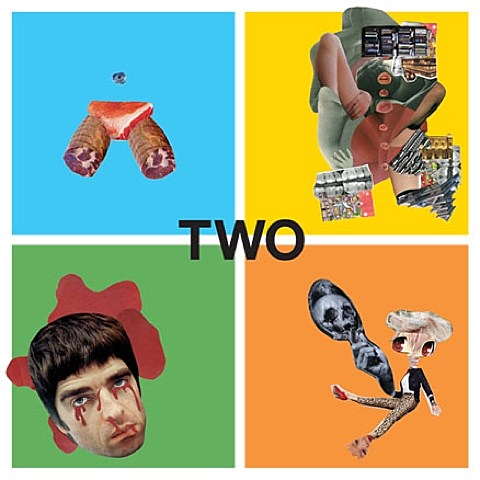 Owls, Hop Along, Glocca Morra @ Bowery Ballroom
Though American Football is the Kinsella reunion everyone is buzzing about this year, let's not forget that Owls (aka Cap'n Jazz minus The Promise Ring's Davey von Bohlen) are also back with the long-awaited followup to their excellent 2001 debut, and it's a good one. Good support tonight too, including Philly indie rock favorites Hop Along and Glocca Morra, who likely own a Kinsella record or two.

Prawn, Caravela @ Knitting Factory (free, midnight)
One place you might want to head after the Owls show is Knitting Factory where there will be a free midnight show headlined by Prawn, another band who surely owns a couple Kinsella records.

Dave and Phil Alvin with The Guilty Ones, Jonah Tolchin @ The Bell House
Dave and Phil Alvin are/were both members of veteran roots rock band The Blasters whose debut LP came out in 1980, and the pair just put out a new album together on Yep Roc this year. Their labelmate Jonah Tolchin also put one out on that label this year, which features a guest spot from Deer Tick's John McCauley.

Half Waif, Cantina, Natureboy @ Cameo Gallery
Both Half Waif and Natureboy make this a solid bill for local art pop.