Future Punx at Glasslands in March (more by Amanda Hatfield) 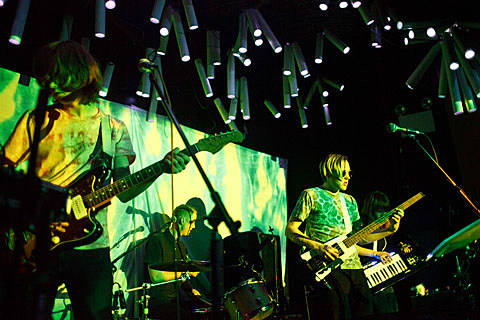 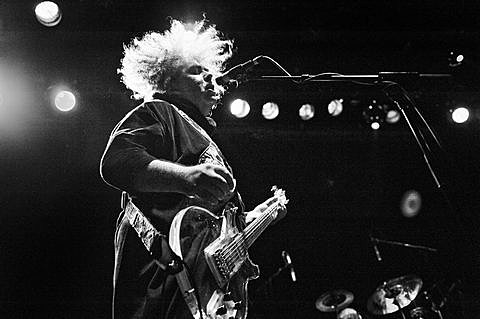 Future Punx, Eaters, Final Bloom, Royal Garde @ Rockaway Beach Surf Club (BV/Dull Tools presents)
Its a day of sun, sand, and post-punk with this beach party we're throwing with the good folks at Dull Tools, featuring their roster's Future Punx and Eaters, plus likeminded Final Bloom and Royal Garde. The fun starts at 3 PM and, yes, you can see the World Cup final there too. FREE. (Rain or shine.) Hope to see you there. UPDATE: The show will be moved to the surf club's indoor space, and bands start immediately after the World Cup game ends (around 4:30).

Bonobo, Cibo Matto, Odesza @ Central Park Summerstage
On record, UK producer Bonobo makes delicate downtempo but he's been known to flesh it out with instrumentation and vocals live. Cibo Matto, who are very much back in action now, make this a great double bill.

King Buzzo, Mary Halvorson @ Santos Party House
With the Melvins, Buzz Osborne has made some of the dirtiest sludge there is, but he's gone soft on us and put out on acoustic record. Of course, even King Buzzo acoustic still rocks pretty hard.

Ash Borer, Hell, Vilkacis, Mongrel @ Acheron
Ash Borer and their doomy tourmates Hell play this all-ages matinee show that was originally supposed to happen at 538 Johnson but is now at Acheron.

Gary Clark Jr. @ The Surf Lodge
It's always nice to spend a weekend away from NYC in the Hamptons, and if you're doing that this weekend, you won't wanna miss this free show from blues shredder Gary Clark Jr.

Emma Ruth Rundle, Stephen Brodsky, Jason Bartell @ Saint Vitus
Emma Ruth Rundle has been in various bands over the years, but this year she went solo and put out an excellent album of melancholic folk that any fans of her labelmate Chelsea Wolfe should dig. Good bill all around too with Cave In's Stephen Brodksy and Fang Island's Jason Bartell.

The Burlies @ Mercury Lounge
Though The Dismemberment Plan are back in action, singer Travis Morrison also stays busy with other projects, including indie rock band The Burlies.

Johnny Thunders Birthday Bash @ Bowery Electric
A bunch of the old punks are coming together to celebrate the late, great Johnny Thunders' birthday including Walter Lure of Thunders' band The Heartbreakers, Ivan Julian of Richard Hell & the Voidoids, and more.

Alpenglow, Caroline Rose, Lapland @ Baby's All Right
Alpenglow, who recently moved from Burlington to Brooklyn, make a great mix of psychedelic-leaning indie folk and dream pop. They have a new EP on the way and will likely show us some of that tonight.