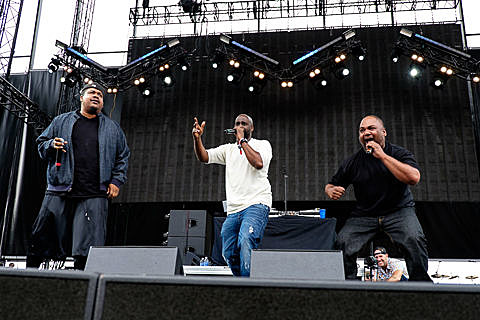 Fight Amp at BV Northside in 2012 (more by Markus Shaffer) 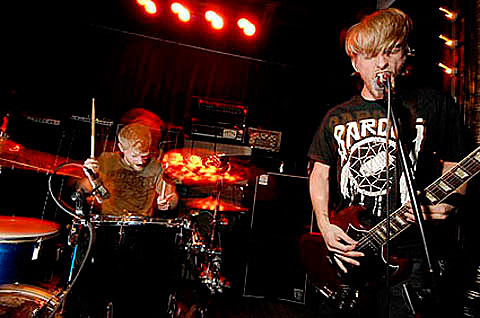 De La Soul, Dillon Cooper @ Irving Plaza
Legendary hip hop trio De La Soul are celebrating their 25th anniversary this year, which so far has included giving away their entire catalog for free download and putting out a new mixtape with J Dilla beats. (Not to mention they performed with Damon Albarn.) Tonight the celebration continues at Irving Plaza.

Sharon Jones & The Dap-Kings, Lake Street Dive, No BS! Brass Band @ Brookfield Place Plaza
It's night one of the two-day Lowdown Hudson Blues Fest. Free tickets for seating will be distributed two-per-person, starting at 3 PM on the Waterfront Plaza at Brookfield Place.

Primitive Weapons, Fight Amp, Kowloon Walled City, Roomrunner @ Saint Vitus
This is a pretty diverse bill but the bands do have one thing in common -- they all rock hard. Local representation comes from metal band Primitive Weapons, and they're joined by the AmRep-style noise rock of Fight Amp, the sludgy post-hardcore of Kowloon Walled City, and the catchy grungy Roomrunner.

Flume, Sweater Beats, Nadus @ Terminal 5
Australian producer Flume saw a HUGE bump in his career recently, partially thanks to a Lorde remix. Tonight's his first of three sold out Terminal 5 shows this week.

Queens of the Stone Age, Brody Dalle @ Capitol Theatre
QOTSA made a great comeback on last year's ...Like Clockwork, and they're continuing to support it. Tonight's show is with former Distillers singer (and Josh Homme's wife) Brody Dalle, who recently put out her first solo album.

Basement Jaxx (DJ Set) @ Verboten
Long-running UK dance duo Basement Jaxx will be back with Junto, their first album in five years, next month. Get a taste at this DJ gig tonight.

Warehouse, Laced, Bueno @ Baby's All Right
Warehouse make rackety post-punk that's a little reminiscent of Mannequin Men, as you can hear on their just-released debut LP. Tonight's their first of two NYC shows this week and it also includes Beach Fossils/Nude Beach side project Laced and local indie rockers Bueno.

The Early November, Empire! Empire! (I Was A Lonely Estate), The Color and Sound @ The Studio at Webster Hall
Of the early '00s Drive-Thru scene, few bands lived up as well as The Early November, as we were reminded when they played their 2003 debut in full last year for its 10th anniversary. Tonight they're in acoustic mode, and husband/wife duo Empire! Empire! (who will soon release their first LP since 2009) make this a solid double bill.