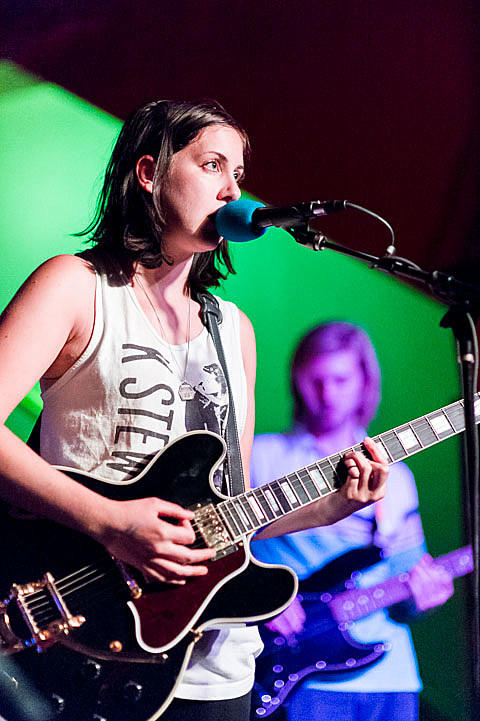 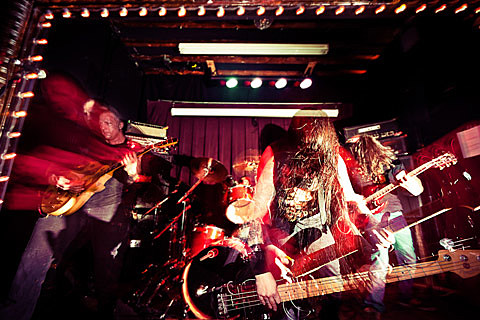 Celebration, Dragons of Zynth, Honey @ Baby's All Right
If the advent of Katrina Ford's new band Mt Royal put any question to whether her old band Celebration were still going...they are. In fact, Celebration have signed to Bella Union who will release their new album, Albumin, next month. Get an early listen in live form tonight.

Midnight Magic, King Holiday, Keith Sweaty @ Cameo Gallery
If you like your dance music played by a skilled live band, you're in luck as two bands on this bill fall under that category. Midnight Magic are straight-up disco

The Numerators, Scully, Fire Retarded, Sharkmuffin @ Death By Audio
Punks the Numerators don't play as ofter as they used to, and tonight's show is their only NYC show for 2014. Caroline Partamian, pulls double-duty tonight, also playing in Scully which is a revamp of her old band The Splinters.

Veruca Salt, Battleme @ MHOW
Veruca Salt, now back with their original lineup, play their second NYC shows in many many years this week. (Bowery Ballroom was last night and their first.)  You'll likely hear a bunch of new tracks from their forthcoming new album, but there's no way they're not gonna hit with "Seether" and "Number One Blind." Sold out.

Honduras, ONWE, Journalism, Turnip King, Lazyeyes @ Palisades
Honduras bring a lot of different influences to the table. A little garage, yes, but there's '80s/'90s British indie too. While it may not be anything you haven't exactly heard before, Honnduras write very hooky songs and, as importantly, the bring a real energy to the performance.

The Everymen, Everest Cale, Rocket and the Ghost, We Roll Like Madmen, Caldor Kids, Secret Weapons @ Pianos
New Jersey's The Everymen returned this April with Givin' Up On Free Jazz, back with another dose of boozy heartland swagger that comes off even better live.

Tombs, Pyrrhon, Statiqbloom, Passage Between @ Saint Vitus
Tombs continue to perfect their sludge metal formula on this year's killer Savage Gold, and tonight's the release show for that. Good openers too, so get there on time.

Fell Voices, Yellow Eyes, Mongrel @ The Acheron
Some competition in the metal world tonight: Fell Voices make some of the best atmospheric black metal in the Pacific Northwest, and tonight they play their only show of 2014, here in NYC. It's a good bill all around here too.

Lucero, J Roddy Walston and the Business @ Capitol Theatre
Country punks Lucero know how to have a rowdy, whiskey-fueled good time, but they also know how to pull your heartstrings with sad (and also whiskey-fueled) down-on-their-luck songs. They don't hit NYC on their current tour, but they play two nearby shows, this being the second.

Rustie, Ac Slater, Alex English, rekLES @ Webster Hall
Rustie often makes maximalist in-your-face electronic music, but he has a real sense of melody that many others who do a similar thing are lacking. He's got a new album on the way (that he just posted a song with Danny Brown from), so hopefully he'll drop a track or two from that tonight.

Melted Toys, Tonstartssbandht, Free Time, Street Gnar @ Cake Shop
San Francisco's Melted Toys just released their second album, which came out a couple weeks ago. Like their debut, the album falls somewhere between psych and indiepop, easy-to-swallow and effervescent, with occasional halucinatory side effects. They play tonight with their Underwater Peoples labelmates Free Time, as well as Montreal/Brooklyn noisemakers Tonstartssbandht.

Ten Foot Pole, Burning Streets, Sad and French @ Grand Victory
Ten Foot Pole have been making melodic punk -- not far removed from NOFX -- since the early '90s (and hardcore under the name Scared Straight before that), and next year they'll release their first album since 2004. No music's come out from that yet, but maybe we'll get to hear some at this show.

The Split Squad, Ivan Julian, New York Junk @ The Bowery Electric
The Split Squad formed around singer/bassist Michael Giblin, who is a session musician and producer and has fronted bands like The Parallax Project and Cherry Twister. If that name is unfamiliar, you might know some of the rest of the band: Clem Burke (Blondie), Keith Streng (The Fleshtones), Eddie Munoz (The Plimsouls), and Josh Kantor (The Baseball Project). If you like Beatlesque power-pop, this might be the ticket tonight.

Black Rainbow, Cousin Brian, Slow Animal, Vulture Shit @ Shea Stadium
San Francisco DIY punks Black Rainbow's members came up in the same scene that the members of Shellshag were part of before they moved here, and like that band, Black Rainbow still sound great and relevant today. This is their first of two NYC shows of the weekend.

Destination Moon Art & Music Fest with People's Champs, Three-o Huxtable, Underground River, Jack and Eliza @ Littlefield
Unlike a lot of bands that call NYC/Brooklyn home, duo Jack and Eliza actually grew up here and have been friends since childhood. Now musical partners, Jack and Eliza make winsome pop, at this point just letting their guitars and voices convey their charms. If you liked the early, stripped-down days of Slow Club with a little Beach Boys/Everly Brothers influence, they're pretty appealing. They play tonight as part of this evening of music and art dubbed "Destination Moon."