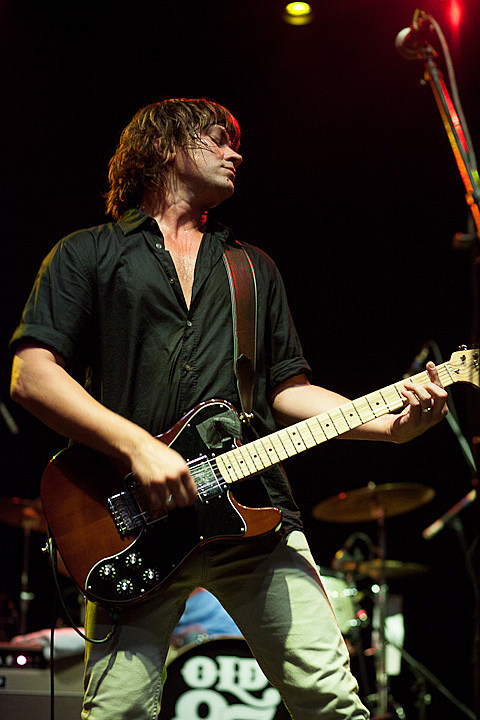 Old 97's, Madison King @ Brooklyn Bowl
Alt-country veterans Old 97's put out their ninth album, Most Messed Up, this year and are spending plenty of time on the road in support of it. Tonight's their first of three NYC shows this week. They hit Brooklyn Bowl again tomorrow, followed by a free Lincoln Center Out of Doors show on Saturday, which is part of Americanafest.

Emmylou Harris & Rodney Crowell, Robert Ellis @ Damrosch Bandshell
Americanafest kicks off today though, and its first show is with an even more-veteran country artist, Emmylou Harris, who has been at it since the late '60s and is still plenty active, last releasing Hard Bargain in 2011 on Nonesuch. Newer-comer Robert Ellis opens.

Ex-Breathers, Sneeze, Deism, Vulture Shit @ Death By Audio
Things will get loud at DbA tonight with hardcore from Florida's Ex-Breathers and Alabama's Deism, '90s alt-rock love from Massachusetts' Sneeze, and guitar-less punks Vulture Shit hold down the local representation on the bill.

Omar Souleyman, Dutch E Germ, Michael Beharie @ Glasslands
Syrian pop singer Omar Souleyman has an exotic live show that you just have to see to believe, and is always sure to be a party. Former Gang Gang Dance member Dutch E Germ opens and is worth catching too. This show was rescheduled from June and is sold out.

Presidents of the United States of America, In the Whale @ Irving Plaza
The Presidents of the United States of America were well known in the '90s for quirky alt-rock hits like "Lump," "Peaches" and their cover of "Video Killed the Radio Star," but despite saying they'd be done making music in 2008, they returned this year with a new album. Some of it isn't too far removed from their more classic material and should sound great next to the old favorites tonight.

Caged Animals, Howth, Bueno, Parlor Walls @ Palisades
Caged Animals are back after a half-year hibernation and are clearly ready to start playing again, as this is their second show in as many nights. Expect new songs and positive vibes tonight.

FKA twigs, P. Morris @ Webster Hall
FKA twigs built quite the buzz off a couple EPs last year that recalled late '90s trip-hop but sounded modern too. Next week we'll find out how the promise of those EPs resulted in her first full length album, but ahead of that she'll play a big sold out show at Webster Hall tonight.

KISS, Def Leppard, the Dead Daisies @ Nikon at Jones Beach Theater
Rock and roll all night and get sugar poured on you (metaphorically) at Jones Beach tonight with two of hard rock's biggest bands ever.

Charanjit Singh, Heems, The Kominas @ Baby's All Right
Billed as "Ten Ragas to a Rap Beat," Indian electronic music pioneer Singh and former Das Racist MC, Heems, will each do individual sets but promise a little collaboration too.

Whatever Dad, Baby Mollusk (and the Big Babies), Told Slant, Mitski @ Silent Barn
When Elaiza Santos isn't fronting the Run for Cover-signed chiptune band Crying, she makes her own music as Whatever, Dad which is more in the lo-fi bedroom folk realm. The rest of this bill is pretty much in that realm too, including Baby Mollusk (whose singer also fronts another, very different band: the hardcore band Nine of Swords), Told Slant (who we just caught with The Hotelier and Foxing), and Double Double Whammy-signed singer/songwriter Mitski.

Sole, DJ Pain 1, Pictureplane, Ceschi @ Glasslands
Sole has been at it for years with many releases on the Anticon label, making the kind of alternative hip hop that label is well known for. This year he put out Death Drive, a collaborative album with DJ Pain 1, and tonight the pair will team up at Glasslands. Pictureplane's dance music should be a nice primer to their set.

Nellie McKay @ 54 Below
Charming singer-songwriter is at this supper club all week, debuting her new show, "A GIRL NAMED BILL: The Life and Times of Billy Tipton."