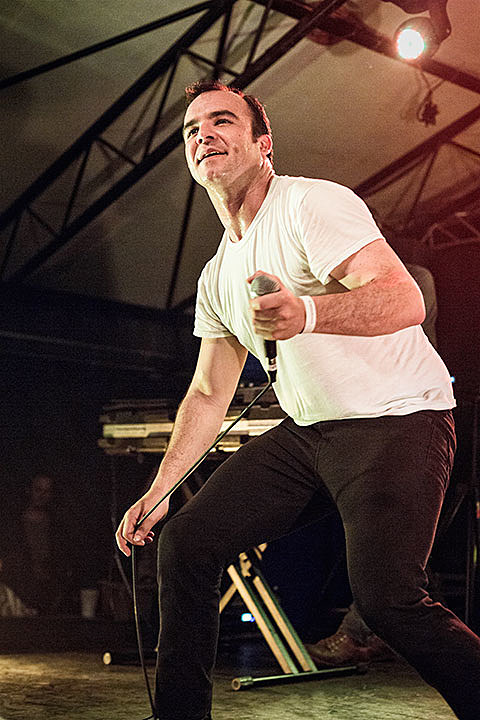 Future Islands, Operators, Omar Souleyman, Mas Ysa @ House of Vans
Together now for nearly a decade, Baltimore's Future Islands hit the big time this year with their 4AD debut, Singles, a meme-able Letterman appearance, and still-going single "Seasons (Waiting On You)." Tonight's free show (with free beer) at House of Vans should be mayhem. Get there early for Dan Boeckner's new band Operators, Syrian artist Omar Souleyman. Also show up early so you can get in. If you already RSVP'd, that is.

PULP: A Film About Life, Death & Supermarkets @ Rooftop Films
Speaking of Britpop, tonight's the screening of Florian Habich's terrifically entertaining documentary about Sheffield's suave Pulp. Stick around after this sold-out screening as frontman Jarvis Cocker will participate in a Q&A as well as judge a Pulp karoake contest.

Tashaki Miyaki @ MoMA
LA band Takashi Miyaki make sleepy psych a la the many bands of David Roback (Mazzy Star, Rain Parade). This is the trio's first of three NYC shows and is part of the MoMA Nights series in the museum's sculpture garden. Free with museum entry (aka not free, but you do get to see all the amazing art too).

Old 97's @ Brooklyn Bowl
Celebrating 20 years as a band this year, alt-country vets Old 97's showed they still have some shit to kick with their feisty new album, Most Messed Up. This is their second night at Brooklyn Bowl and they'll play Lincoln Center Out of Doors on Saturday.

178 Improvisation Product, Borts Minorts, A Bunch of Dead People, Big Figment @ Cake Shop
Is Borts Minorts performance art or a rock band? Can't it be both? Funny, 100% strange and unlike anything you've ever seen. Even if you've seen him before. Headliners the Improvisation Project features members of Liquid Liquid and Le Savy Fav.

Mykki Blanco @ East River Amphitheater
Rapper Mykki Blanco never fails to put on a memorable show and tonight he'll do so for free as part of the ongoing Summerstage series.

Dead Stars, Honduras, American Darlings @ Mercury Lounge
Do you remember '90s indie rock? Dead Stars do and make their own version, full of big hooks and catchy riffs probably played on Fender Jaguars. Their new album Slumber is worth checking out.

Free Time, Spectre Folk, Words with Frank Linetti @ Baby's All Right
Australian expats Free Time make like a noiser Real Estate for folks whose water spins down the drain in the other direction. They've got a new single out on Underwater Peoples which you can probably pick up at the merch table.

Whores, American Sharks, No Way @ Saint Vitus
It's a good double bill of bands who sorta border on metal with the noise rock of Whores and the riffy stoner rock of American Sharks.

Modest Mouse, Mimicking Birds @ Starland Ballroom
Modest Mouse haven't put out new music in forever (though they keep promising it and do play some of it live), but their live shows have been stacked with classics lately and are still a great time. Tonight's their third of three shows just outside of NYC, leading up to their big co-headlining Queens show with Brand New on Saturday.

New Myths, Loose Buttons, Kate Faust, The Exiles @ Pianos
Brooklyn synthpop trio New Myths will release their debut album this fall. Before that happens, they're doing an August residency at Pianos, this being the first Thursday of the bunch.