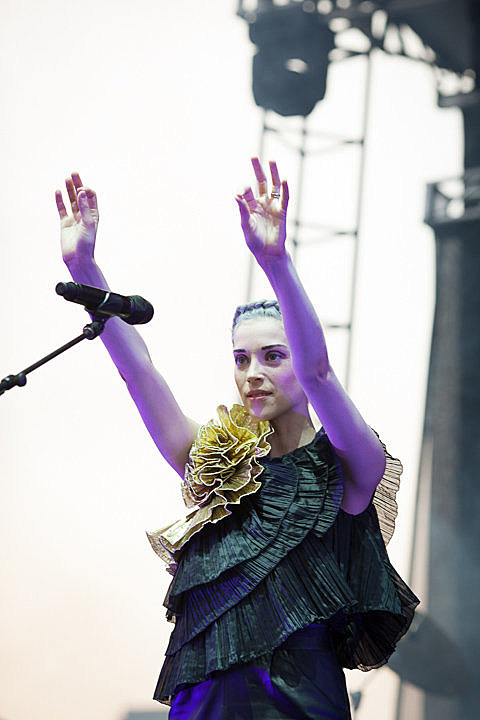 St. Vincent, San Fermin @ Prosepct Park Bandshell
St. Vincent's art pop is at its most accessible on this year's self-titled LP, but without sacrificing any of what makes her a unique musical force. Fans of her baroque influences (and Sufjan's) may dig opener San Fermin too. Like many Celebrate Brooklyn shows, this one is totally free.

Modest Mouse, Brand New @ Forest Hills Stadium
Neither Modest Mouse nor Brand New have released new music in five years, but their diverse discographies only sound better as time goes on. This is one of a few co-headinling dates the two bands are playing together this year, and one of a few shows happening this summer at Queens' recently-reopened Forest Hills Tennis Stadium. Should be a special night all around.

The Rock *A* Teens, Bird of Youth @ Glasslands
'90s era indie rock band The Rock*A*Teens formed in 1994 in Georgia. While they took from rockabilly (love of reverb, crazed playing), they added elements of music hall and powerpop, creating a boozy sound all their own. Having been broken up for a while, the band reformed for Merge 25 and are playing a few more shows while back in action, like tonight's

Shockwave Riderz, Places To Hide, G. Green, Black Pony @ Baby's All Right
It's the second of two NYC shows for Pittsburgh motorik garage rockers Shockwave Riderz (ex-Modey Lemon) this week, and the bill's made doubly great by Atlanta indie rockers Places to Hide who just inked a deal with Tiny Engines and put out a promising new single.

Drowningman, Pilot to Gunner, As We Were @ Saint Vitus
Fans of late '90s - mid '00s metalcore should be happy to know that Drowningman are back (if you're unfamiliar, they released a split with Dillinger Escape Plan to give you an idea of their sound), and tonight the reunited band descend upon Brooklyn for this Saint Vitus show. Opening are local post-hardcore regulars Pilot to Gunner, whose initial career overlapped with Drowningman's a bit and who also recently reactivated.

Roseanne Cash, The Lone Bellow, Buddy Miller & Jim Lauderdale @ Damrosch Bandshell at Lincoln Center Plaza
Once just known as Johnny Cash's daughter, Roseanne Cash has been a country star in her own right for nearly 40 years. Catch her at this free show, part of both the Americanafest and Lincoln Center Out of Doors.

Temples @ Surf Lodge
UK psych band band Temples released their debut album earlier this, which is slick but well-done Britpop. If you're out in Montauk, this is a free show.

Horse the Band, Infinity Shred, We Are Not Our Bodies @ Marlin Room at Webster Hall
Horse the Band successfully combined metallic post-hardcore and Nintendo synths back in the aughts, and this year they're saddling back up again for their first tour in a while. They have a sense of humor too, so tonight's show should just be a fun time.

Pale Lights, Makeout Vertigo, Gingerlys @ Friends and Lovers
Pale Lights, fronted by former Comet Gain member Phil Sutton, just released Before There Were Pictures,and it's quite good, the sort of lightly psychedelic janglepop that Postcard Records and Creation used to release. It's also not that too far off from what Comet Gain does, either. (Also, Phil sounds a little like Lloyd Cole.) They headline a bill that also includes Gingerlys who are worth going early to see.

Pure Hell, Dead Tricks, Done with You, Sharp Lads @ The Grand Victory
Some call '70s-era band Pure Hell "The World's First Original All Black Punk-Rock Band." The jury's still out on whether them or Death came first, but either way, these guys made some real killer punk back in their day which was both ahead of its time and worthy of being ranked among the other '70s greats if only they had gotten the recognition they deserved. They've been playing shows again and if this kind of stuff interests you, you won't want to miss this one.

Sky Ferreira @ Verboten
Sky Ferreira has the bright pop songs ("You're Not the One") and the grungy, angsty ones ("I Will"), so it makes sense she's successfully catered to crowds while sharing bills with both Miley Cyrus and DIIV. Tonight she's on her own though at one of Williamsburg's poppin' new dance clubs.