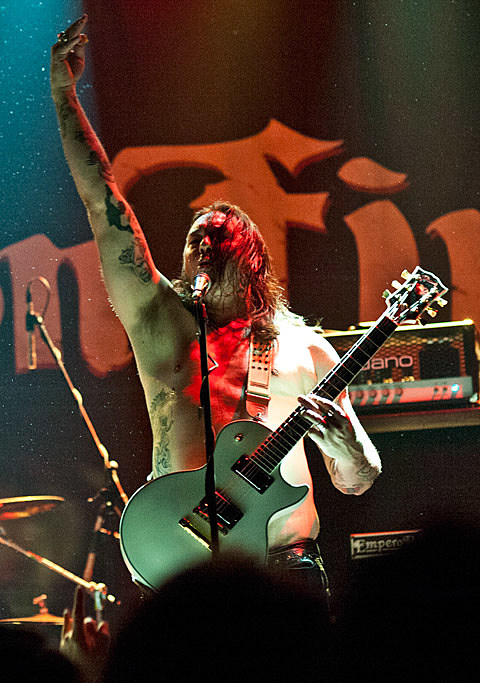 High on Fire, Blackest @ MHOW
While the legendary Sleep will be heading out on tour soon, its members are still keeping busy with their other projects before and after that, including Matt Pike's High on Fire who will bring stoner rock riffs for days at tonight's free (if you RSVPed) Converse Rubber Tracks show.

The Men, Purling Hiss, Honey, Friend, DJ Toy @ Brooklyn Night Bazaar
Since their debut LP in 2010, The Men have put out a record a year and have never made the same album twice. They've gone from dark, heavy punk to Replacements-y indie rock to Crazy Horse-style country rock jams. And it's a good show all around. The grungy Purling Hiss and the heavy psych rock of Honey should fare well with The Men's crowd.

ARMS, Conveyor @ Mercury Lounge
Brooklyn band ARMS (the current project of former Harlem Shakes guitarist Todd Goldstein) pay tribute to some of their influences  on a new covers album, Backwards Record, which is out next month. Hopefully we'll hear a few of those tonight.

Sharkmuffin, Food Stamps, The Sleepy ZZZ, Surfbort, Foreign Speakers @ Muchmore's
Brooklyn garage rock trio Sharkmuffin are a newer band, but sound straight out of the garage rock boom of the last decade. Picture something between Yeah Yeah Yeahs and Sahara Hotnights and you'll get an idea.

Downtown Boys, Weird Womb, Vomitface, Big Huge @ Shea Stadium
Downtown Boys are one of those bands you have to see live to fully experience. They make politically-charged, saxophone-fueled punk, the singer gives impassioned speeches between songs, and almost all the members end up in the crowd. Noisy punks Weird Womb are worth catching too.

Frontier(s), Banquets, Image Society @ Saint Vitus
Though many of the now-classic '90s emo bands are currently reunited (like Sunny Day Estate, Mineral, American Football, The Get Up Kids, Braid, Knapsack and The Jazz June), one of those, Elliott, sadly remains broken up. However, singer Chris Higdon is currently fronting the band Frontier(s) who keep that '90s sound alive and well without sounding like a nostalgia project.