Arcade Fire in Austin in April (more by Tim Griffin) 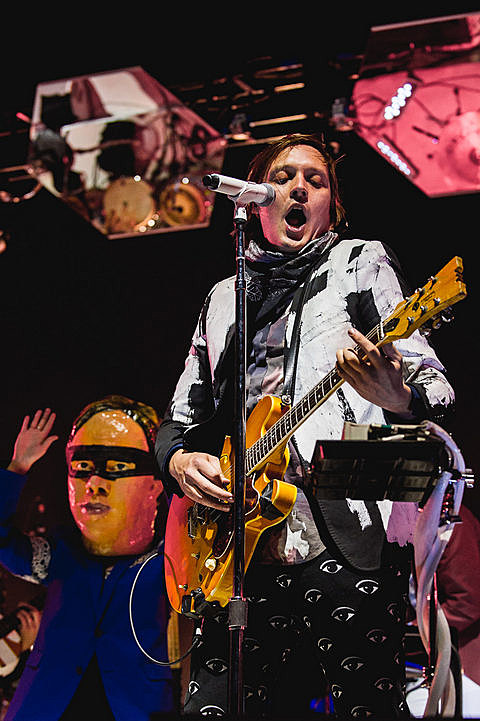 Arcade Fire, The Unicorns, Dan Deacon @ Barclays Center
Arcade Fire's massive Reflektor tour finally rolls into NYC tonight, for its first of three huge arena shows at Barclays Center. What New York-centric songs will they cover? What bobblehead celebrities will make an appearance? These shows are also doubly special because they're three of the VERY few reunion dates for fellow Canadian indie faves the Unicorns. And night three (Sunday) will be triply special with NYC punk legends Television.

X @ City Winery
LA legends X will be performing their first four albums in full over a four-night stand at City Winery. Tonight is their classic second album, Wild Gift. Sold out.

OFF!, Bad Antics, Gay Kiss @ Europa
Keith Morris' classic-hardcore-style supergroup OFF! are unfortunately without their regular drummer for this tour, but they didn't get just anybody to replace him. Dale Crover of the Melvins will be sitting behind the kit tonight, so this should be a cool one to catch.

Kevin Morby, Steve Gunn, Daniel Bachmann, Weyes Blood @ Baby's All Right
Guitar-slinger Steve Gunn, who you may have seen play with Kurt Vile's band, will release his new album, Way Out Weather, on October 7 via Paradise of Bachelors. Catch some of that live tonight as he tours with the terrifically talented Kevin Morby (Babies, Woods) and by all means get their early for Weyes Blood.

The Clean, Roya @ Glasslands
Infinitely influential New Zealand legends The Clean just got their entire output released on one four-LP vinyl box via Merge and play their second of two sold-out NYC shows tonight. Opening is Roya which features Clean drummer (and Brooklyn resident) Hamish Kilgour on drums and Rahil of Habibi on lead vocals.

Kitty, Buckwheat Groats, AWKAFINA, Maxo, Swag Toof @ Palisades
If you like your rap with a sense of humor (and hey, who doesn't?), there's plenty of that here.

Mates of State, Mike Lawrence, Sheng Wang, Christie Young @ Pine Box Rock Shop
Mates of State have been putting out quality indie pop of the Barsuk/Polyvinyl variety (the labels they are/were signed to) for over a decade now, and though it's been three years since a new album, they'll have no lack of solid material at this free show.

RJD2 @ Rocks Off Concert Cruise
Hop aboard tonight's cruise and get a healthy helping of alt-hip hop beats from the man who's been behind Aesop Rock, Cage, Soul Position and plenty more.

The Sidekicks, Sundials, Dowsing, Chumped @ Saint Vitus
If you dig bands that toe the line between indie rock and punk, all four of the ones on this bill at Saint Vitus tonight do that and they do it well.

Beiju, ONWE, Bodega Bay, Babychange, Madam West @ Bowery Electric
It's no surprise to see an indie band with a little irony thrown it, but ONWE practically relies on it. It's catchy stuff either way.

Guided By Voices, Boogarins @ The Paramount
The ever-prolific Guided by Voices will play surely another marathon set tonight, boozy and riff-filled. Brazil's Boogarins are worth showing up early to catch.

Cymbals Eat Guitars @ Vibe Lounge (Long Island)
Cymbals Eat Guitars make some serious rock music on their new album, LOSE, which expands upon their already-solid sound and includes some of their best songs yet. Tonight they're on Long Island. After this, five more NYC shows to go.

Earthless, The Shrine @ Mercury Lounge
Earthless are trusty providers riffs on riffs on riffs, and The Shrine may not offer the same kind of 14-minute epics, but they've got some shredders too.

Mr. Scruff, Monk One @ Output
Known for his 1999 hit "Get a Move On" and DJing marathon sets, veteran Ninja Tune act Mr Scruff brings a light, playful touch to his brand of electronica.

Pete Swanson, Alberich, Vereker @ Baby's All Right
Pete Swanson once named an album Punk Authority, which is actually a very fitting title, but don't expect guitars at Baby's tonight. It's gonna be noise-fueled electronics all the way.