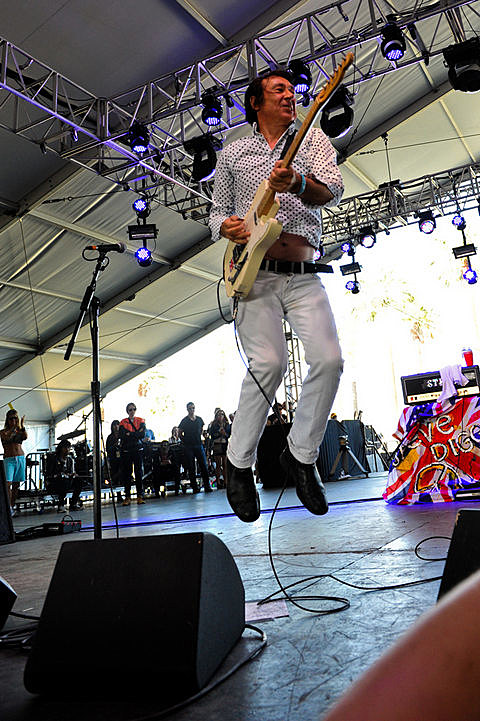 Buzzcocks, Titus Andronicus @ Webster Hall
This is an excellent generation-crossing bill for punk, with one of the best bands of the era -- no qualifiers necessary -- Buzzcocks, and one of today's finest bands in the genre, NJ's Titus Andronicus (who have headlined this venue themselves before).

Mineral, Into It. Over It. @ Bowery Ballroom
One of the most beloved bands of emo's late '90s period, Mineral, are back for their first tour in 17 years, and the first tour since the release of their slowcore-leaning classic swan song, EndSerenading. Tonight's the third of four sold-out NYC shows, all of which are opened by newer emo band Into It. Over It.

Skrillex, Evian Christ, Sophie, Lone @ MoMA PS1
It's the final Warm Up of the summer, and one of the best lineups of the season with Kanye collaborator Evian Christ, buzzy dancepop producer Sophie (best known so far for "Bipp" and "Hey QT"), and IDM raver Lone. Plus, special guests are promised. UPDATE: Skrillex is the headliner for the last Warm-Up. Not a joke. Also Forest Swords dropped off.

Evian Christ, Sophie, NGUZUNGUZU, The Deep @ 88 Palace
There's two ways you can keep the party going after Warm Up, this being one...

Fucked Up, Speedy Ortiz, Give @ Irving Plaza
Fucked Up may make highly ambitious punk records, but in a live setting they play like great punk bands always have: fast, loud and rowdy. Indie rockers Speedy Ortiz aren't to miss either, and DC punks Give should be a nice start to the night as well.

Fujiya & Miyagi, Zorch @ Brooklyn Bowl
Fujiya & Miyagi's new album, Artificial Sweetners, is their most synth-heavy yet, but otherwise keeps their brand of motorik funk pretty much intact. Their drummer for this tour is onetime Dirty on Purpose rhythm-master, Doug Marvin.

Cayetana, Chumped, Albondigas, Spirit of the Beehive @ Saint Vitus
Cayetana's great debut album comes out next week on Tiny Engines. It's a solid mix of indie rock, punk energy, and folky songwriting that Waxahatchee/Speedy Ortiz fans should find will be up their alley. See them tonight ahead of its release, and it's worth getting there in time for Brooklyn poppy punks Chumped too.

Ian Hunter and The Rant Band, Wreckless Eric & Amy Rigby @ The Bell House
Mott the Hoople frontman Ian Hunter and Wreckless Eric are both on this bill, which is a pretty cool pairing, and among other things it most likely means we'll get to hear "All the Young Dudes" and "Whole Wide World" at the same show.

Modern Baseball, I Am The Avalanche, Beach Slang @ Stone Pony
Modern Baseball and Beach Slang are two Philly bands who really know how to tap into the feelings of youth (the only difference is the actual ages of the members). Tonight's their second NYC-area show of the weekend, and this one also includes grungy punks I Am the Avalanche.

Aphex Twin album listening party
Get your first chance to hear SYRO at this listening party, location TBA, if you RSVP'd in time and got picked to go.