Cocorosie at Webster Hall in 2012 (more by Gretchen Robinette) 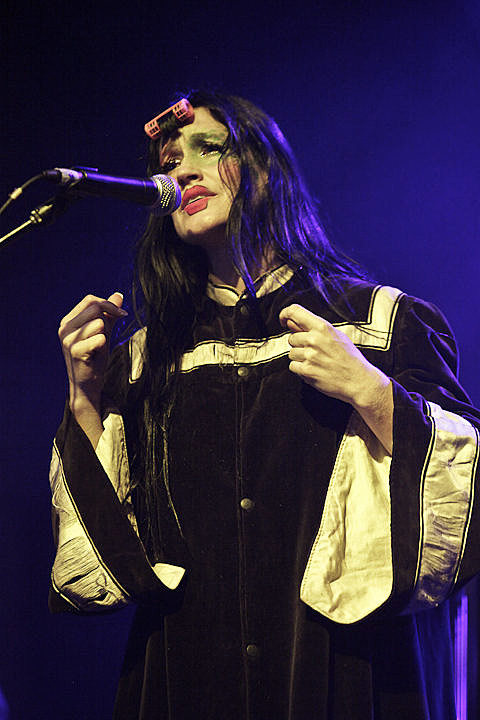 Cocorosie, Antony, Kembra Pfahler And The Girls Of Karen Black, Johanna Constantine @ Webster Hall
This is a benefit show, featuring old friends Cocorosie and Antony, for the upcoming exhibition FUTURE FEMINISM which happens at The Hole starting next week.

Mineral, Into It. Over It. @ Bowery Ballroom
One of the most beloved bands of emo's late '90s period, Mineral, are back for their first tour in 17 years, and the first tour since the release of their slowcore-leaning classic swan song, EndSerenading. Tonight's the last of four sold-out NYC shows, all of which are opened by newer emo band Into It. Over It.

S. Carey, Califone, Doe Paoro @ Le Poisson Rouge
This show is being co-headlined by Bon Iver member Sean Carey, aka S. Carey, and longrunning indie rockers Califone. Doe Paoro, who worked with Bon Iver's Justin Vernon on her last release, opens. S. Carey will be back in NYC in the fall to open for American Football.

Punch, Crushed, Curmudgeon, Water Torture @ Death by Audio
If you like totally cathartic, rapid-fast hardcore, Punch is not to be missed. Water Torture do a good job at satisfying a similar craving too.

clipping., Haleek Maul, Tallesen @ Glasslands
Sub Pop avant-rappers clipping. have been on tour with their labelmates Shabazz Palaces, and if you dig what Shabazz does, you'll likely be into clipping. as well.

Wedding Dress, Future of What, Unicycle Loves You, Lightfoils, Slim Twig @ Baby's All Right
Wedding Dress feature members of Maps & Atlases and Joan of Arc, and though they make more laid back, indie pop-leaning stuff here than their main projects, fans of both are still likely to dig. Tonight's their second NYC show of the weekend.