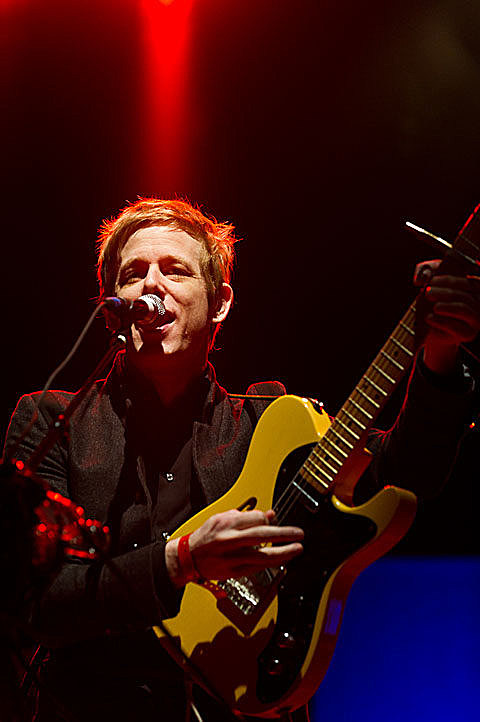 Spoon, !!! , Operators (ex-Wolf Parade) @ Central Park Rumsey Playfield
Having released the terrific They Want My Soul earlier this summer, Britt Daniel and the new line-up of Spoon play this sold out show tonight. (They were great at the McKittrick secret show back in August.) In addition to punk-funk exclamationists !!!, Dan Boeckner's new band Operators open tonight... and between them and Spoon, the entire lineup of Divine Fits will be there tonight, so it's not out of the realm of possibilities that we might bet a song or two from that.

Bob Mould, Cymbals Eat Guitars @ Bowery Ballroom
Between his time in Husker Du, Sugar, and a prolific solo career, the legendary Bob Mould has over three decades of great material to pull from for this week's 3 NYC shows, this being the first. Openers Cymbals Eat Guitars are not to be missed either. This year's LOSE is one of the year's most powerful indie rock albums.

Brad Mehldau, Chris Thile @ BAM (Harvey Theater)
Contemporary jazz composer Brad Mehldau is on his second of two nights at BAM for the Nonesuch anniversary, and this one's extra special because he'll be joined by Nickel Creek/Punch Brothers' Chris Thile.

Man or Astro-Man?, The Pack A.D., Wray @ Brooklyn Bowl
Everyone's favorite sci-fi surf punk band Man or Astro-Man? are back in town for two NYC shows this week, tonight's being the first.

Nick Waterhouse, PEP @ Rough Trade
LA classic soul/R&B lover Nick Waterhouse, who has made his way through NYC twice this year already, is back to lay down some live grooves, many of which are from his new album, Holly.

"ASK ANDREW LIVE" w/ Andrew WK @ Santos Party House
This is billed as "a night of in-person intimate advice on life, love and" -- yep, you guessed it -- "partying."

The Stevens, Free Time @ Cake Shop
Melbourne's The Stevens pull from a variety of landmark indie rock -- The Clean, Guided by Voices, Pavement -- but don't sound quite like any of them. The band's debut album,The History of Hygiene, is 24 tracks of lo-to-mid-fi shambly pop perfection. No doubt there is a lot of this type of stuff out there, but The Stevens make superior product

Interpol signing @ Other Music (5 PM)
Interpol played three NYC shows last week in celebration of new album El Pintor which is out this week. Buy it and get the band to deface it with Sharpies at Other Music tonight.

Sweet @ The Slipper Room
Seth Herzog's comedy night Sweet is celebrating its 10th anniversary with three guest-filled shows this week, this is the final night. Herzog has promised appearances by Colin Quinn, Hannibal Buress, Vanessa Bayer, Dave Hill, and Questlove at some point during the week, and folks like Jim Gaffigan, Todd Barry and more have appeared as unannounced guests. Who will show up tonight?