Bob Mould at Williamsburg Park in 2012 (more by Sachyn Mital) 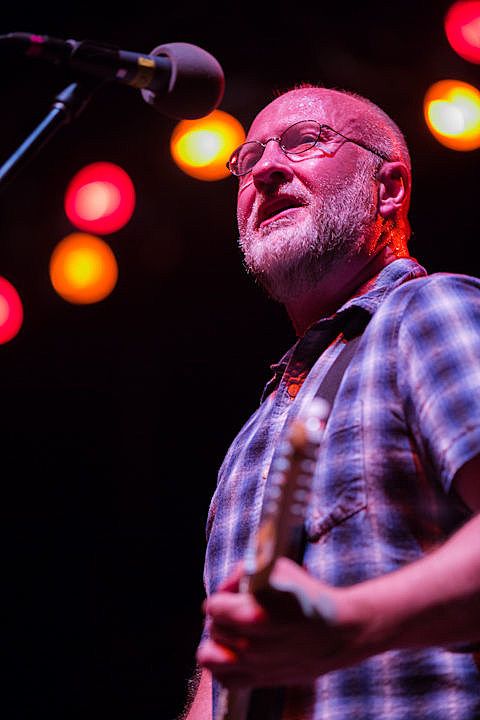 Bob Mould, Cymbals Eat Guitars @ Bowery Ballroom
Between his time in Husker Du, Sugar, and a prolific solo career, the legendary Bob Mould has over three decades of great material to pull from for this week's 3 NYC shows, this being the second. Openers Cymbals Eat Guitars are not to be missed either. This year's LOSE is one of the year's most powerful indie rock albums.

Ducktails, Limited, The Stevens @ Baby's All Right
Real Estate guitarist Matt Mondanile takes center stage with Ducktails, whose music isn't so far off from his other group's jangle. Ducktails guitarist Alex Craig, meanwhile, fronts the '80s-romo-loving Limited. Do get there early to catch Australia's terrific The Stevens.

Shannon and the Clams, Liquor Store, Juniper Rising, Hobocop @ Death By Audio
With a sound straight out of the early days of Rock n' Roll, Shannon & the Clams bring big hooks and personality (and a lot of fun) to the table. This is Shannon's second  of three sold-out NYC shows this week.

The Young, Fly Golden Eagle, Degreaser @ Glasslands
The Young's new LP is a great dose of psychedelic punk and a step up from their last. Tonight they return to NYC for their first of two shows here this week.

Man or Astro-Man?, The Pack A.D. @ Mercury Lounge
Everyone's favorite sci-fi surf punk band Man or Astro-Man? are back in town for two NYC shows this week, tonight's being the second.

Sylvan Esso, Landlady @ Rough Trade
Watching the crowds at their shows opening for tUnE-yArDs (and on their own) it was clear Sylvan Esso have an audience of their own which is growing by the minute.  Like Friday's Bowery Ballroom show, this one is sold out... next stop Terminal 5.

Naomi Punk, Sleepies, Nine of Swords, Low Fat Getting High @ Shea Stadium
This is a good bill of NYC punk bands, and they're promising a special guest headliner which we can presumably at least narrow down to genre. Who do you think it is? UPDATE: It's Naomi Punk.

Elephant Stone, Lunifred Benjamin, High Waisted @ The Rock Shop
Montreal's Elephant Stone share their name with a Stone Roses single and on their new album Three Poisons, they definitely embrace the Madchester baggy sound. They're pretty killer live -- and how often do you get to see a rock band with sitar?

Museum of Love (Pat Mahoney + Jee Day), Tiger & Woods, Jacques Renault @ Verboten
While Museum of Love do play live as a band (and a good one too), tonight's a DJ night for Pat & Jee Day.

Nik Turner's Hawkwind, Witch Mountain, Hedersleben, Tonstartssbandht @ Marlin Room at Webster Hall
Sax and flute man Nik Turner was a member of Hawkwind in the '70s and '80s and now fronts his own version of the Spacerock pioneers. His backing band, Hedersleben, gets their own opening set, and first up is Montreal/NYC experimental duo Tonstartssbandht.

Diane Cluck @ Rockwood Music Hall
Folk singer Diane Cluck put out an excellent album this year with Boneset and she's got two shows at Rockwood this week, this being the first.