White Lung at Bowery Ballroom in 2013 (more by Fred Pessaro) 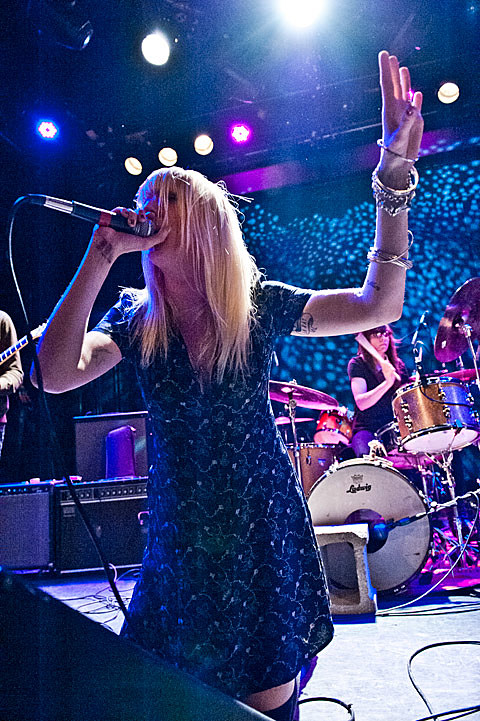 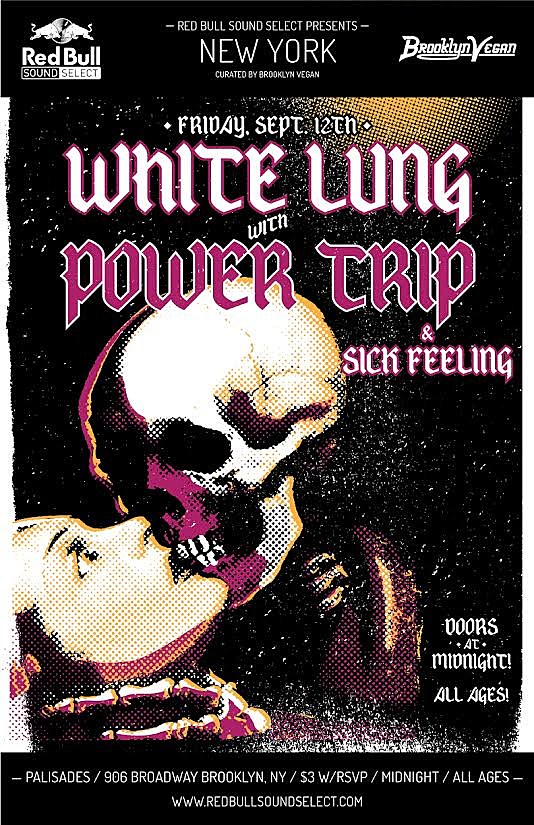 White Lung, Power Trip, Sick Feeling @ Palisades (MIDNIGHT)
The next BrooklynVegan-curated installment of Red Bull Sound Select is this late show tonight and we hope you're as excited about it as we are. It's co-headlined by one of the most menacing yet melodic punk bands around, Vancouver's White Lung, and Texas's Power Trip, who do crazy justice to the sounds of early thrash and crossover bands. Opening is Sick Feeling, a newer band from Brooklyn with members of Ink & Dagger, Trail of Dead, Trash Talk and more. It's only $3 at the door if you RSVP ($10 if you don't), and with its midnight start there's even time to catch another show or grab a drink with friends beforehand. Entry is on a first come, first served basis. See you there!

Shannon and the Clams,TacocaT, Las Rosas @ Palisades
Before our late night show is this third sold-out NYC show this week with Oakland, CA's Shannon & The Clams, made extra fun with the addition of Seattle's surfy/poppy TacocaT. Sold out, but if you're going...do stick around for our late night show.

Karen O @ Le Poisson Rouge
It's the fourth and final night of Yeah Yeah Yeahs singer Karen O's run of intimate shows in NYC, and the first at a regular venue. The shows are in support of Karen's equally intimate Crush Songs, her first solo album (but recorded seven years ago).

Animal Collective (DJ set) @ Brooklyn Bowl
Panda Bear's busy this year touring and prepping his next solo album, but the other AnCo members are finding time to do other things like DJ sets, tonight's being their first of three upcoming gigs at Brooklyn Bowl (they're doing one a month until November). Tonight it will just be Geologist and Deakin, but Avey Tare joins at the next two dates.

The Young, Charly Bliss @ Mercury Lounge
The Young's new LP is a great dose of psychedelic punk and a step up from their last. Tonight's their second of two NYC shows this week.

Fascinator, The Stevens, Willful Boys @ Don Pedro
This is a late add for Melbourne's The Stevens (Pavement-style indie rock) whose NYC plate is already pretty full. This is an all-Australian bill, with expats Willful Boys opening the night.

Pleasure Leftists, Ivy, The Lawsuits, Mercury Rising @ The Acheron
If you're into modern bands taking on '80s post-punk, Cleveland's Pleasure Leftists are one of the bands that do it well. Their punky Katorga Works labelmates Ivy are worth catching too.

Mad Juana, Cheetah Chrome, Miriam, John Cooper Clarke @ Bowery Electric
This is a pretty stacked bill for fans of veteran punk and garage rock. Dead Boy Cheetah Chrome plays (his second of three NYC shows this week), as does UK punk poet John Cooper Clarke (his first of four NYC shows here), who hasn't played the US since the '70s. A-Bones drummer/singer and Norton Records co-founder Miriam plays, and it's one of her first few shows with this project. She plays again next month with The Muffs.

Sylvan Esso, Doe Paoro @ Bowery Ballroom
Watching the crowds at their shows opening for tUnE-yArDs (and on their own) it was clear Sylvan Esso have an audience of their own which is growing by the minute. Tonight is sold out... next stop Terminal 5. 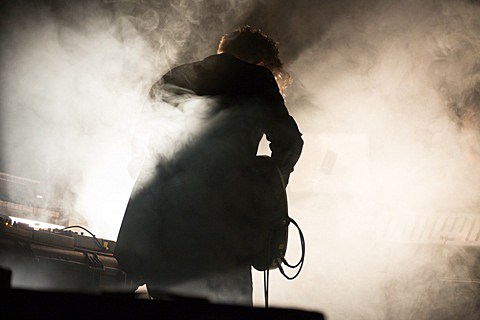 Darkside, Valentin Stip @ Brooklyn Masonic Temple
Nicolas Jaar and Dave Harrington successfully combined ambient electronics and progressive rock on their 2011 EP and 2013 LP (their only two releases), but unfortunately their collaborative project is coming to an end ("for now"). Tonight's their last show before the break, and their pal Valentin Stip is along for the ride. Naturally, it's sold out.

Lemonade, Starchild @ Baby's All Right
NYC synth trio Lemonade just released their new album, Minus Tide, via Cascine. Continuing to hone their style, the new LP is perhaps their most focused yet, matching '80s pop smarts to an effervescent balearic production. Tonight's the record release party

Youssou N'Dour @ BAM
Also part of Nonesuch Records at BAM (and Next Wave Festival), here's two rare chances to catch the acclaimed Senegalese singer-songwriter in a Stateside appearance. This is Night 1.

Chromeo, Big Freedia @ Central Park Rumsey Playfield
Montreal electro duo Chromeo know their way around a hook and have no problem pouring on the cheese (with a wink). Tonight's show is with bounce queen Big Freedia.

The Detroit Cobras, Hector's Pets, Blaire Alise and The Bombshells @ Bell House
Long-running garage rock cover band Detroit Cobras take on anyone from the Chiffons to Otis Redding to the Oblivians (whose Greg Oblivian is often on their recordings),

Diane Cluck @ Rockwood Music Hall
Diane Cluck at times echoes the psychedelic folk singers of the late '60s and at others the freak folk movement of the 2000s. No matter what she's doing, it's good stuff. Tonight's her second of two Rockwood shows this week.

Christopher Cross @ City Winery
With "Sailing," Christopher Cross is pretty much the "yacht" in Yacht Rock. Go to this tonight and you will literally be caught between the moon and New York City. It's crazy, but it's true.