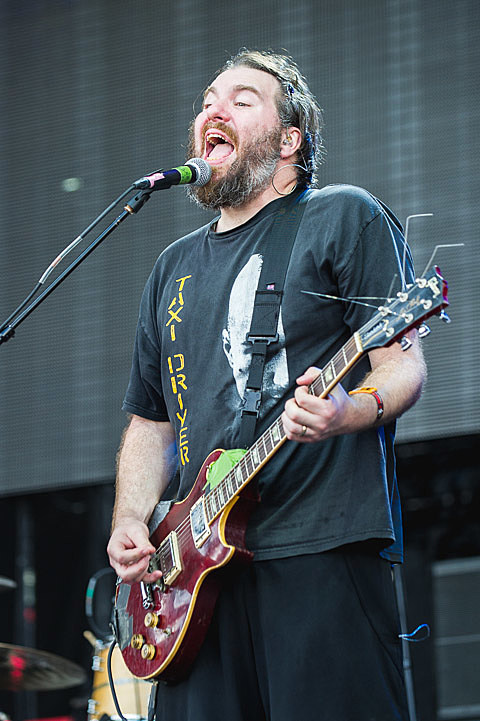 Atlas Sound, Ducktails, Mas Ysa @ Greenwood Park
As Atlas Sound, Deerhunter's Bradford Cox tones down the sonic assault his other band puts on in a live environment, but the songwriting is up a similar alley and equally strong. Tonight's show is with Real Estate side project Ducktails and Mas Ysa, and it's free.

Bob Mould, Cymbals Eat Guitars @ Music Hall of Williamsburg
Between his time in Husker Du, Sugar, and a prolific solo career, the legendary Bob Mould has over three decades of great material to pull from for this week's 3 NYC shows, this being the third. Openers Cymbals Eat Guitars are not to be missed either. This year's LOSE is one of the year's most powerful indie rock albums.

Pinback, Tera Melos @ Irving Plaza
Indie rock vets Pinback are celebrating the tenth anniversary of their classic album Summer in Abaddon this year and are currently on tour in support of that. Math rockers Tera Melos are a bit different in style but a good match.

Phantogram, Action Bronson @ Pier 97
It's a double bill of indie pop from Phantogram and hip hop from Action Bronson on Pier 97 tonight, and if that sounds weird to you, don't forget Phantogram were prominent collaborators on the last Big Boi album.

The Members, The Say So's, Swanky Tiger, Darren Deicide @ The Studio at Webster Hall
Best known for their classic 1979 punk single "The Sound of the Suburbs," UK band The Members dabbled in pop ("Working Girl") and reggae ("Offshore Banking Business"). The band currently features songwriter/frontman JC Carroll, plus Chris Payne and Nigel Bennett all of whom were in the band during The Members classic period.

The Gaslight Anthem, Jimmy Eat World, Against Me! @ PNC Bank Arts Center
The Gaslight Anthem changed things up for their fifth album this year, but whether you like the new sound or not, they'll still likely have plenty of old favorites ready for tonight. And this whole bill is loaded. Against Me!, who put out one of their best albums of their career this year, kick off the night. Following them is Jimmy Eat World who plan to play Futures in full on tour this fall, but what will they play tonight?

Mutual Benefit, Soft Cat, Bellows @ Bowery Ballroom
Mutual Benefit makes hushed chamber pop that anyone into The Antlers or Sufjan should be a fan of. Openers are well-matched tonight too.

Heavens Gate, Raw McCartney, Milk Dick, Bodega Bay, Pill @ Death By Audio
Out of the ashes of Sweet Bulbs, Heaven's Gate took some of their old band's dreamy noise, but took it in a significantly different direction, playing to singer strengths and became more of punky rock band... while still using a lot of effects pedals. Last year's debut album is a terrific representation of what Heaven's Gate have become -- confident, hooky, and pretty damn kick-ass.

The Life and Times, Lives of the Obscure @ Knitting Factory
Post-hardcore vets Shiner briefly reunited a couple years back, and though that's over, singer Allen Epley is still active with his other band The Life and Times, who put out their fourth record this year.

Junglepussy, Celeste, Princess Nokia, DJ Patrick A Reed @ The Acheron
If you like rap in the UNO/Mykki Blanco/Le1f realm, this bill is full of that kinda stuff and should be right up your alley.

Power Trip, Ajax @ The Acheron
After the Junglepussy show, things get heavier at Acheron for this late show from Dallas thrash/crossover faves Power Trip and Brooklyn punks Ajax. Power Trip's 2 AM set at Palisades last night was nuts and tonight should be no different.

Alarm Will Sound @ BAM
Part of Nonesuch Records at BAM, this is the second performance by 20-piece band Alarm Will Sound, tonight performing works by Tyondai Braxton, Steve Reich, and Donnacha Dennehy.

Youssou N'Dour @ BAM
Also part of Nonesuch Records at BAM (and Next Wave Festival), here's your second rare chancs to catch the acclaimed Senegalese singer-songwriter in a Stateside appearance.

Steely Dan @ The Paramount
Donald Fagen and Walter Becker bring Steely Dan's "Jamalot Ever After" tour to The Paramount for two nights, this being the first. Wear your bad sneakers if you like, but we have a feeling they don't serve pina coladas there.

Elephant Stone @ The Saint
Montreal's Elephant Stone share their name with a Stone Roses single and on their new album Three Poisons, they definitely embrace the Madchester baggy sound. They're pretty killer live -- and how often do you get to see a rock band with sitar?

Life of Agony, A Pale Horse Named Death, Diablo Blvd @ Starland Ballroom
Before this year's European tour, Life of Agony hadn't played in a few years as singer Keith Caputo transitioned to Mina Caputo and took time to do her own thing (including open for Laura Jane Grace). Now they're back though, and tonight's the first hometown-area show.