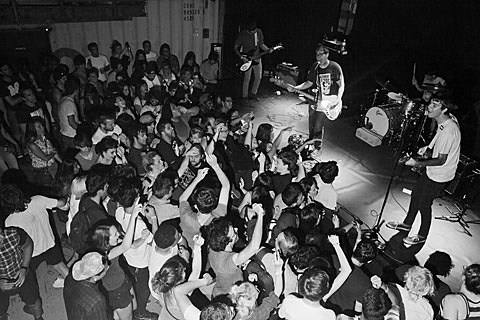 Love Inks at MHOW in 2013 (more by Amanda Hatfield) 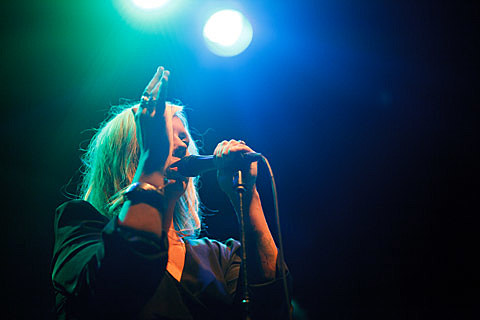 John Darnielle (reading), John Hodgman @ Le Poisson Rouge
While Mountain Goats main man John Darnielle has always been a storyteller, he's never written a book before now. His first novel, Wolf In White Van, comes out this week and he'll be reading from it and discussing it in NYC tonight. Joining him is Daily Show correspondent John Hodgman.

Joyce Manor, The Exquisites, Mike Bell and The Movies @ Bowery Ballroom
Cali rippers Joyce Manor make melodic punk with every ounce of fat trimmed (their most recent and longest album is 10 songs in 19 minutes), and those songs truly come alive at their shows. Tonight's their largest headlining gig in NYC yet and sold out. Sure to get rowdy.

No Joy, Tonstartssbandht @ Mercury Lounge
No Joy's shoegaze is the way it should be, a mesmerizing wall of sound and extremely loud. They're on tour opening for Deafheaven (just played MHOW last night), but will squeeze in this small headlining show tonight. Eccentric duo Tonstartssbandht open.

Strand of Oaks, Christopher Denny @ Rough Trade
Timothy Showalter has been making excellent folk as Strand of Oaks for a few years now, but for this year's HEAL LP he added a full band and a more rock-inspired sound and it's been putting him in increasingly larger venues. They'll be back in the winter for a Bowery Ballroom show, but will first play the smaller Rough Trade tonight (sold out). Opening is unique country singer Chris Denny, who has a new album out on Partisan this year.

Voice Coils, Ovlov, Ronald Paris, New Firmament @ Death by Audio
Brooklyn's Voice Coils include members of various local (or local-ish) bands, including Roomrunner, Mitski, Extra Life, Porches, Skeletons, Couch Slut and more. Together they make metallic prog and though that may be an unlikely style from this group, they do it well. Tonight's their 7" release show.