The Replacements at Coachella 2014 (more by Dana (distortion) Yavin) 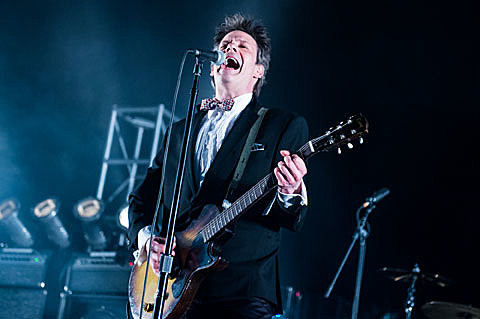 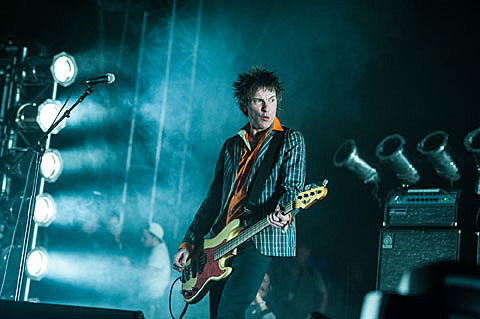 The Replacements, The Hold Steady, Deer Tick @ Forest Hills Stadium
Original Replacements members Paul Westerberg and Tommy Stinson have been back on the road since late 2013 for their first live shows in years, and tonight they finally bring the reunion to NYC. Their sets have pretty much been all hits so you can probably expect to hear a lot of the songs you're hoping for tonight. Both openers are bands that are definitely influenced by The 'Mats, and are also forces of their own. Whole show should be fun all around.

Devendra Banhart, Stephin Merritt, Iron and Wine @ BAM
Part of Nonesuch Records at BAM, tonight is a trio of solo performances from the label's more pop side. Merritt, of Magnetic Fields, Gothic Archies, Future Bible Heroes and other groups, doesn't play out so much anymore so tonight is a somewhat rare live show for him.

Metronomy, Dawn Golden @ Warsaw
Metronomy's new album, Love Letters, the normally electronic-leaning band headed into almost early-'70s Kinks territory. Live, though, the songs bounce a little more than on the record, and they don't skimp on favorites like "The Look," "Radio Ladio," and "The Bay."

The Weeknd, Schoolboy Q, Jhene Aiko @ Barclays Center
The Weeknd got some buzz off the strength of his trilogy of mixtapes back in 2011, and now with a proper full length under his belt and three more years of fast-rising exposure, he's taking on his first headlining arena show in NYC. Good openers too: Black Hippy rapper Schoolboy Q (whose solid Oxymoron came out this year), and druggy R&B singer Jhene Aiko.

King Crimson @ Best Buy Theater
Robert Fripp's legendary prog band King Crimson are back and for this tour Fripp will be joined by Gavin Harrison (drums), Bill Rieflin (drums), Pat Mastelotto (drums), Tony Levin (bass and vocals), Mel Collins (Sax, flute), and Jakko Jakszyk (guitar, vocals). Crimson's got tons of different styles throughout their long career that dates back to the late '60s, so tonight should be anything but predictable. Second of four shows.

The Gooch Palms, Life Stinks, Lame Drivers @ Cake Shop
Seemingly every garagey/psych Australian band are on tour in the US right now, and tonight NYC gets Newcastle duoe The Gooch Palms, their first of two shows here.

Les Bonhommes, So Cow, Shark?, Shorts @ Death By Audio
Les Bonhommes are one of Greg Saunier's many non-Deerhoof bands; Ireland's So Cow makes superior indiepop. This will be a good night at DbA.

Cibo Matto, Nels Cline @ McKittrick Hotel
There's no doubt that Cibo Matto are fully back in action, having already played a ton of hometown shows lately. Here's another, and it's with guitar great Nels Cline.

Andy Stott, Demdike Stare, Millie and Andrea, Miles, Sean Cantry @ Output
Electronic greats Andy Stott and Demdike Stare join forces tonight for what is already an excellent double bill, but they'll be sweetening the deal by including a set from Millie & Andrea, the collaborative project of Andy Stott and Miles of Demdike Stare.

Steely Dan @ The Capitol Theatre
Donald Fagen and Walter Becker bring Steely Dan's "Jamalot Ever After" tour to The Cap. Wear your bad sneakers if you like, but we have a feeling they don't serve pina coladas there.

Sam Smith @ Hammerstein Ballroom
Sam Smith's solo music may not get you dancing like his Disclosure collaboration does, but head to Hammerstein tonight to see what else he can offer.

OK Go @ Bowery Ballroom
OK Go aren't the most consistent band, but they're putting out their fourth album next month and from the sound of its lead single it may see them in going in more of a synth pop direction. They'll DJ Glasslands after this show.

Hari Kondabolu @ Carolines On Broadway
NYC comedian Hari Kondabolu (older brother of Das Racist's Dapwell) put out his debut standup album out this year on Kill Rock Stars and has continued to be a regular on the scene since.