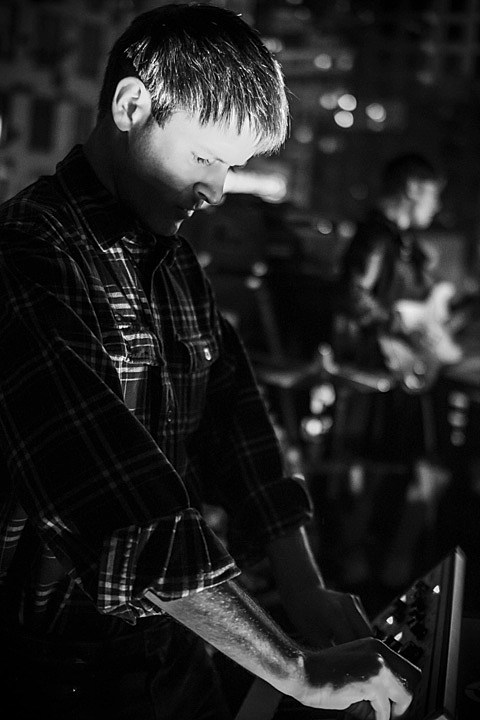 King Crimson @ Best Buy Theater
Robert Fripp's legendary prog band King Crimson are back and for this tour Fripp will be joined by Gavin Harrison (drums), Bill Rieflin (drums), Pat Mastelotto (drums), Tony Levin (bass and vocals), Mel Collins (Sax, flute), and Jakko Jakszyk (guitar, vocals). Crimson's got tons of different styles throughout their long career that dates back to the late '60s, so tonight should be anything but predictable. Fourth of four shows.

The Drums @ Rough Trade (1:30 PM)
Having played two much larger, sold-out NYC shows already, The Drums play this Rough Trade afternoon show today. You need to buy a copy of new album Encyclopedia which then gets you two entry wristbands into the show.

Simian Mobile Disco, JDH & Dave P @ Music Hall of Williamsburg
SMD's new album was recorded live with old-school analog equipment and no laptops. The duo will be playing it live just like they made it.

Eugene Mirman Comedy Festival @ The Bell House
Two events close out the Bell House's 2014 EMCF: 'You're the Expert' which is "a live show, podcast, and new public radio program that uses comedy to make academic research more accessible and exciting" (tickets available); and then the ever-popular 'Star Talk Live!' cohosted by Mirman and Bill Nye (sold out).

Apache Dropout, Degreaser, xNoBBQx, X Wave @ Death by Audio
Lots of Australians on this bill too: Brisbane's noisy xNoBBQx and X Wave, plus Brooklyn's Degreaser (which contains a couple), plus headliners Apache Dropout who make records for the great Trouble in Mind label.

Why?, Dessa @ Le Poisson Rouge
Hip hop-inspired indie rockers Why? and Doomtree's spoken word/rapper/neo-soul singer Dessa are on a tour together which comes to NYC tonight for what should surely be an eccentric show all around.

Steely Dan @ Capitol Theatre
Donald Fagen and Walter Becker bring Steely Dan's "Jamalot Ever After" tour to The Capitol Theatre . Wear your bad sneakers if you like, but we have a feeling they don't serve pina coladas there. Cuervo Gold, perhaps.

Phil Lesh & Friends @ Forest Hills Tennis Stadium
We're sure The Grateful Dead are still loathed by many indie rockers out there, but not all. If you're at all interested, Phil & Friends put on great shows and the setlists are loaded with fan favorites.