Nick Cave at Prospect Park in July (more by PSquared) 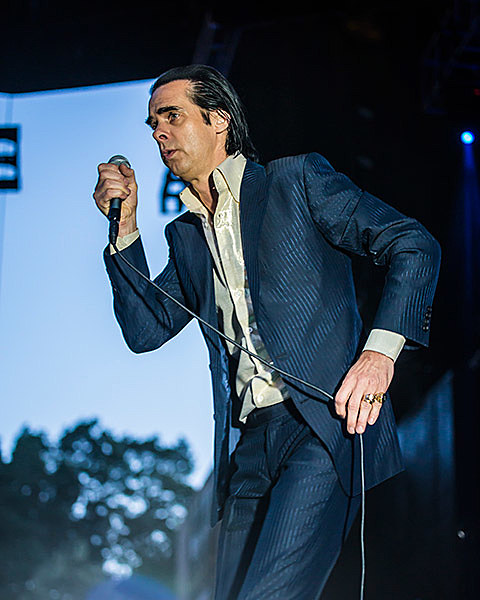 Nick Cave @ Town Hall
Nick Cave returns to NYC yet again, for another screening of his semi-documentary 20,000 Days on Earth and a solo live performance. Sold out.

King Crimson @ Best Buy Theater
Robert Fripp's legendary prog band King Crimson are back and for this tour Fripp will be joined by Gavin Harrison (drums), Bill Rieflin (drums), Pat Mastelotto (drums), Tony Levin (bass and vocals), Mel Collins (Sax, flute), and Jakko Jakszyk (guitar, vocals). Crimson's got tons of different styles throughout their long career that dates back to the late '60s, so tonight should be anything but predictable. Third of four shows.

Windhand, All Them Witches, Ilsa, Elder @ Saint Vitus
Windhand's doom metal (like most doom metal) is indebted to other bands, especially Electric Wizard, but they've got a sense of melody that makes them genuinely catchy. Their psych-rockin' tourmates All Them Witches are worth catching as well.

Rhett Miller @ City Winery
While his band The Old 97's just released their new album, Most Messed Up, frontman Rhett Miller is in town tonight for this solo show.

Stiff Little Fingers, The So So Glos @ Irving Plaza
Jake Burns has kept the SLF flame alive through myriad lineup changes, though original bassist Ali McMordie is now part of the lineup again. Expect burners like "Suspect Device," "Alternative Ulster" and other favorites.

Yacht, White Fang @ Mercury Lounge
Having just singed to Downtown records, Portland dance duo Yacht will be trying out new material on this tour, plus old favorites too. This is their first of three NYC shows with White Fang. Tonight is sold out.

Palomar, The Oranges Band, So Cow, Overlord @ Cake Shop
Palomar have been around since the late '90s and have outlasted all sorts of other more hyped Brooklyn bands and scenes, putting out quality indie rock LP after quality indie rock LP. Tonight they play with another longrunning indie band, The Oranges Band, and Ireland's So Cow. That's a good show!

The Hacker, UNTOLD, Helix, Hank Jackson, Octo Octa @ 88 Palace
UK electronic musician Untold has put out tons of impressive material over the past few years, and had a hand in starting the post-dubstep movement, including an early association with James Blake. Tonight he's in NYC.

Javelin, Ejecta, The Great Void @ Glasslands
Avant-pop band Javelin team up with the Neon Indian-related and nudity-lovin' Ejecta tonight for this show at Glasslands.

United Waters, Samara Lubelski @ Silent Barn
NY's United Waters (the project of ex-Mouthus member Brian Sullivan) put out their album Sunburner earlier this year on Bathetic (the label Angel Olsen used to be on), and it's 8 tracks of good pop songwriting covered by a hazy coat of lo-fi. Samara Lubelski, who played in Chelsea Light Moving with Thurston Moore and several other projects, is on the bill too.

Steely Dan @ Capitol Theatre
Donald Fagen and Walter Becker bring Steely Dan's "Jamalot Ever After" tour to The Capitol Theatre . Wear your bad sneakers if you like, but we have a feeling they don't serve pina coladas there.

Eugene Mirman Comedy Festival @ Bell House
The EMCF has two shows at The Bell House tonight: the always popular Pretty Good Friends, and then later one called "You Never Know Who Might Drop By." Both are sold out.