Broken Bells at Webster Hall in March (more by PSquared) 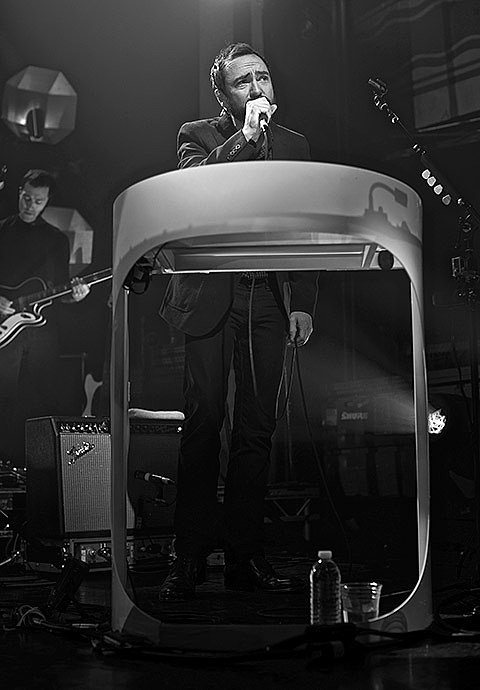 Laurie Anderson, Kronos Quartet @ BAM
Part of Nonesuch Records at BAM, legendary boundary pusher Anderson teams with the Kronos Quartet for what is sure to be a special evening, their first-ever collaboration -- "Landfall" which was inspired by Hurricane Sandy.

Caetano Veloso @ BAM
Singer/composer/guitarist/writer/political activist Caetano Veloso has been influential for nearly 50 years. For these shows, part of the Nonesuch Records at BAM celebration, he'll perform original songs from his most recent album, the Latin Grammy Award-winning Abraçaço.

Uncle Acid and The Deadbeats, Danava @ Bowery Ballroom
The UK's Uncle Acid & the Deadbeats have been making killer stoner doom for a few years now. It's psychedelic, catchy, and truly heavy stuff. They're currently on their first North American tour and they'll finally hit NYC tonight. Danava haven't been around these parts in a few years, so cool to have them on board too. Sold out.

Rise Against, Touche Amore, Radkey @ Best Buy Theater
The band we're most excited about on this bill is Touche Amore, who make ambitious, serious, and sincere post-hardcore and are never short of fantastic at their shows.

Dick Diver, PC Worship, Dark Blue, Free Time @ Death By Audio
Where some of the Australia's current crop of bands look to New Zealand for inspiration, Dick Diver's sonic antecedents seem to be homegrown: shadows of The Go-Betweens' sweet strum and melancholic lyrical streak can be heard in their music. This bill is (Ayers) rock solid, with Aussies-in-Brooklyn band Free Time, noisemakers PC Worship and Philly angsters Dark Blue.

Teleman, LOLO, Laura and Greg @ Glasslands
Teleman, the band formed from the ashes of Pete & the Pirates, released their debut album earlier this year. Frontman Thomas Sanders hasn't really changed his MO, still writing memorable pop melodies and clever arrangements around them. This is their second US show.

Tom May and Greg Barnett (of The Menzingers), Brendan Kelly, Elway @ Knitting Factory
Chicago punk label Red Scare is celebrating its tenth anniversary with a big hometown show in October, but ahead of that there's a smaller pre-party in NYC tonight. The Menzingers' co-lead singers and The Lawrence Arms' Brendan Kelly will both be playing acoustic sets which should work out well considering both bands have that heartland songwriter vibe.

Boomtown Rats, The Stunning, Mundy @ Terminal 5
Fronted by the outspoken Bob Geldoff, the Boomtown Rats are Irish rock legends, huge stars in the UK, with a deep catalog of material to pull from. The band reformed last year for their first shows since 1986.

Charles Bradley, Ratking @ The Garage
Charles Bradley's classic soul will bring you back to the genre's '60s/'70s days. Ratking's alt-rap, on the other hand, sounds very modern. Should be an interesting double bill, and it's free (you just had to RSVP).

Old Wounds, Meek is Murder, Divider @ Grand Victory
It's the first of two NYC shows on the IO-presented Old Wounds tour, and tonight the metalcore ragers will be joined by two likeminded bands, the mathy Meek Is Murder and Divider.

MOTHXR (Penn Badgley's band), Rathborne, Mon Khmer, Prelow @ Brooklyn Night Bazaar
MOTHXR (who used to spell their name Mother) is fronted by Penn Badgely, who you may remember as Dan on Gossip Girl. These days music seems to be his focus. They headline a night of pop indie at Brooklyn Night Bazaar which is a free show.

Iggy Azalea, Vic Mensa @ Pier 97
The increasingly popular Iggy Azalea headlines this show tonight, and if you're going we recommend catching opener Vic Mensa, who's collaborated with Kaytranada, performed with Damon Albarn and toured with Disclosure, to name a few of the cool things he's been up to recently.

The Rentals, Someone Still Loves You Boris Yeltsin, Hooray for Earth @ Stone Pony
Matt Sharp's post-Weezer band The Rentals released their first album in 15 years this past summer via Polyvinyl which pretty much picked up where they left off (in a good way). Their labelmates Someone Still Loves You Boris Yeltsin open this show and tomorrows NYC show (which Mates of State are also on), which should make for a good double bill. Hooray For Earth are worth catching too.

Shawn Colvin, Steve Earle @ Capitol Theatre
Shawn Colvin and Steve Earle just wrapped up a tour together, titled "Songs and Stories, Together Onstage," which did not hit the NYC area but they're coming pretty close tonight. This should be a nice night with two great songwriters.

DJ Premier vs Pete Rock @ BB King Blues Club
Two legendary hip hop DJs, DJ Premier and Pete Rock, will be battling it out at BB King's tonight. Here's the details: "In a two DJ stage set up. Each legendary DJ/Producer known for their unique flavor and skills on the turntables, will spin their classic trademark tunes that have established their iconic presence in Hip Hop culture. A friendly 2 to 3 hour back and forth DJ battle show format will be performed....12 Rounds, Pound 4 Pound"