American Football in Chicago in August (more by Jeff Ryan) 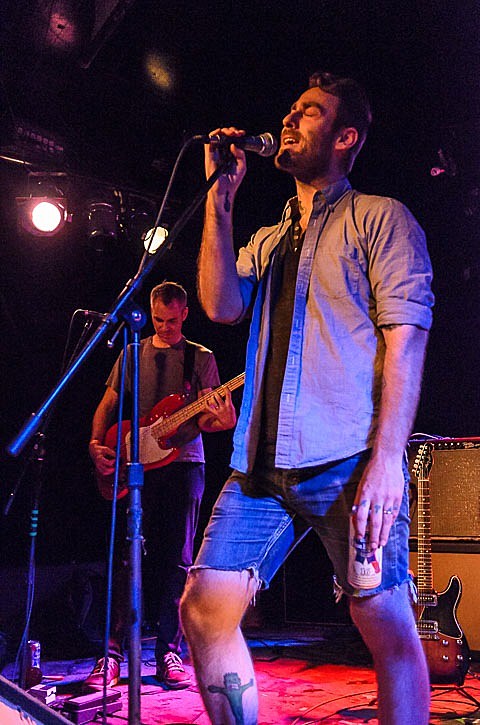 American Football, S. Carey @ Webster Hall
Emo legends American Football had a very brief career in the late '90s that only resulted in one album, one EP and a few shows, but in the time since then those few recordings have gone on to become very loved and highly influential on the current emo scene. Now they're finally back and tonight begins their three-night run at Webster Hall, all of which are sold out.

Allo Darlin, Sapphire Mansions @ Glasslands
Winsome, charming, and undeniably talented, seeing an Allo Darlin show is a sure way to lift your spirits -- even for the ukulele-phobes out there. Sapphire Mansions take their name (and maybe just a smidge of their sound) from a Felt song and are quality too.

Electric Six, Soft White Sixties @ Marlin Room at Webster Hall
Electric Six are essentially a one-joke band -- off the charts ego/bravado/innuendo over danceable rock -- who've managed to milk it across 11 albums. (Human Zoo is out next week.) Whether you had enough after "Danger! High Voltage!" or still dig the schtick, E6 are always a fun live show.

The Muffs, Upset, Miriam @ The Bell House (CBGB Festival)
The Muffs put out some killer (and often underrated) garage rock/pop punk in the '90s and now they're back with a new album on Burger that's on par with their prime-era material. Upset feature members of Hole and Vivian Girls and they're pretty likeminded to the Muffs, and Miriam is the new solo project of Norton Records co-founder/A-Bones drummer/singer Miriam Linna.

Yelle, Lemonade @ Irving Plaza
Despite the language barrier, Yelle scored a big club hit in the late '00s with "A cause des garçons" (Later used for the French people dancing SNL sketch). She just released her third album, Complètement Fou, featuring more of her effervescent Franco-synthpop.

Buke and Gase, Battle Trance, Palm @ Music Hall of Williamsburg
Buke and Gase make their own instruments and use them to create pretty eccentric sounds. Battle Trance count one of the former tUnE-yArDs sax players as a member, and they should be interesting too.

Code Orange, Twitching Tongues, Soul Search @ Palisades
Code Orange dropped the "Kids" from their name and went in a more alt-metal direction on this year's I Am King. Their shows are usually crazy and that should definitely be the case at the small Palisades.

Hiro Kone, Lace Curtain, Eaters, Negative Supply @ Silent Barn
While Mikey Young prefers not to leave Australia these days, the other half of Lace Curtain, David West, is bringing the band to the US for a short tour. Brookyn duo Eaters are on tour with them and make similarly proggy synthesizer music, mostly instrumental.

Citizen, You Blew It!, Slingshot Dakota, True Love @ The Studio at Webster Hall
Headliners Citizen make a melodic mix of post-hardcore and alternative rock, and they're joined by some cool openers like '90s-style emo devotees You Blew It! and the Mates of States-y keyboards/drums duo Slingshot Dakota.

Tom & Boot Boys, Anasazi, Aspects of War, Sad Boys, L.O.T.I.O.N., Primitive Pact @ The Acheron
Tokyo's Tom & Boot Boys are only playing two US shows this year, this being one of them. A handful of NYC's finest in punk and hardcore (and MA's Aspects of War) are on board to support.

Pat Benatar, Neil Giraldo @ Capitol Theatre
Pat Benatar's got no lack of '70s/'80s rock hits from "Heartbreaker" to "Hit Me with Your Best Shot" to "Love Is a Battlefield." We'll likely hear all of those and plenty more tonight.

Cast of Star Trek: TNG Moderated by William Shatner @ Manhattan Center Hammerstein Ballroom
Do you go to your local coffee shop and order "Tea. Earl Grey. Hot."? Then chances are you're already in line for this Comic Con Super Week event that reunites most of the TNG crew, Jonathan Frakes being the most conspicuous absentee. First gen captain William Shatner moderates, making this the first meeting of Picard and Kirk sense Star Trek: Generations. This is bound to go better than that.