Lifetime at Europa in 2012 (more by Rebecca Reed) 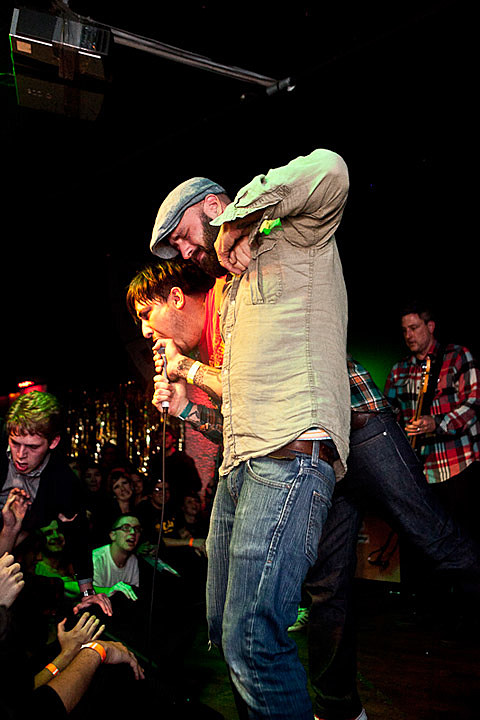 The Gizmos, Pampers, Lame Drivers, Milk Dick @ Union Pool
Bloomington, IN garage rock band The Gizmos existed for a few years and a few EPs in the late '70s. A reformed lineup just played Gonerfest and are in NYC for a show too. Also on the bill are Brooklyn's bruising Pampers, so this should be a fun show.

American Football, Into It. Over It. @ Webster Hall
Emo legends American Football had a very brief career in the late '90s that only resulted in one album, one EP and a few shows, but in the time since then those few recordings have gone on to become very loved and highly influential on the current emo scene. Now they're finally back and tonight is night 2 of their three-night run at Webster Hall, all of which are sold out.

Fleetwood Mac @ Prudential Center
With Christine McVie back in the band for the first time since the late '90s, this is the Fleetwood Mac most people want to see. Expect the return of songs like "Songbird" and "You Make Loving Fun" to the setlist.

Karate Kid screening and reunion! @ 92Y
Part of Comic Con's NY Super Week, this is a screening of '80s family classic, followed by a Q&A with cast members. Mr. Miyagi has passed on, but Daniel-san and "Sweep the Leg" Jonny (not to mention the guy who played his win-at-all-costs sensei) will be there.

The Muffs @ Asbury Lanes
The Muffs put out some killer (and often underrated) garage rock/pop punk in the '90s and now they're back with a new album on Burger that's on par with their prime-era material. They played NYC last night and tonight they're nearby in Asbury Park.

PC Worship, Whatever Brains, Shells, Shop Talk @ Death By Audio
PC Worship have been regulars on the local noise/avant-garde scene for years but this year they put out their most song-oriented rock album yet, and it shows they're pretty damn good at making this kind of stuff too.

Groundislava, Tha Yellow R. Kel, DJ Jester @ Glasslands
LA producer Groundislava is releasing a new album, Frozen Throne on Wedidit/Friends of Friends which follows his Feel The Heat EP from earlier this year. This is the release party.

Splashh, Regal Degal, The Johnnys @ Baby's All Right
UK band Splashh are here to beam bright, shoegazy vibes and maybe play some songs from their new LP which is due out early next year. Regal Degal make off-kilter art-rock, with a machinelike rhythm section.

Turnip King, Dinowalrus, Chimes, Adios Ghost, Gingerlys @ Friends and Lovers
North Brooklyn isn't the only place to see bands in the borough anymore. This is a Death by Audio-worthy lineup right in Crown Heights.

Chris Thile, Edgar Meyer @ Town Hall
Chris Thile never has a lack of things going on. Earlier this year he played shows as a member of the reunited Nickel Creek, he's still got the Punch Brothers plenty active, and now he has a new collaborative LP with Edgar Meyer called Bass & Mandolin (can you guess what instruments they recorded it with?). That duo teams up at Town Hall tonight.

Anais Mitchell, Dietrich Strause @ Rockwood Music Hall
Anais Mitchell may be best known in certain circles for Hadestown, her 2010 album which heavily featured Justin Vernon, but she had already been writing quality folk songs before that and she continues to. Her newest album, Xoa, came out this week and contains solo versions of some her older songs, including several from Hadestown.

Ceramics, Haybaby, Crazy Pills, We Ride On @ Cameo Gallery (CBGB Fest)
This CBGB Fest show has a lineup of mostly garage/grungy pop, and if you're hitting this one we especially recommend catching Haybaby and Crazy Pills.

X Japan @ Madison Square Garden
If you're still wondering who the hell's this band who can headline MSG, X Japan have been making rousing power metal with the over-the-top dress and hair of the visual kei scene since 1982, and they've got a crazed fan base all over the world.

If you'd rather go to the movies, we highly recommend Whiplash which stars JK Simmons as an obsessive music teacher at the best musical conservatory in the country who pushes a promising drummer to the edge of his potential. Mr. Holland's Opus it ain't. You can also catch Nas: Time is Illmatic at Nitehawk.