JEFF the Brotherhood in Chicago in 2013 (more by Kirstie Shanley) 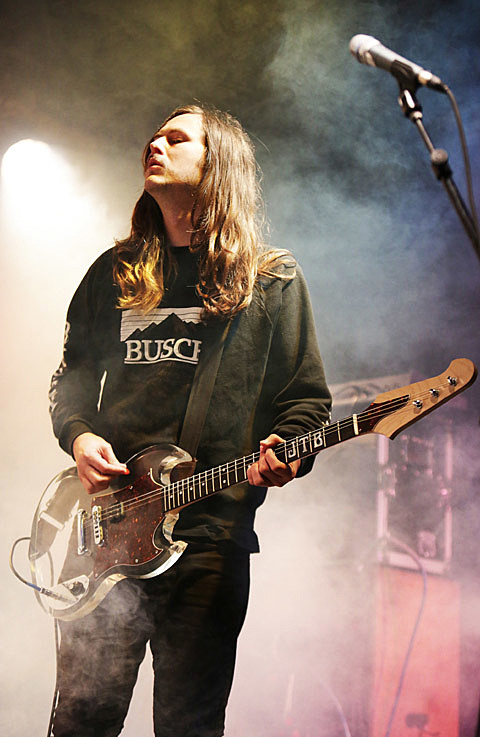 American Football, Matt Pond @ Webster Hall
Emo legends American Football had a very brief career in the late '90s that only resulted in one album, one EP and a few shows, but in the time since then those few recordings have gone on to become very loved and highly influential on the current emo scene. Now they're finally back and tonight concludes their three-night run at Webster Hall, all of which are sold out.

JEFF The Brotherhood, Diarrhea Planet, Scully, Punani Huntah @ Death by Audio
Few out-of-town bands are as synonymous with Death by Audio as Nashville's JEFF the Brotherhood and few band's shows are as crazy as their's are there. It's been JEFF's home away from home. Jake and Jamin never fail to bring it, four-on-the-floor, face-melting power jams that drive like a brakeless trucker on steep incline, and with the venue closing next month, this show is even more unmissable. If you got tickets, that is -- this one's sold out. JEFF and equally exciting tourmates Diarrhea Planet will be at Santos on Monday.

Jane's Addiction, Robert DeLong, Devo, Surfer Blood, We Are Scientists, Cheeky Parade @ Times Square (CBGB Fest)
CBGB Fest is mostly smaller shows, but they've got this big one which also happens to be free. It starts at noon with Devo going on at 4 PM and Jane's at 6:15, so you can see two great veteran bands before heading somewhere else for the night.

Today is the Day, Lord Mantis, Cleanteeth, Swollen Organs @ Acheron
Longrunning noisecore rippers Today Is The Day will release their tenth album this week, and we'll likely hear a good chunk of that at tonight's show. Support comes from their tourmates, Chicago's blackened sludgers Lord Mantis (who also have a new album out this year), as well as Goes Cube/Hull-related sludge band Cleanteeth and harsh noise/PE project Swollen Organs.

Generationals, Arum Rae @ Music Hall of WIlliamsburg
Generationals have a new LP out on Polyvinyl which is more of their upbeat indie pop. Tonight their tour in support of it hits NYC.

The Soft Batch, Coup Sauvage and the Snips, Gauzy (ex-Tayisha Busay), Max Steele @ Cake Shop
The Soft Batch is a collaborative project from JD Samson of MEN and Le Tigre and Tami Hart of MEN's past billmates and Kathleen Hanna tributers Making Friendz. See what they have in store at Cake Shop tonight.