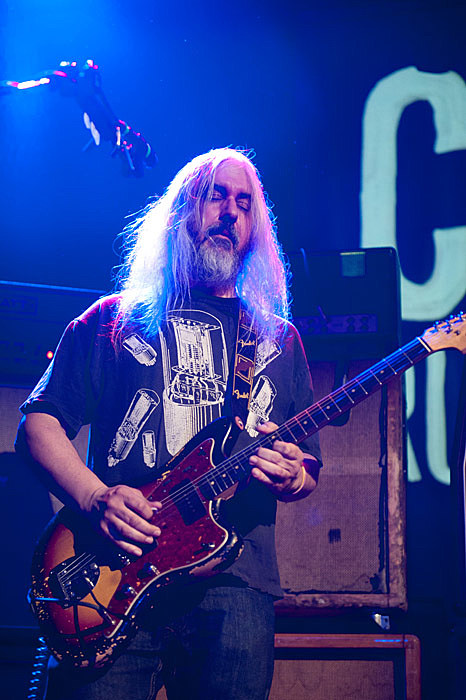 J Mascis, Luluc @ Bowery Ballroom
J Mascis may be most loved for shredding in Dinosaur Jr, but his mostly-acoustic solo material is great too and he still rips out the guitar solos at these shows too.

Porches, Frankie Cosmos, Regal Degal, Rivergazer @ Baby's All Right
Porches go in a synthy new direction on their new single for Terrible Records, and tonight's show is all in the family with Frankie Cosmos (the project of Greta Kline who's in Porches that also features Porches singer Aaron Maine on drums) and Rivergazer (the project of Kevin Farrant who's also in Porches). Regal Degal aren't in the family but they're worth catching too.

Wampire, TOPS @ Baby's All Right
Wampire's brand of indiepop has a strong streak of yacht rock running through it (hey, isn't that a Gerry Rafferty song?) without actually setting sail; TOPS do to similarly and have gotten quite good in the last year (single "Way to Be Loved" is pretty irresistible).  Both bands will be around for CMJ too.

Drive-By Truckers, St. Paul and The Broken Bones @ Beacon Theatre
Drive-By-Truckers have been on the road for a while now, having hauled their tenth album, English Oceans, earlier this year. This ain't no truck-stop, though, it's a show at one of NYC's classiest venues.

Arto Lindsay, Guardian Alien @ Le Poisson Rouge
Arto Linsay is a veteran of the no wave scene, having been in the seminal band DNA, and he's also an excellent experimental composer, a collaborator of David Byrne, John Zorn and more. Solid support tonight comes from Guardian Alien, the project of Liturgy's wild drummer Greg Fox.

Minus the Bear, O'Brother @ Gramercy Theatre
For Minus the Bear's current tour, they're celebrating both a new compilation with b-sides from their past few releases and the tenth anniversary of the excellent They Make Beer Commercials Like This EP from their prime early 2000s era. So it'll be a good mix of the old favorites and some of the lesser heard stuff.

Har Mar Superstar, The Pizza Underground, Candy Boys, Nowhere @ Knitting Factory
Hope you like extra cheese, 'cause you're gonna get it tonight as Har Mar and The Pizza Underground's tour has returned to NYC. While PU's schtick has gotten cold, Har Mar's '80s-style funk-pop is generally a good time.

Agent Orange, The Architects @ Santos Party House
Agent Orange's only original member is frontman Mike Palm, but with an album that lives up as well as 1981's Living In Darkness, they're still worth checking out.

Jimmy Eat World, Minibosses @ Capitol Theatre
While Jimmy Eat World already toured their most classic album (1999's Clarity) for its tenth anniversary, they're now on the road giving the 10-years treatment to Futures which was the followup to their mainstream breakthrough and featured stranger moments than you might have expected from post-"The Middle" Jimmy Eat World.

Judas Priest, Steel Panther @ Izod Center
Heavy metal legends Judas Priest released their 17th album in 44 years this year. It had some classsic-sounding Priest on there and sometimes that's all you can ask for. Of course, they've got tons major classics to play tonight too and we'll surely hear plenty of those.

We're Ghosts Now, Bo Ningen, Public Access T.V., Amigos Amigos, Hey Anna @ The Wonder Bar
Wuxia rock practitioners Bo Ningen were performing their high-flying musical acrobatics here in NYC not that long ago and are not to be missed. Amidst a second round of NYC dates, they hit Jersey tonight.

Hatsune Miku @ Hammerstein Ballroom
Comic Con was last weekend but surely this woulda fit right in, a computer-generated Japanese hologram singer (with synthesized voice) playing with a live band. No, really. Check out "her" appearance on Letterman, below.

Black Milk (w/ live band), Wara from the NBHD, AB, Azad Right @ The Studio at Webster Hall
Detroit rapper Black Milk has a new album coming later this month, and tonight he's in NYC with a full band and will hopefully be previewing some new songs.

Rosetta, So Hideous, White Widows Pact, Tiger Flowers @ Saint Vitus
Philly post-metallers Rosetta put out a new EP this week and tonight they're in NYC with guitarist Eric Jernigan from City of Ships joining them. So Hideous and Tiger Flowers make for solid and likeminded local support.