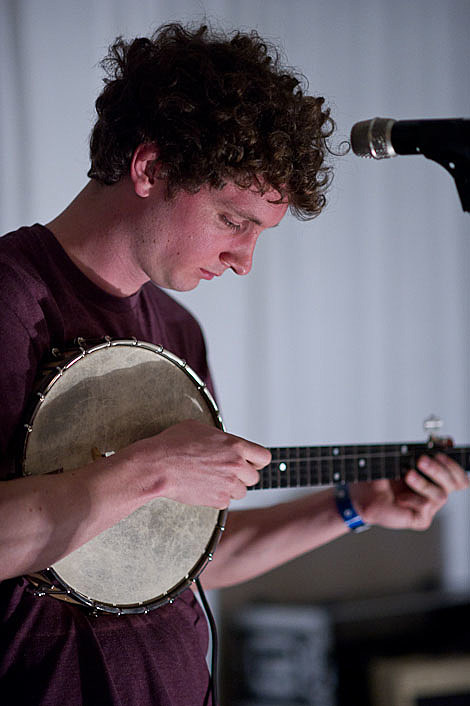 Sam Amidon, Bill Frisell, Shahzad Ismaily, Cy Dune @ Music Hall of Williamsburg
Sam Amidon just released Lily-O, an album of reimagined folk songs featuring jazz legend and Bill Frisell on guitar, as well as frequent collaborators Shahzad Ismaily (he and Sam are both in Doveman's band). Those three will be playing together tonight as well.

Fat White Family, Jeffrey Lewis @ Bowery Ballroom
The wild, debauched world of Fat White Family returns to NYC after leaving their stink all over the place back in March. The band's new single, "I Am Mark E. Smith" lays influences pretty clear and is good in its own right (stream it below).

Xiu Xiu, Yvette @ Glasslands
Jamie Stewart's experimental, confrontational music as Xiu Xiu maybe be too much for some people, but it is never boring. Catch him tonight with very intense locals, Yvette.

Frankie Cosmos, Porches, No One and the Somebodies, Eskimeaux @ Baby's All Right
It's the second night of related bands Frankie Cosmos and Porches' two-night run at Baby's and this time Frankie headlines. Like last night, it's another all-in-the-family show, this time with Eskimeaux (aka Gabby Smith of Frankie Cosmos' band).

Pond, Doctopus, Fascinator @ Rough Trade
They may share members/ex-members with Tame Impala, but don't call Pond a side project. Some would argue they're better at the psych-rock game. (We like them both.) We're not sure when Pond's new album, Man, It Feels Like Space Again, will actually be released (it was supposed to be already) but you can probably catch songs from it tonight.

Ben Frost, Julianna Barwick, Oneirogen @ The Wick
Avant-garde composer Ben Frost released new album, A U R O R A, earlier this year and, like his previous work, it's ambient but you'd be hard pressed to call it mellow. There's a lot of tension here, which cracks open into bursts of noise. Tonight's well-curated show is the first in Pitchfork's new "Tinitus" series. You might want to consider earplugs.

Amon Amarth, Sabaton, Vallenfyre @ Best Buy Theater
Swedish viking metal band Amon Amarth and Swedish power metal band Sabaton's tour hits NYC tonight, and this is a special night on the tour with support from Vallenfyre, the death/doom supergroup with members of At the Gates, Paradise Lost, My Dying Bride and Extinction of Mankind.

Skeletonwitch, Black Anvil, Evoken @ Saint Vitus
Party metallers Skeletonwitch have been on the Amon Amarth/Sabaton tour themselves, but tonight they're taking the chance to headline their own show at the smaller Saint Vitus. Tonight's with NYC black metal crew Black Anvil and funeral doomers Evoken.

The Soupcans, Slutever, Girlpool, Pink Wash @ Death By Audio
This is a great bill all around with Toronto's ripping Soupcans, two LA duos Slutever and Girlpool (currently on tour with each other), and Bleeding Rainbow/Hume-related Pink Wash.

Rakta, S.H.I.T., Survival, Mommy @ Palisades
This is the second of two NYC shows this week for Brazil's Rakta who play a loud, raw mix of gothy post-punk and tripped out psychedelic rock.

The Empty Hearts, Party Lights @ Knitting Factory
The Empty Hearts are the supergroup of Blondie's Clem Burke, The Cars' Elliot Easton, The Romantics' Wally Palmer and Chesterfield Kings' Andy Babiuk. As you may expect from a lineup like that, it's late '70s-style power pop.

Bill Cosby @ The Paramount
Comedy legend and fancy sweater lover Bill Cosby has gotten a little preachy with age but is still a funny guy. One of the greats. He'll do two performance tonight.

Blue Oyster Cult @ The Space at Westbury
Hard rock veterans Blue Oyster Cult's influence is undeniable and they have no lack of great tunes to pull from at tonight's show on their hometown of Long Island.