Obits at Union Pool in 2011 (more by Fred Pessaro) 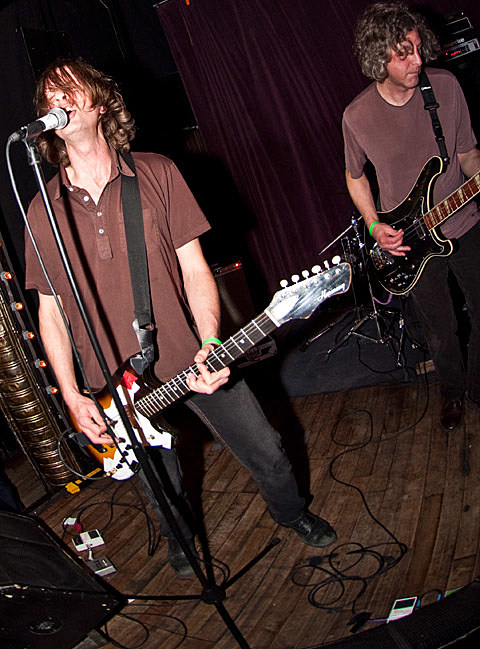 Because of CMJ, we're doing 'What's Going On' slightly different this week. Each day there's a handful of day shows which are listed first, followed by the night shows. With so many events happening each day, we've limited this to our top picks, but there's a list of other good ones below the fold. And for even more of tonight's shows, you can browse our full NYC show calendar.

Widowspeak, Juan Wauters, Dinner, Homeshake, Mega Bog, Alex Calder, Girl Tears @ Baby's All Right
Captured Tracks has rounded up many of its acts for this day party, including Widowspeak who are playing their only CMJ today. FREE.

Purling Hiss, Mainland, Palehound, Amanda X, Rivergazer, The Kickback, Prettiots, Whiskey Bitches, Beach Day @ Cake Shop
This is NYC Taper's annual day party at Cake Shop, with a good lineup of American indie rock, including Philly's loud, awesome Purling Hiss. If you can't make it (or want to have a document of being there), recordings of all the sets will be on his site soon after. FREE. 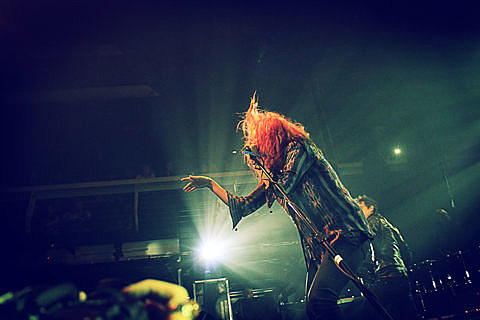 The Kills, Moon Duo, Nuns, Slothrust @ Bowery Ballroom
This is a VERY intimate show for The Kills, and naturally it's sold out but maybe if you have a badge and get there super early you'll get in. If you are going, don't miss psych rockers Moon Duo.

Beach Fossils, Small Black, Wardell, Fiance @ Brooklyn Bowl
Beach Fossils might now have the cool cache they had a couple years ago, but they remain an engaging, exciting live band. This show is free with CMJ badge or RSVP. $12 at the door.

The Paperhead, Doug Tuttle, Ultimate Painting, The Estrogen Highs, Negative Scanner @ Cake Shop
One of the most reliable small labels in the country, Chicago's Trouble in Mind has an incredible roster of psych, garage and krauty bands. Catch some of them -- including Nashville's The Paperhead, CT's noisy Estrogen Highs, and Veronica Falls offshoot Ultimate Painting -- all in one place. Also: the full Trouble in Mind merch table will be on hand, including rarities, limited edition colored vinyl and other stuff.

Hamish Anderson, The Ocean Party, Bad//Dreems, The Prettiots, Dreamers, Mainland, Gulp @ DROM
This is the only CMJ show for Gulp, the band featuring Guto Pryce (bassist for Super Furry Animals). If you like tropicalia, krautrock and spaceage bachelor pad music (and Super Furry Animals), you'll wanna be at their 6:45 performance.

Mac McCaughan (of Superchunk), J Fernandez @ HiFi Bar
Mac's been making a habit out of playing solo shows at CMJ, this being the third in a row that he does it. It's just him and an electric guitar, but he otherwise plays a bunch of Superchunk songs and it's a cool thing to experience.

Obits, Protomartyr, Lee Bains III & The Glory Fires, Gem Club, S, Luluc @ Knitting Factory
This is the Sub Pop / Hardly Art showcase and is the glue that holds this otherwise disparate bill together. Go early for the gentler bands, including S, the current project of Former Carissa's Weird singer Jenn Ghetto; get there late for Obit's only CMJ show and Detroit's fiery Protomartyr.

Alkaline Trio, frnkiero andthe cellabration @ Music Hall of Williamsburg
Grim but melodic punks Alkaline Trio have eight records ranging from pretty good to pretty great, and they'll be playing two in full at each night of this 4-night run at MHOW (it won't be announced which albums are which night). This is night 3, and though all four shows fall during CMJ, they're not part of the fest.

The Bad Plus, Joshua Light Show / Glasser, Joshua Light Show @ NYU Skirball Center
Using old-school psychedelic "liquid light" projections, Joshua Light Show has been bringing a visual element to pop music since the mid'60s and his team do incredible things. This three-day festival starts tonight with an early show featuring The Bad Plus performing Ornette Coleman's Science Fiction and a late show with Glasser. Not part of CMJ.

Fort Lean, Seoul, The Great Void, Rioux, TOMBOY, Doprah, YAWN, Zula @ Lot 45
This is the Out in the Streets Festival's CMJ show which was originally supposed to be at Radio Bushwick. It's a solid lineup, with Montreal's lush synthpop practitioners SEOUL one of the highlights.

PC Worship, Future Punx, Eaters, Beth Israel, B-Boys @ Silent Barn
Dull Tools, the label Parquet Courts' Andrew Savage and Future Punx's Chris Pickering, is throwing this party tonight with most of their excellent roster, including two of our 10 NYC Bands to See at CMJ, plus synth duo Eaters, Austin postpunks Beth Israel and B Boys. Maybe some surprises too. This will be a fun show.

Christian Finnegan, Seth Herzog, Damien Lemon, Dan Soder, Michelle Wolf, The Amigos Band @ Bell House
This is a benefit for the continued -- and much needed -- relief aid to folks ravaged by Hurricane Sandy. It's a great comedy lineup with a few surprise guests promised as well.

Gerard Way @ Webster Hall
The former My Chemical Romance frontman ditches the gothed-out stadium pop punk of his former band on his debut solo album, Hesitant Alien, which instead pulls heavily from '90s Britpop. Whether or not you were an MCR fan, it's worth checking out. This is his second of two NYC shows, and it's an official CMJ show.

Lloyd Cole @ City Winery
Having made swoony, literate guitar pop with The Commotions in the '80s and solo since the '90s, Lloyd Cole remains a suave talent whose banter entertains as well.

BrooklynVegan will be at Baby's All Right for CMJ again this year with a Friday day party, a Saturday day party (lineup TBA very soon!) and an official Saturday night show.

More of today's options below...