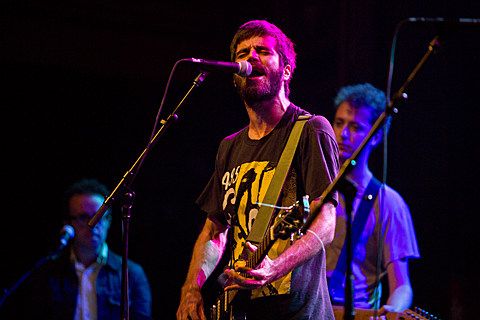 Because of CMJ, we're doing 'What's Going On' slightly different this week. Each day there's a handful of day shows which are listed first, followed by the night shows. With so many events happening each day, we've limited this to our top picks, but there's a list of other good ones below the fold. And for even more of tonight's shows, you can browse our full NYC show calendar.

Paperhead, Ultimate Painting, Doug Tuttle, The Estrogen Highs, Negative Scanner @ Rough Trade
One of the most reliable small labels in the country, Chicago's Trouble in Mind has an incredible roster of psych, garage, postpunk and krauty bands. Catch some of them -- including Nashville's The Paperhead, CT's noisy Estrogen Highs, and Veronica Falls offshoot Ultimate Painting and the Wipers-esque Negative Scanner -- all in one place. Also: the full Trouble in Mind merch table will be on hand, including rarities, limited edition colored vinyl and other cool stuff. Also also: free show.

Krill, Grass Is Green, Two Inch Astronaut, Ovlov (acoustic), Roomrunner, Geronimo!, Broken Water, Pile (acoustic), Palehound, Ronald Paris (of Porches), Kal Marks, Gnarwhal, Meat Wave, My Dad @ Silent Barn
If you've been to an Exploding In Sound party before, you know every band goes hard and the fans reciprocate. We said it about Exploding In Sound's official showcase yesterday, and their all day and night (2:30 PM - 1:30 AM) unofficial show may get even crazier. $8 at the door, no badges.

TOPS (DJ Set), Blue Hawaii (DJ Set), Erika Spring (DJ Set), Lil Internet (DJ Set), No Excuses (DJ Set), Wildarms (DJ Set) @ Wythe Hotel
For those needing a break from seeing live music but still want to do something CMJ-y, Montreal's Arbutus Records and NYC/Paris label Cascine are throwing this chilled-out party at The Wythe Hotel's rooftop bar with many of their artists DJing. If nothing else it's an amazing view. 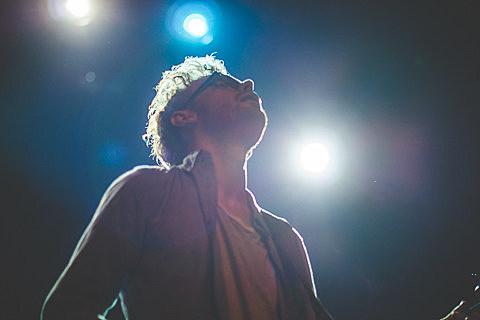 The Jazz June, Pity Sex, Beach Slang, Cayetana, Sport @ Baby's All Right (official BrooklynVegan showcase)
This is our official BrooklynVegan showcase and there's not a band we're not excited about (if we do say so ourselves). Headlining is The Jazz June, the '90s-era emo band who are returning with their first album in 12 years and the singles we've heard from it sound like they're still in great form. Before that it's punky shoegazers Pity Sex who are co-headlining, ex-Weston rockers Beach Slang whose two EPs are all ringing guitars and endlessly relatable lyrics, the new-ish indie rock trio Cayetana who's promising debut is out now, and Sport who hail from France but have a ripping emo-y punk sound that sounds straight out of Philly or Chicago. Tickets are still available and a limited amount of badges will be accepted. Hope to see you there!

Slowdive, Low @ Terminal 5
Slowdive are more popular now than they were in the '90s, and apparently better live too. Terminal 5 is not our most favorite venue ever but we're hoping those thoughts wash away with "Alison" and other shoegaze favorites.

DJ Dodger Stadium (Samo Sound Boy Jerome LOL), Casual Sex,, Blue Hawaii, Adult Jazz, Aurora, Nothing But Thieves @ Brooklyn Bowl
While Samo Sound Boy and Jerome LOL have been impressive on their own, they're even better as the collaborative duo DJ Dodger Stadium. If nothing else, DJDS dropped one of the most infectious dance tracks of the year with "Love Songs."

Potty Mouth, Cold Fur, Girl Tears, Girlpool, Dead Stars, Sex Jams, Heliotropes, Yawn @ Cake Shop
This is the Old Flame showcase and it's got a great lineup of mostly punk, indie rock, or the thin line between the two. Potty Mouth are always a good time, Girlpool have a good amount of hype behind them right now, and Sex Jams are here all the way from Vienna.

Holly Jolloween Drone Marathon @ 'The Ranch' at Death by Audio
To kick off the last month of shows at Death by Audio, they're throwing a 24-hour drone marathon in the adjacent loft space (door is just to the right of DbA on S2nd) starting at 7 PM tonight and going through 7 PM Sunday. Among the musicians involved will be Will Sheff, Greg Fox, Excepter, Oliver Ackerman (A Place to Bury Strangers), and Travis Johnson (Grooms). It's free, stop by!

Protomartyr @ Cake Shop
Protomartyr play this late afternoon / early evening free show at Cake Shop. Protomartyr aren't playing big rooms yet, but it will still be a thrill to see them up-close-and-personal they way Cake Shop can. Look out for some killer new songs in the setlist too.

The Muscadettes, The Grizzled Mighty, Burning Palms, Pageantry, Duquette Johnston, Tom West @ Fat Baby
We only ever seem to remember LES club Fat Baby exists during CMJ. It's not a bad little room and seeing a band like Montreal's punky/new wave-ish band The Muscadettes could be fun here.

Dead Stars, EULA, Radical Dads, The Teen Age, Crazy Pills, pow wow!, The Meaning of Life @ Leftfield
Leftfield is another venue you don't hear much about except during festivals. Tonight's a great lineup of local indie rock, especially if your definition of that aims square at 1994. (Dead Stars and Radical Dads, we're looking at you.)

Hank Wood and the Hammerheads, Blazing Eye, Savageheads, L.O.T.I.O.N., Face The Rail, Ivy @ Palisades
This isn't a CMJ show (only $12 though), but especially if you're in from out of town, it's a great opportunity to see one of NYC's best local punk bands, Hank Wood and the Hammerheads. Their organ-fueled sound pulls equally from early hardcore as it does from early garage rock, and the live show is really where it's at.

Splashh, Native America, Little Racer, Orchestra of Spheres, Roman a Clef, The Love Supreme, Future Punx @ Pianos
Roman a Clef os Ryan Newmyer and Jen Goma of A Sunny Day in Glasgow with Kurt from Ice Choir producing. It sounds like a more ethereal Prefab Sprout. They're pretty new, could be cool, who knows what it like live? Also, we're fans of Future Punx. Definitely worth swinging by Pianos if you're in the Lower East Side tonight.

A Place to Bury Strangers, Moon Duo (members of Wooden Shjips), King Gizzard and The Lizard Wizard, Wampire, Bo Ningen, Prince Rama, Spires, The Wytches, Paperhead, Young Magic @ Rough Trade
Right after the Trouble in Mind party, Rough Trade has the Austin Psych Fest showcase which should seamlessly transition. It's a pretty incredible lineup of bands and goes till laaaate.

Eddie and The Hot Rods, Daddy Long Legs, The A-Bones, The Bloodshots @ Bowery Electric
Eddie and the Hot Rods put out a few punk/pub rock classics in the late '70s, and tonight singer Barrie Masters' current version of the group hits Bowery Electric with great support: Norton Records garage rock vets The A-Bones, Daddy Long Legs (no strangers to the Norton scene themselves), and rockabilly band The Bloodshots.

Misfits,Private Instigators, A Midnight Tragedy, Dispute to Flames, The Zombie Mafia @ Starland Ballroom
While Danzig is busy with his Samhain reunion and will be here soon, Jerry Only's version of the Misfits play their annual NY/NJ Halloween shows this month. NYC is on the 28th but tonight they're in their home state at Starland Ballroom.

BrooklynVegan will be at Baby's All Right for CMJ again this year with a day party today and an official night show.

More of today's options below...