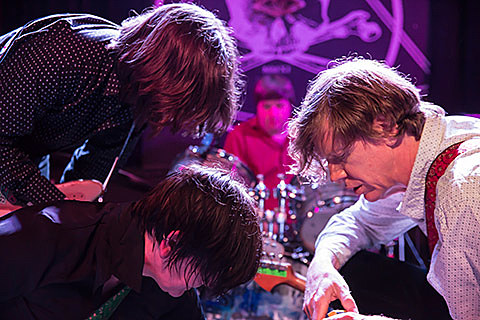 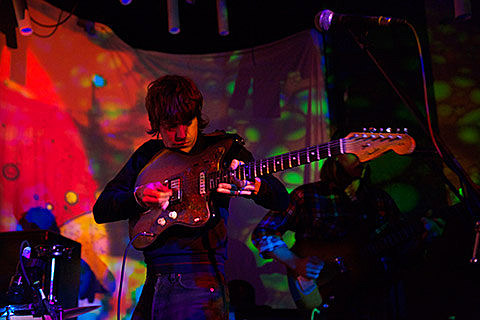 King Gizzard and The Lizard Wizard, Juan Wauters, Tiny Ruins, Guy Blakeslee (of Entrance Band), Christian Peslak (Saint Rich & Delicate Steve), White Fence @ Baby's All Right
If you don't want CMJ to end, here's one more chance to catch King Gizzard, White Fence and more for this "hangover brunch." Most of the sets will be stripped-down or acoustic, and many of them will be in the main and side bars of Baby's. Free. Also: Baby's build-your-own blood mary bar is pretty sweet.

The Thurston Moore Band, PCPC (mbrs of PC Worship + Parquet Courts) @ Rough Trade
Thurston Moore's new band/album (which includes Sonic Youth drummer Steve Shelley and My Bloody Valentine's Deb Googe on bass) is the most Sonic Youth-style thing he's done since The Eternal and it's good stuff. PCPC, the new band with members of Parquet Courts and PC Worship, also sound a lot like Sonic Youth and they do it well.

Dark Blue @ Rough Trade (2 PM, free)
If you're awake and not too hungover from CMJ, this is a good afternoon option to keep the fun going. Dark Blue is the new-ish post-punk band with members of Clockcleaner and Paint It Black, and today they'll be joined on drums by Sean McGuinness from Pissed Jeans/Rat Fist.

Boysetsfire, Tim Barry, War on Women, Unwed @ Saint Vitus
Melodic hardcore vets Boysetsfire have been back since reuniting in 2010, and their current tour is in celebration of their 20th anniversary as a band. They'll be performing 2000's After the Eulogy in full tonight. All good openers too.

SBTRKT, GoldLink @ Terminal 5
SBTRKT's new album doesn't have as many bangers as his last, but hopefully he'll still get the place moving tonight. Night 1 of 2.

Holly Jolloween Drone Marathon @ 'The Ranch' at Death by Audio
Meanwhile...to kick off the last month of shows at Death by Audio, they're throwing a 24-hour drone marathon in the adjacent loft space (door is just to the right of DbA on S2nd) which started Saturday and goes through 7 PM tonight. Among the musicians involved will be Will Sheff, Greg Fox, Excepter, Oliver Ackerman (A Place to Bury Strangers), and Travis Johnson (Grooms). It's free.

Digitalism, Elliot Moss @ Music Hall of Williamsburg
German electronic duo Digitalsm haven't had a new album since 2011's I Love You Dude, but returned this summer with new single "Wolves" which features Youngblood Hawke. You can fill the void of new music by seeing them live tonight.