Jeff Tweedy of Wilco in Austin (more by Tim Griffin) 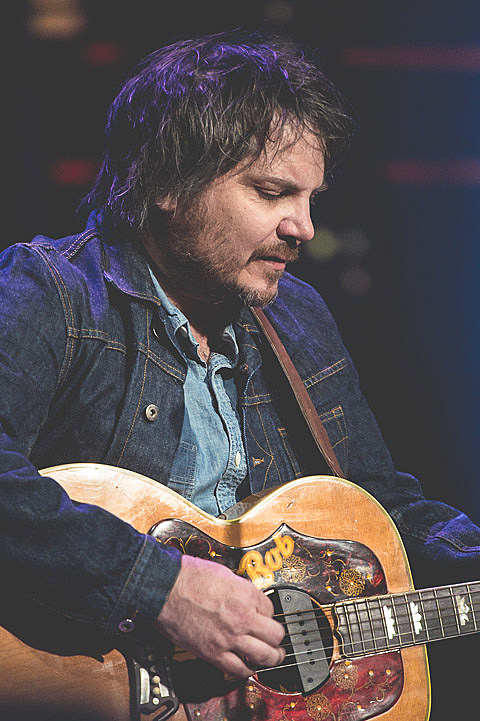 Wilco @ The Capitol Theatre
Though Jeff Tweedy and his son just released their terrific Tweedy album, the Wilco train rarely stops rolling, and tonight is on night 2 of its first of three shows at The Cap'. It's a lovely room and tickets are still available.

Pianos Become The Teeth, Gates, Frameworks @ The Studio at Webster Hall
Pianos Become the Teeth stopped screaming on their new album, but they didn't stop writing intense music -- quite the opposite, this is some of their best material yet. Tonight's the NYC release show and there's quality support too.

Weyes Blood, Tonstartssbandht, King Cyst, DJ Joshy @ Glasslands
Weyes Blood's new album is out now, and it's a good one but her powerhouse vocals really come across in a live setting. This whole bill is good too, with experimentalists Tonstartssbandht and King Cyst, the psychedelic project of Big Troubles' Luka Usmiani. Drippy Eye Projections will be there to provide just the right kind of visuals for this lineup.

PC Worship, Ashcan Orchestra, Mario Diaz De Leon, Hair Jail, Mister Matthews @ Trans-Pecos
PC Worship have been regulars on the noise scene in Brooklyn for a while now, but their new album is their most song-oriented (and possibly best) stuff yet. They've had a busy year, and any chance to catch them is a good one.

Motion Studies (as Prince), Sunflower Bean (as Smashing Pumpkins), Dances (as The Strokes), Haybaby (as Yeah Yeah Yeahs), Scherzo (as DFA 1979) @ Baby's All Right
One thing Halloween always means in the music world is cover shows galore, and Baby's is getting an early start by throwing one tonight.

Anoraak (live), Alan Blancato, In The Night @ Cameo
College and Electric Youth will both be here separately in the the next month, and tonight you can catch the remaining third of 2012's Drive tour, Anoraak (who's also a College collaborator), playing a live set at Cameo.

The Memories @ Cake Shop
Portland, OR duo of Erik Gage and Kyle Handley (who are both in White Fang too) write songs mainly about girls and getting high, the two pillars of rock n' roll -- though The Memories fall more on the lo-fi pop end of the spectrum.

Purling Hiss, Meatbodies, Yonatan Gat, Dream Police @ Death by Audio
Philadelphia's Purling Hiss make classic"-style indie rock, with fuzzy guitars and big hooks, and an affinity for Neil Young style jams (and volume). Also on the bill are Meatbodies, whose main man is Chad Ubovich (of Mikal Cronin's band) and who make crunchy jams in the general Ty/Ohsees idiom. Plus former Monotonix man Yonatan Gat, and a Men side project Dream Police open. This will be a good show to see at DbA.

Jon Langford @ The Bell House
Following the sold-out premiere of documentary Revenge of The Mekons at Film Forum is this afterparty featuring Mekons frontman Langford.

Brother Ali, Bambu, DJ Last Word @ Knitting Factory
Conscious rapper Brother Ali doesn't have any new records to support this time around, but he's got over a decade of standout material to pull from.