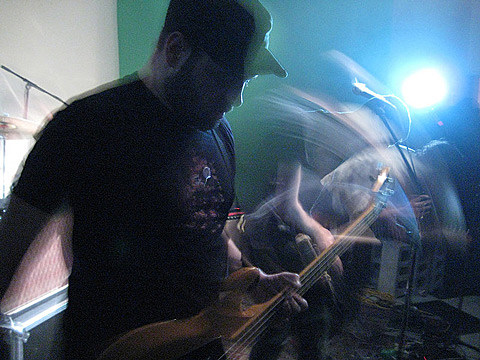 You can browse our full NYC show calendar and our 2014 Halloween Weekend guide for more of tonight's shows, but here are some highlights.

Samhain, Goatwhore, Midnight @ Best Buy Theater
Samhain, the band Danzig led between the Misfits and his eponymous band, are reunited this year and they finally come to NYC on... the night of Samhain. The reunion lineup includes Glenn, plus Baroness guitarist Peter Adams and Danzig Legacy members London May and Steve Zing (no Eerie Von). Danzig Legacy has played Samhain material before, but it's a treat to see a whole night dedicated to it. Plus there's excellent support tonight from blackened death metallers Goatwhore and speed metallers Midnight.

Dirty on Purpose, Sisters, French Miami, Darlings @ Death By Audio
Some of the bands that one called Death by Audio home are reuniting for this show that kicks off DbA's final month. Headliners Dirty on Purpose, who were one of Brooklyn's more underrated bands of the '00s, will be playing their first show since 2008.

David Bazan (w/ Passenger String Quartet), David Dondero @ Bowery Ballroom
Over the years David Bazan has fronted Pedro the Lion, Headphones and put out solo material (and still other projects too). For his new album, he's re-worked material from those three with a string quartet and tonight David and the quartet will bring those re-workings to life.

Yellowbirds, Mesiko, Steve Salett @ Baby's All Right
Sam Cohen's Yellowbirds project is coming to an end, but not before playing one last show tonight.

Pentagram, Blood Ceremony, Kings Destroy @ Gramercy Theatre
It's been a great year for doom metal, so even though it's been a while since a new Pentagram album, it's perfect timing to welcome these veterans who have been putting out tremendous doom since the '70s. The witchy flute-filled Blood Ceremony are a newer band who do a lot of justice to trad-doom, and locals Kings Destroy fit the bill well too.

Speedy Ortiz, Ex Hex, Aye Nako @ Glasslands
The excellent double-billed tour of Speedy Ortiz and Ex Hex lands in NYC for its first of two nights tonight. Speedy makes '90s-style indie rock that owes at least a little to some of Mary Timony's past bands (like Helium), and Timony's current band Ex Hex take the swaggering glam and power pop of the late '70s / early '80s and make it their own. Local openers Aye Nako are a good match and not to be missed.

The Dean Ween Group @ Brooklyn Bowl
While Gene has reverted by to his given name, Dean Ween carries on with his stage name and makes music in pretty much the same vein as he did with Ween.

Las Rosas, Lace Curtains, The Moon Dudes @ Union Pool
This is the record release party for Lace Curtains' second album, A Signed Piece Of Paper, which came out this past week. The album has some indie rock a la Michael Coomers' old band Harlem but there's a strong '70s singer-songwriter vibe to it as well. Las Rosas headline and made superior surfy garage pop.

The So So Glos, Slothrust, Dinowalrus, Weird Womb, DJ Lady Guy @ Brooklyn Night Bazaar
It's the second night of Halloween weekend at BK Night Bazaar and this one's got a lineup of local guitar rock bands.

Preservation Hall Jazz Band, Allen Toussaint @ Music Hall of Williamsburg
While most of his best-known songs were made famous by other performers, producer, arranger, hitmaker and general New Orleans living legend Allen Toussaint in no small way helped shape not only the sound of that city's R&B scene but of rock n' roll and pop music in general. Tonight he teems up with the equally legendary New Orleans neighbors Preservation Hall Jazz Band for what will surely be a fine evenign of music.

Psychemagik, Nikola Baytala @ Output's Panther Room
UK Psychemagik make similar to synth-funk to Daft Punk and Justice, and they're also known for great remixes too, like their one of Fleetwood Mac's "Dreams."

The Damned, TSOL @ Stone Pony
While it's not quite as exciting as seeing them on Halloween, The Damned are still one of the best original UK punk bands with a list of classics as long as your arm. While we miss having powerhouse drummer Rat Scabies on the kit, frontman Dave Vanian and guitarist Captain Sensible certianly keep the Damned flag flying respectably.

Phil Lesh & Friends @ Capitol Theatre
Phil Lesh & Friends' never-ending residency at the Cap continues tonight with another set sure to be chock full of Grateful Dead favorites. Dead Heads already know this, but even if you're a casual fan, Phil & Friends are worth seeing.

Milagres (as Queens of the Stone Age), Year of the Dragon (as Misfits), The Finks (as The Velvet Underground), The Live Ones (as Hank Williams), Alien Trilogy (as Devo), Nice Apt. (as Spacemen 3) @ The Gutter
Most of the cover shows went on last night, but if you've still got that desire left in you, there's another at The Gutter tonight.