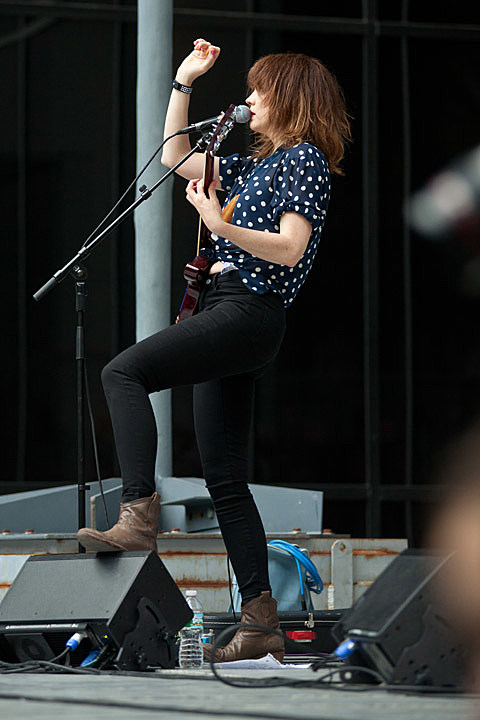 Secret Guest, Father Murphy, Dan Friel, Palberta @ Death by Audio
We don't know who tonight's secret guest is (DbA has offered a hint "theres gonna be FOOD HERE!") but it's officially three weeks left of Williamsburg's longest-running DIY venues and they've promised to go out with a bang. The announced bill is pretty cool already, loaded with interesting experimental-leaning acts.

Ex Hex, Speedy Ortiz, Big Ups @ Mercury Lounge
The excellent double-billed tour of Speedy Ortiz and Ex Hex wraps up its 2-night run in NYC tonight. Speedy makes '90s-style indie rock that owes at least a little to some of Mary Timony's past bands (like Helium), and Timony's current band Ex Hex take the swaggering glam and power pop of the late '70s / early '80s and make it their own. Local openers Big Ups make post-hardcore indebted to Slint and Fugazi, and they're not to be missed.

Pussy Riot @ MoMA PS1
Pussy Riot members members Masha Alekhina, Nadya Tolokonnikova and Petya Verzilo will be in conversation with vMoMA PS1 director Klaus Biesenbach " focused on the current culture of political oppression within some national and international governments and how it is being addressed by artists worldwide." Presented in conjunction with the 'Zero Tolerance' exhibition.

Roya, Ziemba, Alice Cohen, Glockabelle, Sateen Roya @ Cake Shop
Roya is the new band from Rahil of Habibi and features the Clean's Hamish Kilgour and Jay from French Miami. Also on the bill: art pop songwriter Alice Cohen who has been making music for decades, and her current project as a solo artist is a regular on the NYC DIY scene.

Quarterbacks, Free Cake For Every Creature, Stephen Steinbrink, Alice @ Shea Stadium
Olympia songwriter Stephen Steinbrink makes very good dreamy indie pop on his newest album, Arranged Waves. He hits NYC tonight and will be joined by quality locals: Double Double Whammy labelmates Quarterbacks and Free Cake For Every Creature, who both make lo-fi pop that comes from the bedroom but works pretty well on stage too.

Told Slant, Big Neck Police, Bluffing, Huge Pupils @ Silent Barn
DIY pop collective Told Slant are good recorded but they really come alive at their shows in a way you may not expect from listening to their albums. Local indie popsters Bluffing are cool too.

Today is also the NYC Marathon who will be inspiring the whole city and making it difficult for some to cross the street. Go out and cheer them on.