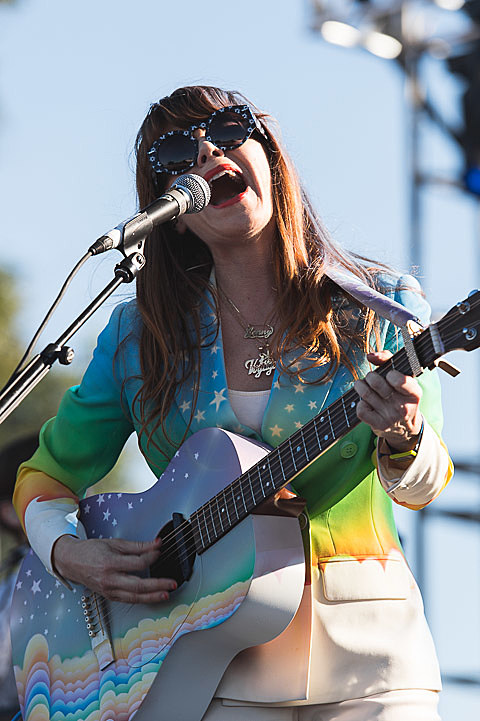 Jenny Lewis, Girlpool @ Terminal 5
Jenny Lewis is on the road supporting her quality new solo record, and the former Rilo Kiley singer's been working in a few cuts from her old band too. Opening the show is young and rising LA duo Girlpool, who made a big impact on NYC during CMJ. Tonight's sold out, and the same lineup plays a Long Island show tomorrow too.

The xx @ Guggenheim Museum
Following The xx's 25 shows for 40 people each in NYC in March, the band's performance tonight is another unconventional one. It's part of the Guggenheim International Gala benefit, which is sold out.

Deerhoof, Assembly, Zannie Owens w/ Mount Yucca @ Baby's All Right
Celebrating their 20th year as a band and the release of another strong album (La Isla Bonita), Deerhoof remain an arty indie rock dynamo live. This is their second of three consecutive nights at Baby's.

Black Pus, Ryan Sawyer, Skimask, Lair, Bugs & Rats @ Death by Audio
You're running out of chances to visit DbA before it closes later this month. Here's a fine opportunity for that and a night of experimental noise, headlined by Black Pus, aka Lightning Bolt drummer Brian Chippendale.

The People's Temple, Sharkmuffin, Kissing Is A Crime, Beechwood @ Glasslands
Lansing, MI band The People's Temple released Musical Garden earlier this year, which is arguably their best offering to date, mixing their established garage-psych influences with solid musicianship and songwriting.

New York Comedy Festival
Laughter invades NYC the day we might need it post (post midterm elections), with a host of big-league talent and venues all over the city. Wednesday's offerings include Kyle Kinane at Union Pool, Time Out's "Women of Comedy" at Le Poisson Rouge, and "Race Wars" at the Comedy Cellar with Kurt Metzger, Sherrod Small, Dave Attell, Artie Lange and more. Check the NYCF schedule for ticket availability.

Lucero @ Bowery Ballroom
It's the final night of Lucero's 3-night run at Bowery Ballroom which finds the country punk band playing a stripped down set, taking a cigarette and whiskey break, and returning for the full-band rowdy stuff.

Frankie Cosmos, Little Big League, LVL UP, Eskimeaux @ Shea Stadium
It's the record release show for Philly indie rockers Little Big League, who just put out their very solid sophomore LP on Run for Cover (and will unfortunately not be playing shows for a while after this and Friday's Philly show). The rest of the bill is also not to miss -- twee popster Frankie Cosmos is headlining, Eskimeaux (Gabby of Frankie's band) is opening, and crunchy trad-style indie rockers LVL UP round out the bill.

Chrissie Hynde @ Beacon Theatre
Though some may say The Pretenders have been Chrissie Hynde's solo project for a while now, she put out what's technically her first-ever solo record this year and brings her tour in support of it to NYC tonight. You can count on hearing plenty Pretenders classics too.

Wolvhammer, Mortals, Mongrel @ The Acheron
It's a good and diverse double bill of metal with the blackened Wolvhammer and sludgy genre-crossers Mortals.

The Magician , JDH & Dave P @ Output
FIXED is presenting tonight's show at Output, and it's a good one with Belgian DJ and former Aeroplane member The Magician. FIXED regulars JDH & Dave P are on board too.

Big Terrific @ Cameo Gallery
Max Silvestri hosts the free weekly comedy show in the back of Williamsburg's Cameo. No word on who's performing tonight, but Max usually lets us know via his Twitter.