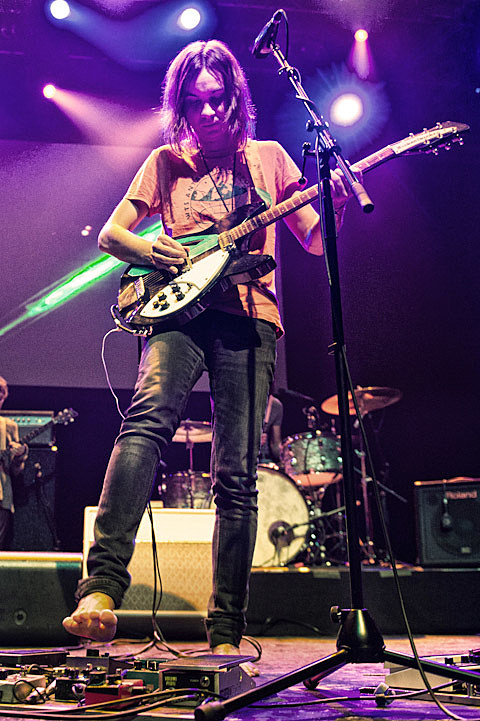 Tame Impala, Delicate Steve @ Beacon Theatre
Australian psych band Tame Impala make an appealing bombast, striking that fine balance between weird and poppy. It's been two years since their breakthrough Lonerisms, but a live album was released earlier this year. You can, of course, see them tonight and Monday at Beacon Theatre.

ANTEMASQUE, Le Butcherettes @ Bowery Ballroom
It wasn't long ago that The Mars Volta broke up and At the Drive-In's reunion ended, leaving co-leaders Cedric Bixler-Zavala going solo and Omar Rodriguez Lopez working with new band Bosnian Rainbows. Well now Cedric and Omar are back together where they belong with a new band, Antemasque, and on bass they're joined by none other than the very busy Red Hot Chili Peppers/Atoms for Peace bass master Flea. Le Butcherettes, whose album featured production and bass playing from Omar and whose singer Teri Gender Bender was in Bosnian Rainbows with Omar, open the show.

Honduras, LOCALS, Truthers @ Cameo
Honduras bring a lot of different influences to the table. A little garage, yes, but there's '80s/'90s British indie too. While it may not be anything you haven't exactly heard before, Honnduras write very hooky songs and, as importantly, the bring a real energy to the performance. Their new EP, titled Break, is out now.

Bob Odenkirk, David Cross, Michael Ian Black, Brandon Wardell @ Gramercy Theatre
Part of the NY Comedy Festival, Bob is on tour promoting his new book, A Load of Hooey (which you get a copy of with your ticket). He'll be reading from it tonight, plus "screening videos, and giving a talk about some highlights of his comedy career." Odenkirk's Mr Show co-creator David Cross is on the bill too, as is Michael Ian Black and Brandon Wardell.

Gruff Rhys @ Baby's All Right
A busy busy man, Gruff Rhys stays creative (and relevant) through all his various musical endeavors (Super Furry Animals, Neon Neon, etc). For his new album American Interiorretraces steps taken by Welsh settler John Evans. Fond of props, humor and other gizmos, Gruff never lets that stuff get in the way of his songs. One of the greats. This noon show (11:30 AM doors) is free and all ages with a signing afterwards.