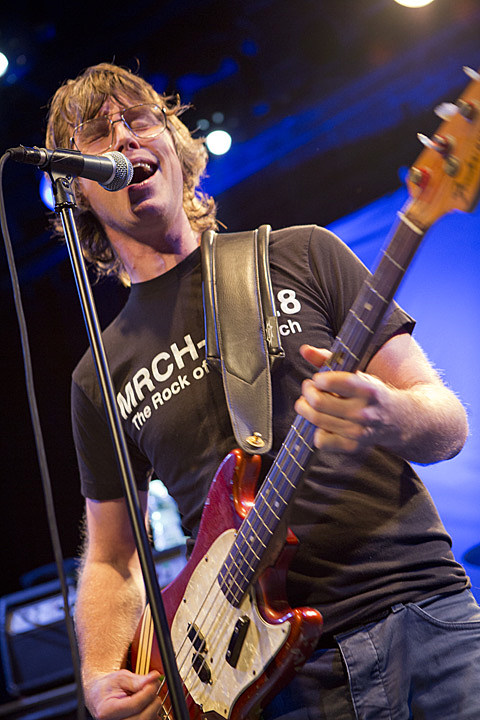 Sloan @ Bowery Ballroom
Canadian greats did something different on their 11th album, Commonwealth, giving each of the four members a side to do with as they please. It's another winner in one of the strongest discographies of the last 20 years. Tonight is an "evening with Sloan" including an intermission and upwards of 30 songs (including Andrew Scott's 17-minute "Forty-Eight Portraits").

Caribou, Jessy Lanza @ Webster Hall
Our Love, Caribou's recent followup to 2010's excellent Swim, is less focused on the pop songs that album was, and instead heavier on the electronics and great in its own way. Tonight's his first of two NYC shows on his tour with Our Love collaborator/Hyperdub-signed Jessy Lanza.

Will Butler @ Baby's All Right
Will Butler of The Arcade Fire (and Academy Award nominee) is currently finishing up his debut solo album. He'll preview some of that tonight at this early, sold-out show.

Woolen Men, The Lures, Plates of Cake @ Cake Shop
Portland, OR's Woolen Men have a minimalistic style that owes much to Wire and early Flying Nun, with no extraneous instrumentation getting in the way. They're good and this is your last chance to see them in NYC on this go-round.

Pygmy Shrews, Mike Berdan, Pleasure Industry @ Death by Audio
NYC noisemerchants Pygmy Shrews broke up in 2012 but have reunited to say farewell to Death by Audio. (Streams below.) It's a full night of heavy, bruising punk.

Johnny Marr, Meredith Sheldon @ Gramercy Theatre
Recalling his prolific days with The Smiths, Johnny Marr has banged out two albums in a year's time. They're not at his 1985 peak, but they're not bad either. He's a lot of fun live, and peppers hit sets with oldies -- any chance to see him play "The Headmaster Ritual" is worth considering. His first of two sold-out NYC shows.

Big Muff Radio, Honduras, Dances, Journalism, Grey Idols @ Silent Barn
Honduras bring a lot of different influences to the table. A little garage, yes, but there's '80s/'90s British indie too. While it may not be anything you haven't exactly heard before, Honnduras write very hooky songs and, as importantly, the bring a real energy to the performance. Their new EP, titled Break, is out now.

Onelinedrawing, Zvl, Mount Gomery, Natural Stranger @ Saint Vitus
Jonah Matranga's been in many bands (Far, New End Original, Gratitude, etc) and he's currently in a band with J. Robbins called Moral Mazes that hearkens back to his heavier '90s sound. But Onelinedrawing is his chance to strip things down, and he'll be in that mode tonight. Onelinedrawing returns to NYC later in the month and J. Robbins will be at that one too.

Electric Youth, Midnight Faces @ Music Hall of Williamsburg
The first time a lot of people heard Electric Youth was probably their collaboration with College, "A Real Hero," which appeared on the Drive soundtrack, but they've since signed to Secretly Canadian and put out their debut album that showed they've still got plenty more of that quality synth pop in them.