Prince Rama at the Whitney in 2013 (more by Ryan Muir) 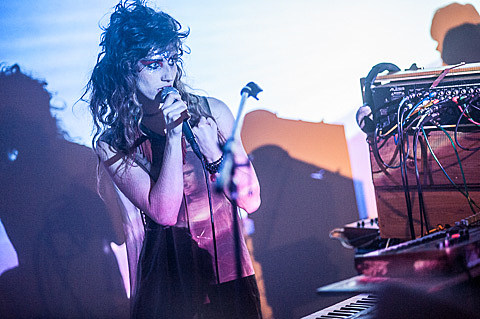 Year of No Light 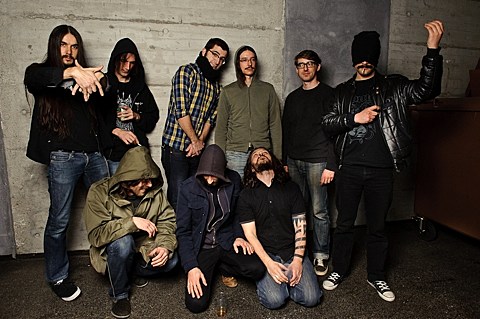 Special Guest, Prince Rama, Cloud Becomes Your Hand, Mr. Transylvania @ Death By Audio
We don't know who tonight's Special Guest is but DbA has been coming through so far on the "special" part. We do know that Prince Rama will be performing a "special interactive dance performance," and the rest of the bill falls somewhere between weirdo electronics and performance art.

Year of No Light, Oneirogen, Geryon, Psalm Zero @ Saint Vitus
France's Year of No Light have been making very high quality instrumental post-metal since their 2006 debut, yet in all those years they never played the US. That's finally changing on their current tour, which comes to NYC for the first of a two-night run at Saint Vitus tonight. The openers on both nights are different and all of them are killer artists in NYC's experimental metal scene.

Mitski, Johanna Warren, Eskimeaux, Told Slant @ Silent Barn
Mitski's new album, Bury Me At Makeout Creek, is out this week and it combines the strong songwriting she honed on her earlier indie/classical material with distortion-heavy lo-fi rock. It's an excellent mix, and one of the more unique sounding albums to come out of the Brooklyn DIY scene lately. Tonight she kicks off her tour in her hometown, and it's a good bill all around with folk singer Johanna Warren and Epoch Collective bands Eskimeaux and Told Slant who share members.

Cult of Youth, Mommy, Aischrolatreia @ Trans-Pecos
Cult of Youth's neo-folk/post-punk blend only sounds bigger than ever on their brand new album, Final Days. Tonight's a one-off in their hometown to celebrate it.

Low Fat Getting High, Dead Stars, Black Black, Iska Dhaaf @ Cake Shop
Brooklyn punks Low Fat Getting High have been a regular on the local scene for a while now, and this week they put out their debut LP. They're joined by quality indie rockers Dead Stars to celebrate it tonight.

Buddy Guy, Quinn Sullivan @ BB King Blues Club
Born in Louisiana but schooled on Chicago Blues as part of Muddy Waters' band in the '60s, where he was also a house musician for Chess Records. A true legend.

Cunninlynguists, J-Live, Tonedeff, Pack FM @ Webster Hall
The very prolific Southern rap trio CunninLynguists returned with a new mixtape this year which was another excellent example of their lyrical flow and psychedelic soundscapes.

The Singles, Banker$, Dennis Cahlo & the Change, and Rally @ Pianos
The Singles were an '00s-era Detroit band who dared not be be garage but power pop, releasing three albums before fizzling out. Frontman Vince Frederick and reactivated the band in Los Angeles with another Detroiter, Nicky Veltman, and just released Look How Fast A Heart Can Break, the first new Singles album in six years.

PAT w/ JD Samson, Amber Valentine @ Union Pool
PAT is JD Samson's dance party "for anyone from anywhere wearing anything and loving whoever they want" and takes over the front and back rooms of Union Pool.

Friend Roulette, Del Vinicci, Wedding Dress, The Bears @ Shea Stadium
Wedding Dress count Erin Elders of Maps & Atlases and Bobby Burg of Joan of Arc as members, and though you may expect math rock with a resume like that, these guys actually scale back the technicalities in favor of more laid back indie pop. Local chamber pop band Friend Roulette headline the night and they're worth catching too.

D.D. Dumbo, Palm Springs, Mechanical River @ Baby's All Right
Australia's D.D. Dumbo, who we caught at Pitchfork Paris, is one of 4AD's newest signees and is a one-man band who runs guitars, drums and woodwinds through a loop pedal to create his heavily layered sound. Tonight's his first public NYC show (following a private show at The Standard last night).