Caribou at Governors Island in 2010 (more by Andrew St. Clair) 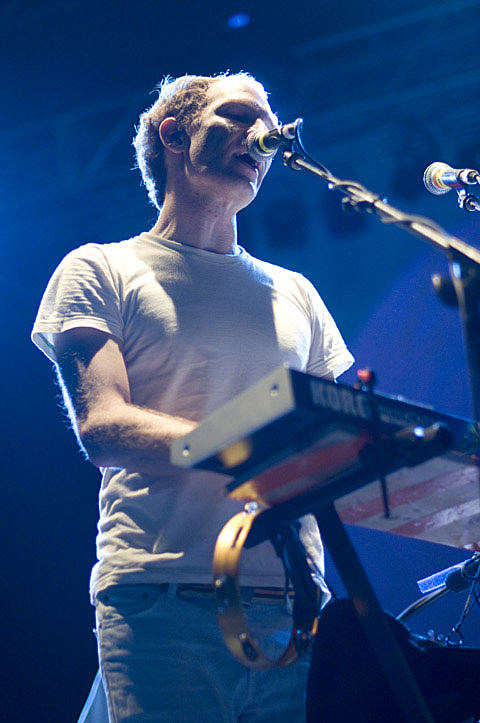 Special Guest, Guantanamo Baywatch, The Numerators, RIPS @ Death By Audio
We're down to nine days left at Death by Audio. It's anybody's guess who tonight's special guest is, but the rest of the lineup is garagey, surfy-punky stuff highlighted by Portland's fun Guantanamo Baywatch.

Year of No Light, Sannhet, Gnaw, Vilkacis @ Saint Vitus
France's Year of No Light have been making very high quality instrumental post-metal since their 2006 debut, yet in all those years they never played the US. That's finally changing on their current tour, which is now in NYC and concludes a two-night run at Saint Vitus tonight. Like last night, the show begins with three killer artists in NYC's experimental metal scene.

Caribou, Jessy Lanza @ Webster Hall
Our Love, Caribou's recent followup to 2010's excellent Swim, is less focused on the pop songs that album was, and instead heavier on the electronics and great in its own way. Tonight's his second of two NYC shows on his tour with Our Love collaborator/Hyperdub-signed Jessy Lanza.

Johnny Marr, Meredith Sheldon @ Stone Pony
Recalling his prolific days with The Smiths, Johnny Marr has banged out two albums in a year's time. They're not at his 1985 peak, but they're not bad either. He's a lot of fun live, and peppers hit sets with oldies -- any chance to see him play "The Headmaster Ritual" is worth considering. Unlike his two sold-out NYC shows, tickets are still available to this.

Say Hi, Tim Foljahn @ Mercury Lounge
Seattle's Eric Elbogen is still making quality indie pop under the Say Hi moniker which hasn't changed too much since the mid-2000s, and not in a bad way. Opening this show is Michigan's Tim Foljahn, who's been playing since the '80s and was once in a band with fellow Michigan musician Steve Shelley.

O'Death, Death Vessel, Stone Jack Jones @ Bell House
O'Death's new album is dark and super raw folk that fits their name well. Death Vessel on the other hand may share a name with "death" in it but he makes much more uplifting music. And another dark songwriter, Stone Jack Jones, opens the night. Should be a good show all around.

Animal Collective (DJ set) @ Brooklyn Bowl
While Panda Bear has a new solo record on the way, the other three AnCo guys are taking the chance to go on this DJ tour which hits Brooklyn Bowl again tonight. The tour returns to the same venue in December too (but without Avey Tare).

Dustin Wong, Takako Minekawa, Ricky Eat Acid, Tristan Allen, Trabajo @ Palisades
Former Ponytail guitarist Dustin Wong moved back to his childhood home of Japan after completing his trilogy of loop-based albums and began collaborating with musician Takako Minekawa. Using a specially designed interface that allows them to switch from guitar to keyboards to sampler to vocals, their music is creative and playful. The duo's second album together, Savage Imagination, came out via Thrill Jockey in September.

Sallie Ford, Crooked Fingers, And The Kids @ Rough Trade
While Sallie Ford and the Sound Outside came to an end last year, Sallie is still at it with a new band and they come to NYC tonight. Archers of Loaf singer Eric Bachmann is also on the show with his Crooked Fingers project, making for a great double bill.

Foxes in Fiction, Mister Lies, Emily Reo @ Shea Stadium
If you're into bedroom-recorded, electronic-tinged lo-fi pop, basically everyone on this bill will be up your alley.

Javelin, Tiny Victories, Idgy Dean, Nadia Kazmi @ Brooklyn Night Bazaar
Chillwave survivors Javelin play tonight at the weekend mecca of music/shopping/games/booze. The bands are free, you're paying for everything else.

Heavy Lights, Doug Gillard, Tinnarose, Bird of Youth @ Cake Shop
Doug Gillard's CV is impeccable, having logged time in Guided by Voices, Nada Surf, My Dad is Dead to name three. His his new solo album, Parade On, is an equally impressive array of sparkling powerpop.

Mike Wexler, Hubble, Psychic Reality @ Trans-Pecos
Psychedelic folk singer Mike Wexler and former The Men member Ben Greenberg with his experimental project Hubble team up for this show which should be nice trippy vibes all around.

Blockhead, Elaquent, Muneshine @ Glasslands
In addition to producing a significant amount of Aesop Rock's material (and other likeminded rappers like Cage, Open Mike Eagle and Murs), Blockhead has a ton of solo material including this year's Bells and Whistles LP.

Suzanne Vega @ Joe's Pub
She may be be best known for "Luka" and "Tom's Diner" (both from 1987's Solitude Standing) but Suzanne Vega's gift for songwriting has continued since. She plays an early and a a late show tonight.

Ray Lamontagne, The Belle Brigade @ Beacon Theatre
Singer/songwriter Ray LaMontagne released the Dan Auerbach-produced album, Supernova, earlier this year. Tonight he wraps up a 3-night run at Beacon Theatre in support of it.

All Out War, Sworn Enemy, Living Laser, Panzerbastard, Recycled Earth @ The Acheron
Metallic New York hardcore band/Victory Records vet All Out War have been at it for over two decades now and they've been talking about having a new album on the way. Maybe we'll hear some new ones tonight?

Phil Lesh @ Capitol Theatre
As any Deadhead can tell you, Phil Lesh plays the favorites and his current band does it well. It's another night of his never-ending residency at The Cap, and these shows are always a good time.

Sharkmuffin, Chimes, Painted Zeros, Slight, Routine Involvements @ Silent Barn
Brooklyn garage rockers Sharkmuffin are always a good local band to catch, and if you're going tonight you may also want to check out Painted Zeros, who pal around with Porches, LVL UP, Crying and other cool local bands.