Thee Oh Sees at DbA in June (more by PSquared) 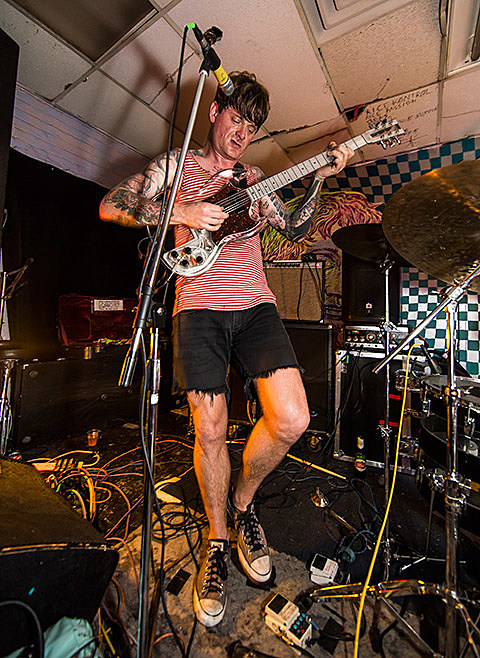 Top Secret! @ Death By Audio
It's the SECOND TO LAST night of the much-loved Death by Audio and none of the remaining lineups have been announced. Who could it be tonight?

Thee Oh Sees, Jack Name @ Warsaw
While it's a new backing band, John Dwyer brings the same intensity as ever with his new line-up of the Oh Sees. Final night of their NYC run.

TV on the Radio, Natasha Kmeto @ Music Hall of Williamsburg
TV on the Radio may not all live in NYC anymore but it remains their spiritual home. They celebrate their new album, Seeds, with four shows here this week. This is the third.

Natural Child, Las Rosas, The Mystery Lights, Boytoy @ Baby's All Right
Nashville's Natural Child released Dancin' With Wolves via Burger back in February, which furthers the band's take on party-friendly southern-fried rock. These guys are great musicians and put on a very fun live show too. It's a Burger-loving bunch of bands rounding out this bill. Will be a fun Friday night.

Polaris, Ski Lodge @ Knitting Factory
Mark Mulcahy of Miracle Legion also fronted this band which basically only existed to do songs for much-loved '90s Nick show The Adventures of Pete & Pete. Go ahead sing "Does your dog bite?" to the main theme song tonight, even though you know it's actually "Don't you talk back." BV's presenting this sold-out show.

Raven, October 31, Night Demon, S.A. Adams, Midnite Hellion @ Saint Vitus
NWOBHM legends Raven have been at it for over forty years, and even on their newest album, 2009's Walk Through Fire, they were ripping with the kind of speed, monster riffage and wailing vocals as their '80s material. They've been talking about new stuff lately too, maybe we'll hear some of it tonight?

Brooklyn Youth Chorus performing 'Black Mountain Songs' @ BAM @ BAM
In addition to The National's Bryce Dessner and Arcade Fire's Richard Reed Parry being members of two of the biggest indie bands around, they're also regulars in the indie/classical scene and they've now co-curated a new piece 'Black Mountain Songs' that made its world premiere at BAM last night and continues with peformances tonight and Saturday. The piece features music by Dessner and Parry, as well as by Jherek Bischoff, Tim Hecker, Nico Muhly and others.

Big Freedia, DJ Concerned @ Brooklyn Bowl
Ain't no party like a Freedia party, as anyone who goes to Brooklyn Bowl tonight will surely experience. This starts laaate (12:15 AM), so you can even hit another show tonight and then dance your way into the morning. She does it again tomorrow too.

Cold World, King Nine, Life of Reilly, Snail's Pace @ The Acheron
The Deathwish-signed Cold World are the hardcore band with the hip hop influences (and choice collaborations -- Kool G Rap, Sean Price and Meyhem Lauren are all on their new record) but if that's setting off nu metal and rap rock alarms in your head, know that Limp Bizkit this is not.

Occultation, Kosmodemonic, Mountain God, Think Tank @ Palisades
The perfectly named Occultation hearken back to late '60s occult rock and early '70s doom with their witchy riffage, and they have a theatricality that Mercyful Fate fans should dig too. Tonight they're with the sludge/psych band Kosmodemonic and more.

Ryan Hemsworth, Tennyson, Doss @ Rough Trade
While Ryan Hemsworth has helmed beats for rappers like The Underachievers and Deniro Farrar, he's also got a good amount of solo material and has been dropping singles ahead of a new upcoming release. Before we get that though, we get two NYC shows from Ryan, this being the second.

Painted Zeros, Turnip King, Shadow Walker, Ritual Howls @ Aviv
While DbA is in it's last two nights, this marks the opening of a new DIY venue in Greenpoint. We hope for good luck, good sound, cheap(ish) drinks, and good lineups to come.

Slavve, Burglary Years, Makeshift Shelters, The Glazzies @ Shea Stadium
Lo-fi rock duo Slavve feature an ex-member of Surfer Blood and make a similar kind of racket to other lo-fi rock duos like No Age and Japandroids.

ASTR, Ghost Beach, Body Language (DJ set) @ Knitting Factory
Knitting Factory's 5th anniversary in Brooklyn celebration continues with two shows tonight. The sold-out Polaris show is the early one, but after that you can stick around for this synth pop-oriented bill.

The Sons & Heirs (A Tribute to The Smiths & Morrissey), Doug Gillard @ Santos Party House
As far as tribute acts go, The Sons & Heirs are very good at what they do, and seeing the awesome Doug Gillard may give you a legit reason if you want to go. You could meet somebody who really loves you.

Wheatus, Math the Band, Late Cambrian, .357 Lover, Hand Job Academy @ The Wick
We haven't followed Wheatus's career too closely (have you?), but how can we not mention that the band who wrote "Teenage Dirtbag" is playing in Bushwick tonight?