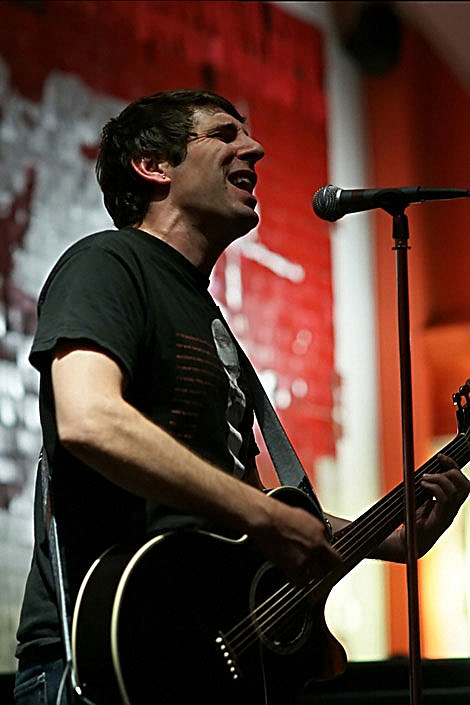 Frank Bell, Jonah Matranga, J. Robbins, Doris Cellar (of Freelance Whales) @ Mercury Lounge
Having spent time fronting Far and Jawbox respectively (plus like a ton of other bands), Jonah Matranga and J. Robbins are two of the greats of '90s post-hardcore and this year they joined forces for the collaborative band Moral Mazes which sounds straight out of their prime era. Tonight they play separate solo sets, but maybe we'll get some collaborations too?

Ballroom, Nots, Degreaser, Cyanide Tooth @ Palisades
If your idea of punk is more of the '70s Detroit variety (or what's going on in Melbourne, Australia these days), you'll dig this lineup featuring Memphis quartet Nots whose terrific new album is just out on Goner.

Rhyton, Fadensonnen, Key Of Shame @ Trans-Pecos
Rhyton put out a new record on Thrill Jockey this week which has them taking lengthy instrumental trips through Middle Eastern melodies and psychedelic rock. See them bring those jams to life tonight.

Brooklyn Youth Chorus, Bryce Dessner of The National (co-curator), Richard Reed Parry (co-curator) @ BAM
In addition to The National's Bryce Dessner and Arcade Fire's Richard Reed Parry being members of two of the biggest indie bands around, they're also regulars in the indie/classical scene and they've now co-curated a new piece 'Black Mountain Songs' that made its world premiere at BAM on Thursday night. Tonight concludes the piece's four-night run. It features music by Dessner and Parry, as well as by Jherek Bischoff, Tim Hecker, Nico Muhly and others.

Walter Schreifels & the Dead Heavens, Sneeze, Raw Blow, Vomitface @ Shea Stadium
It's a tough night for fans of veteran post-hardcore frontmen between that Jonah/J show and this. Walter (of Gorilla Biscuits, Quicksand, Rival Schools and more) takes a Cream/Sabbath-inspired heavy blues approach for the Dead Heavens, one of two new bands he's got this year. The rest of this bill is pretty good too.

Manilla Road, Natur, Python @ Saint Vitus
Kansas metal legends Manilla Road put out a handful of classic albums in the '80s that experimented with thrash, NWOBHM, power metal, prog and '70s proto-metal. The only constant member has been frontman Mark "The Shark" Shelton, but his current bandmates are no slackers. Tonight's the second of a 2-night stand at Vitus this weekend.

Ed Askew Band, Hartley C. White, Ruth Garbus, Jib Kidder, Moth Eggs @ Silent Barn
Ed Askew's story is a familiar one to fans of any now-better-known artists like Nick Drake and Vashti Bunyan. He had one record in the late '60s, Ask the Unicorn, which became considered an overlooked classic many years later. He's released other albums over the years too, and luckily for us he's more active now than ever with new music and live shows coming pretty frequently. This bill also includes Ruth Garbus (sister of tUnE-yArDs' Merrill Garbus) and others.

Couch Slut, Derek Reinhardt, Ora Iso, 1MITATOR @ The Acheron
NYC's Couch Slut have only been around for about a year but they've quickly become one of the better known bands on the local heavy scene thanks to a killer, unrelenting mix of metal, hardcore and noise rock that's not quite like other bands in this scene. Ba Da Bing-signed droners Ora Iso are worth getting there early for.

Hess is More @ Nublu
Having just released a remix EP, the eight-piece lineup of Hess Is More bring their jazzy/krauty/funky sound to Nublu as part of a four-night residency. If you like DFA style dancerock, they're worth checking out.