Strand of Oaks in Austin in 2012 (more by Tim Griffin) 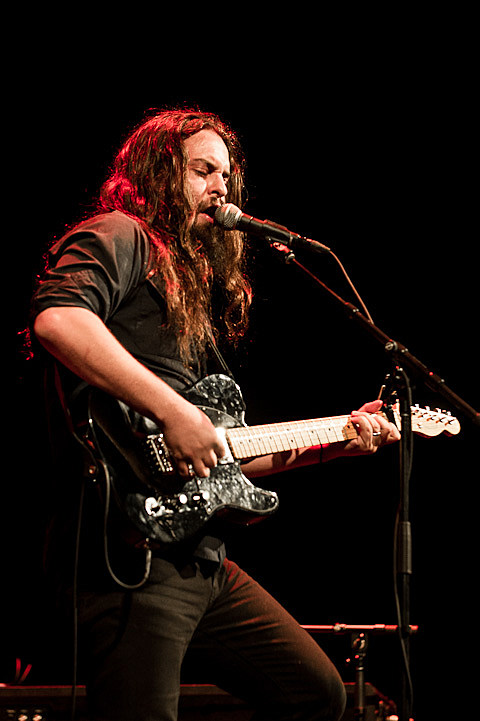 Yo La Tengo, The Feelies @ Town Hall
While their Maxwell's Hanukkah shows are sorely missed, Yo La Tengo will be celebrating the season -- and their 30th anniversary -- with two shows at Town Hall, tonight being the second. Tonight's show is with another legendary NJ indie rock outfit. Sold out.

tUnE-yArDs, Cibo Matto, Beep! @ Music Hall of Williamsburg
tUnE-yArDs dove further into their world of quirky, eccentric pop on this year's Nikki Nack, and Cibo Matto returned with their first album since 1999 which had them still in good form. Tonight begins their 4-night run at MHOW.

Dee Dee of Dum Dum Girls with Ice Choir @ Converse SOHO
This free in-store performance sounds kinda cool: Dee Dee doing a full set of Dum Dum Girls songs as backed (and arranged) by Kurt Feldman's new romantic synthpop outfit Ice Choir. It's a free show (one of a few around the country) in celebration of a new multi-artist holiday EP that will be available on vinyl only at these shows.

Strand of Oaks, Torres @ Bowery Ballroom
Strand of Oaks made the move from an introverted folk singer to a big-sounding folk rock band this year, and the change has been pretty successful. Tonight's their largest headlining show in NYC yet, and it's a great double bill with Torres' grungy folk.

New Build, Future Punx, Orange Cassettes @ Rough Trade
New Build, the side project of Hot Chip's Al Doyle and Felix Martin, play their second NYC show of the week. This one is without tourmates Museum of Love but in their place are local new wavers Future Punx, and Orange Cassettes which is the new band from Radio 4's Anthony Roman.

TEEN, Beverly, Charly Bliss, Scully @ Glasslands
TEEN have played Glasslands many times over the last few years and will say goodbye to the soon-to-close venue as part of a very good bill of indie rock.

Junius, So Hideous, In Aeona @ Saint Vitus
Tis the season to be jolly, and Prosthetic Records are celebrating with a decidedly un-jolly holiday party at Saint Vitus tonight. Heavy post-rockers Junius and likeminded locals So Hideous will stack this show with dark atmospheres. Admission gets you a free glass of Prosthetic Imperial Black Ale brewed specially for the occasion by Sixpoint Brewery.

Oliver, Plastic Plates, Alex English, Dali, Hiyawatha, Maximillion Dunbar, Shawn Reynaldo, Contakt, Bobby B @ Output
Dance duo Oliver get funky on their new Light Years Away EP for Fool's Gold. They're on tour in support of it, hitting Output for their weekly INPUT party tonight with Plastic Plates and some of the Girls & Boys DJs. Maxmillion Dunbar and others are in the Panther Room.

Low Fat Getting High, Grizzlor, Ceramics, biggpigg @ Grand Victory
Low Fat Getting High have been one of the more promising bands in Brooklyn's DIY rock scene as of late thanks to their catchy and aggressive grunge/punk hybrid. Their debut LP finally came out a few weeks ago, and tonight they'll likely be ripping through plenty of that.